Little People Big World stars Tori Roloff and Audrey Roloff were together this weekend for a very special family event. These two in the past were the best of friends, and in recent years there’s been somewhat of a rift. Now the two sisters-in-law, their daughters, and family gather to celebrate a woman they all hold dear to their heart. Continue reading to see what brought these two Roloff woman together.

Little People Big World matriarch Amy Rollff will marry her fiance Chris Marek later this month.  After considerable discussion, the couple decided the wedding will take place at Roloff Farms. After all, that is where they met at a pool party at Amy’s former farmhouse. So, of course, the farm is special to them, as well as the history Amy had lived there for over thirty years.

The Little People Big World family has been busy taking care of the pre-wedding details. Amy’s son Zach Roloff and her oldest grandson (and ring bearer) picked up their tuxedos. Now, as the countdown to the big day dwindles, one special milestone event still needs to happen. So this weekend, the women near and dear to Amy Roloff’s heart gathered to shower the bride.

Little People Big World celeb Tori Roloff and her sister-in-law Audrey Roloff were two of the women gathered to shower the soon-to-be Mrs. Marek this weekend. Also at the shower were Amy’s two granddaughters, Ember Roloff and Lilah Roloff. The party was small and intimate—just Amy’s closest friends and family. No doubt Ember and Lilah stole the show. After all, they are super cute and adorable. However, Amy relished in joy as she celebrated her upcoming nuptials with the ladies and girls she loves most.

Little People Big World fans long believed there was tension between Tori and Audrey. The two used to be together all the time. However, in recent years, the once besties seemed at odds with each other. Fans noticed milestones of the lades that neither partook in. Now with the Roloff sisters-in-law together with their daughters at Amy’s bridal shower, those rumors seem to be squashed finally. 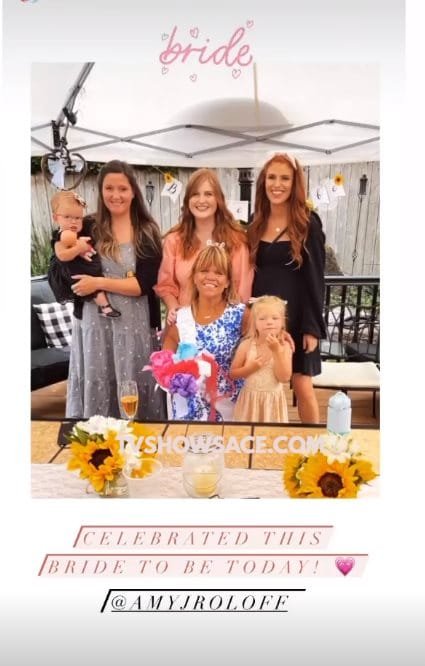 LPBW fans also noticed Caryn Chandler, Amy’s ex-husband Matt Roloff’s long-time girlfriend was not present. Amy’s made it clear they are cordial but certainly not friends. Additionally, neither Matt and Caryn were invited to Amy and Chris’s August 28, 2021 wedding, even though it will take place on Roloff Farms.

Make sure to check Tv Shows Ace often for all the latest Little People Big World news, updates, and spoilers.