Duggar cousin Amy King is proving that she’s not following her family’s strict modesty standards. Over the years, she has shown Counting On fans that she’s not like the rest of the Duggars. By most people’s standards, she’s not doing anything scandalous, but as the niece of Jim Bob Duggar, it’s a big deal. She sometimes drinks wine and wears bikinis in her Instagram photos. Amy is also a successful small business owner and only has one child right now. She has ignored plenty of other Duggar rules too.

Amy has gotten a lot of support from Duggar fans who are proud of her for doing her own thing. She’s also bonded with one of her cousins, Jill Dillard, who’s stepping away from many of her parents’ strict rules as well. Now, Amy is taking things a step further by posting a few photos from her recent photo shoot. It’s safe to say that Jim Bob wouldn’t approve of these photos.

On Instagram Friday, Amy shared a few new pictures. She had a professional photo shoot in honor of National Breastfeeding Week. In the photos, she’s wearing a long, floral dress as she nurses her son Daxton in a field. Amy writes, “Love in every drop…” Daxton will turn two years old in October. 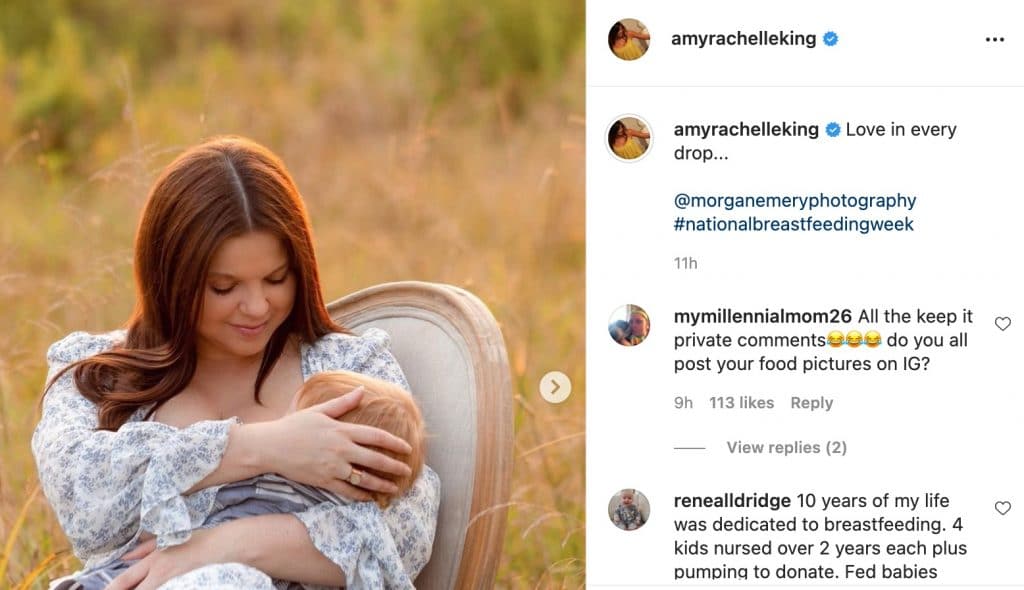 While Jim Bob wouldn’t be happy with these photos, Amy seems to be. So many fans are proud of her for breastfeeding her son for so long and they think the pictures are the perfect way to honor her breastfeeding journey. They appreciate this celebration. One fan applauds Amy, writing, “Yes girl! Normalize breastfeeding toddlers and beyond!! 🙌🙌🙌” Plenty of others share similar sentiments with her.

In a recent social media post, Amy reflected on the first year and a half of motherhood. She shared a few pictures of her breastmilk and a snap of herself crying too, warning that this was an emotional post. She wrote, “Dill was cleaning out our deep freeze.. and he found the last few bags of milk and it hit me… it’s time to store the pump away.”

So, what do you think of Duggar cousin Amy King’s new photoshoot? Do you love the message she shared? Let us know in the comments below.