Brandi Glanville has been admitted to the hospital with a mystery illness. According to Page Six, the former RHOBH star shares the news of her hospitalization with her social media followers on Instagram.

Glanville reveals that her hand began swelling, causing her alarm. She headed to the local emergency room, and doctors on call began ordering numerous tests. The reality star reveals that doctors have ordered her to stay put in the hospital. Glanville claims that her doctors are a little baffled by her condition and will be administering more tests. 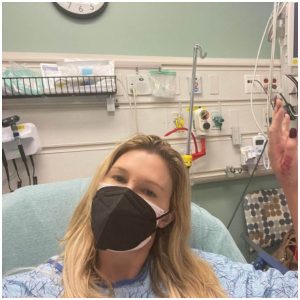 At the moment, it is unknown as to the cause of Brandi’s condition. However, physicians believe Brandi may be suffering an allergic reaction and infection due to an animal bite.

“We are not exactly sure what we are dealing with,” she captioned a picture of herself from a hospital bed. “We believe it may be an infected spider bite.”

Brandi reveals photos of her swollen left hand, stating she believes she may have been bitten overnight while sleeping. Glanville adds she is so busy that she is not sure she has time to make a doctor’s visit. Thankfully, former Bravo star fans immediately began commenting, advising her to seek treatment asap.

One subscriber urgently posts, “Please go to the doctor asap! I had a spider bite, and the doc said it could have killed me if I didn’t get on Antibiotics right away. Go. Now. Please!” 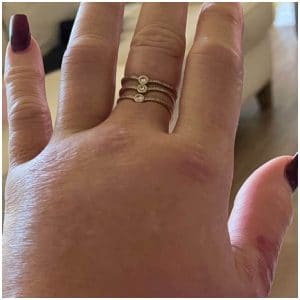 Brandi Makes Nice With Ex For Son’s Day At College

Glanville’s medical drama comes just weeks after she, LeAnn Rimes, Eddie Cibrian have made amends. The seemingly happy family reunited to spend the day with Brandi and Eddie’s son, Mason Cibrian, 18, but, only to help prepare him for college.

All appears well and good between Glanville and the Cibrian’s. Who, at the time seem to be smoothly navigating through their co-parenting duties. However, history and fans are well aware that a family war could commence at any given time between country singer LeAnn Rimes and actress Brandi Glanville.

On Tuesday, the 48-year-old former RHOBH star recently updated fans, stating that her doctors believed a spider bite brought on the infection. “They said I could lose a limb, so I’m chilling -ON A TUESDAY!!!!”

Glanville assured fans that she was okay, captioning the post, “Hey guys, yes, I was admitted to the hospital yesterday, and I have amazing first responders taking care of me!”

Fans are anxiously awaiting a recent update on Brandi’s condition. Hopefully, Brandi’s issues will be a little less painful for her. But, unfortunately, good luck is not a friend for some current and former RHOBH‘s wives.

Along with Brandi Glanville’s medical emergency, wives Erika Jayne, Dorit Kemsley, and Lisa Rinna are all dealing with their struggles. Thankfully for Erika, Dorit and Lisa, their issues are financial instead of medical. Stay tuned for all the latest RHOBH news.