Andrew Spencer grabbed the world’s attention Monday night on The Bachelorette with his genuine attitude. Bachelor Nation was crushed when Katie tearfully sent Andrew home. He was sure he was getting a rose. Sadly, he didn’t. It seems Andrew and Katie just aren’t meant to be. Now that the episode has aired, Andrew has a message for fans and also a request. Keep reading to find out more from Andrew.

Andrew Spencer has message for fans

Andrew went to Instagram to share a sexy photo of himself along with a heartfelt message. He started out saying, how thankful he is to put smiles on faces around the globe. He said he’s not perfect and he knows not everyone will approve of him.

Andrew went on to say, “I only seek to touch the hearts of few with my life experiences and joyful love. What you saw is 1000% ME. Maybe minus some of the tears.. they put something in the water there in NM 😂 I hope I represented my momma along with family and friends well and hope I continued to improve the way black men on this show are viewed.”

Andrew continued his post thanking Katie for reassuring his belief in love. He continued, “Your strength as a woman set the tone for 30 men to be open and vulnerable something not easily done for men. And for that it brought the guys in the house closer and some to being really good friends of mine.”

He noted that he and Katie had a real connection and real discussions. Andrew also acknowledged how fans loved seeing them together.

He ended by asking a favor from Bachelor Nation. Andrew said, “Oh and can we please Drop the S now and just call me Andrew 😂thanks Bach Nation.” 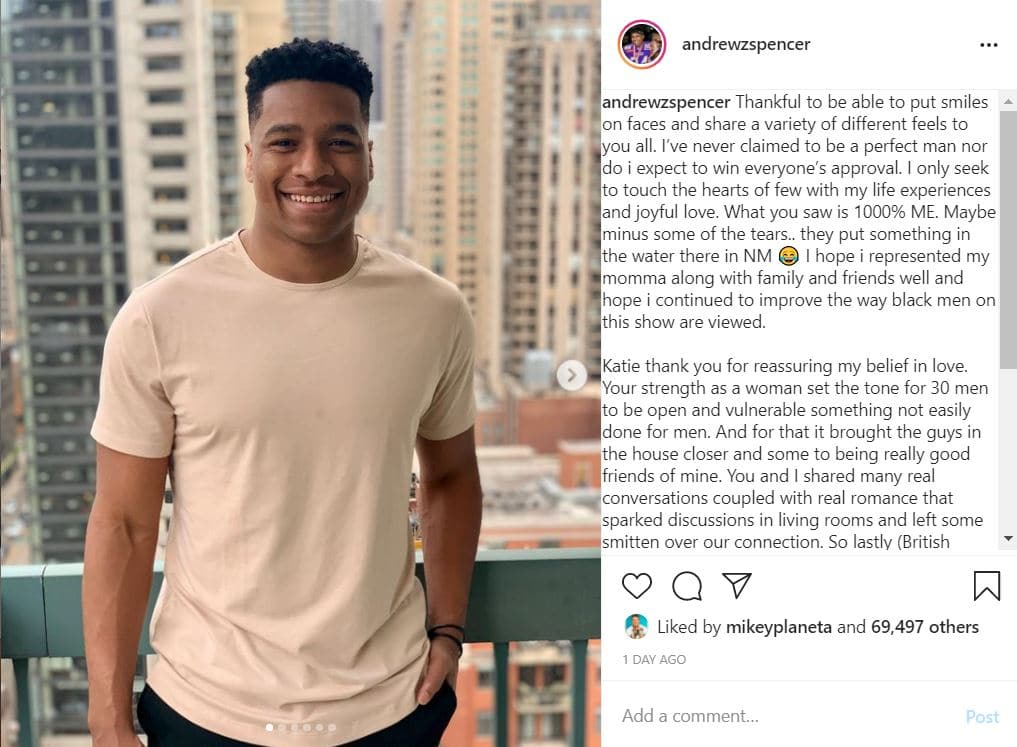 Could he be the next Bachelor?

Since Andrew’s departure then return to end things with a smile, fans have been going crazy over him. Many are hoping he could be the next Bachelor. It certainly seems like he has the right attributes to make a good one. Plus, many feel the note he left behind for Katie and then rejecting her was sort of a Bachelor audition.

While Andrew would no doubt make a great lead, there’s another man who also appears to be in the running. That man is Michael Allio. Fans love the single dad and wouldn’t be unhappy seeing him grace their screens come January. He would be sort of a Jason Mesnick 2.0.

What do you think about Andrew? Would he make a good Bachelor?