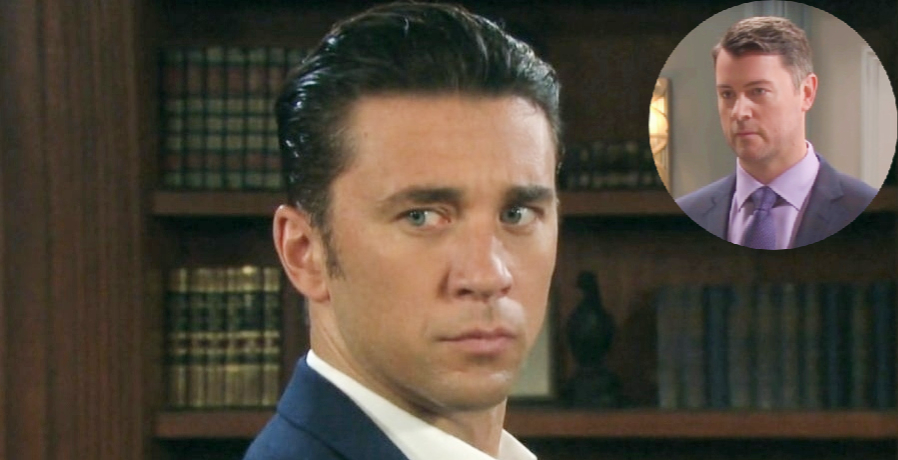 Days of Our Lives spoilers for the week of June 28 reveal Chad DiMera (Billy Flynn) and his older brother EJ DiMera (Dan Feuerriegel) are at odds over the future of DiMera Enterprises. Also, their sister Kristen DiMera (Stacy Haiduk) takes time while on the run from the law to draft a bombshell letter to EJ that could further fuel the drama within the family.

Plus, Ciara Brady (Victoria Konefal) returns to Salem. However, it isn’t quite the reunion her estranged husband, Ben Weston (Robert Scott Wilson), hoped for on the NBC soap.

Days of Our Lives Spoilers: Chad And EJ Are At Odds Over How to Oust Jake

Days of Our Lives spoilers predict the vote to remove Jake DiMera (Brandon Barash) as CEO of DiMera Enterprises will pit EJ and Chad against each other. Both Jake and his brothers are busily tallying the votes behind the scenes. There are several wildcard votes out there. In fact, the newest DiMera, Jake, is blown away by just how big his newfound family is. Now Chad and EJ differ regarding how the extended clan will vote.

Days of Our Lives spoilers suggest Chad and EJ also aren’t on the same page about Kate’s vote as Andre DiMera’s (Thaao Penghlis) widow. Chad knows Kate’s faking her blindness. So he believes her vote should be cast against Jake. However, Kate’s not ready to stop her childish games. She claims she needs to vote “with her man” to keep up the ruse. Although DOOL spoilers suggest, Kate just might shock everyone when her vote becomes the tie-breaking vote.

Days of Our Lives spoilers say EJ DiMera, and on-the-lam sister Kristen DiMera connect via letter. Of course, EJ knows where and how to find his escape artist sister. So as the DiMera family closes ranks to rid the company of mobster mechanic turned CEO Jake, EJ needs Kristen to toe the family line and stay loyal to him, Chad, and Tony for their father’s sake.

However, Days of Our Lives spoilers tease Kristen takes this opportunity to open pandora’s box. Recall while disguised as Susan Banks, Kristen saw Lucas Horton’s (Bryan Dattilo) walk of shame from Sami Brady’s (Alison Sweeney) bedroom at the townhouse. Kristen even blackmailed Sami and Lucas to help with her schemes by threatening to tell EJ about their bedroom antics.

So with nothing at stake for her, DOOL spoilers suggest Kristen spills the beans to EJ about his wife’s affair. Spoilers also say in true DiMera fashion, EJ keeps the intel to himself and uses it to torture Sami and Lucas slowly.

Friday July 2nd: The day we get to see this.

Ben shows up at his apartment to find his gorgeous wife sitting comfortably on his bed waiting for him, with a look on her face like, "I've got a bone to pick with you." 🤣🤣🤣

Days of Our Lives Spoilers: Ciara Returns With Marriage On Her Mind

Days of Our Lives comings and goings confirms the return of fan-favorite actress Victoria Konefal as Ciara Brady on Friday, July 2. Ben is still reeling from the divorce papers Ciara had him served with all the way from South Africa. He’s still holding out hope his wife recalls their love and wants to make their marriage work. However, after Ben has a very vivid dream the day before Ciara turns up at his apartment in the flesh.

DOOL spoilers reveal Ciara didn’t return to Salem alone. Theo Carver (Cameron Johnson) makes the trip with her to attend his sister’s surprise anniversary party. Ben is hopeful Ciara has returned to call off their divorce. However, spoilers predict she’s there to make sure Ben signs the papers so she can move forward with a marriage to her former best friend/ex-boyfriend Theo.

Things are heating up in Salem just ahead of the hiatus for the Summer Olympics, which runs on NBC from Friday, July 23, 2021, through Sunday, August 9, 2021.