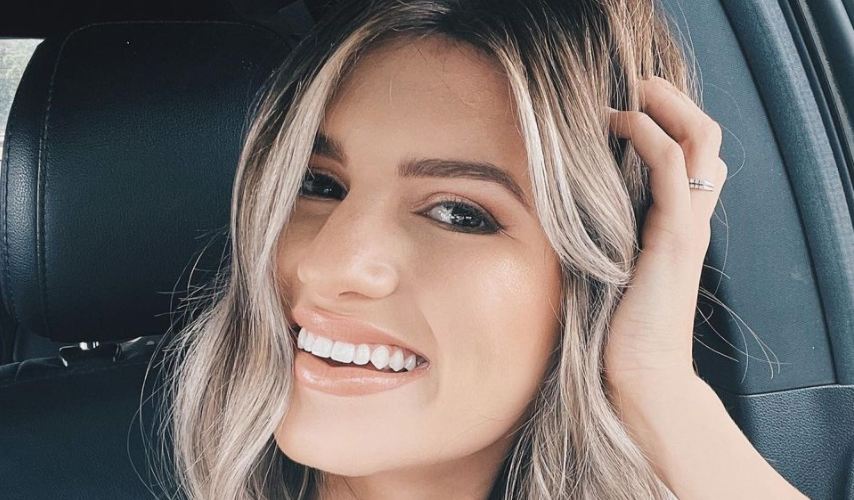 Could Bringing Up Bates star Carlin be pregnant? It seems possible! Both Carlin and Evan Stewart have admitted to having baby fever as they met one of their new nieces, Maci. Now, they have recently met two new additions, Jadon and Hazel. So, their baby fever may be getting even worse. Now, a few hints from Carlin have started pregnancy rumors.

Right now, Carlin and Evan share a one-year-old daughter, Layla. They seem to be absolutely obsessed with the little one and post lots of photos and videos of her on social media.

On social media, Carlin has dropped several hints that she may be pregnant. The first one was posted in one of her Instagram stories. In a clip, Even has his hand on her stomach. A few fans sent in confessions to a Duggar and Bates confession page, saying they think Carlin is expecting.

Further fueling the fire, the Bates Sisters Boutique website has a few photos of Carlin modeling a maternity dress. She’s cradling a baby bump as she shows off the blue dress. At first glance, it looks like Carlin is pretty far along in her pregnancy. On Reddit, a user writes, “I’d be shocked if this was an official announcement and not a leak, because at the minimum I assume Carlin would have done a whole photoshoot and made a vlog about it. No way she and Evan would go so lowkey.”

But in the description for the dress, there’s a note about her wearing a pregnancy bump to show the fit of the dress. When the dress was first uploaded to the site, the note about the pregnancy bump being used wasn’t included. They must have gone in and added it later, Reddit users note.

There’s only one new baby on the way now.

Two of the Bates women gave birth in June, and now, only one other family member is pregnant. Tori and Bobby Smith are expecting their third child this month too. Fans think Carlin will be the next one to be pregnant whether she is right now or not. It’s only a matter of time before one of the Bates families grows again.

So, do you think that Carlin Bates of Bringing Up Bates might be expecting? Or do you think she and Evan Stewart will wait a little longer to have another baby? Let us know your thoughts in the comments below.

For more news about the Bates family, check back with TV Shows Ace.