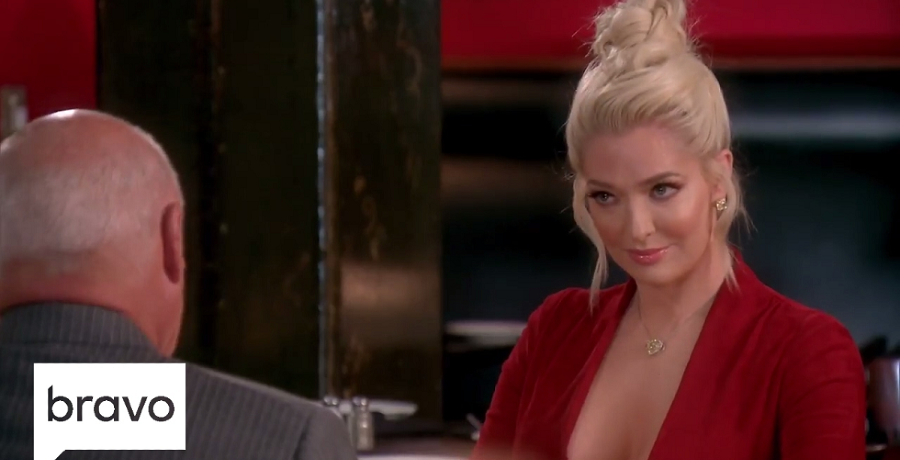 Erika Jayne addressed the “elephant in the room” on Wednesday night’s episode of The Real Housewives of Beverly Hills. She was aware that everyone wanted to know about her shocking divorce from Tom Girardi. On 2020 Election Day, Erika filed for divorce from the former attorney because she seriously thought it would’ve been swept under the rug. However, since she’s one of the biggest stars on the Bravo series, the breaking news had everyone talking.

Erika couldn’t escape it. So, she had to open up about it on Season 11 of RHOBH. She addressed what led to her divorce in the latest episode. She admitted that her life “drastically changed” once she signed the divorce papers. Erika also hinted that something big was coming Tom’s way.

Erika Jayne FINALLY opens up about her divorce

After three weeks of episodes that ended with “To be continued,” Erika Jayne finally opened up about her divorce. She could not escape this time around. The reality star made her grand appearance at Sutton Stracke’s Parisian-themed party. The 49-year-old sauntered into the door in a fuchsia-colored silk dress.

During the caviar and champagne lunch, Erika got right to the punch. “Ok, let’s discuss the elephant in the room,” she told her co-stars. Everyone awkwardly looked at each other. That’s when she revealed that she had to downsize her life since filing for divorce. Erika opened up more about her divorce in her confessional.

“I left because he pushed me further and further out,” Erika explained. “I just kept walking around that house knowing that this marriage was headed down a really s****y path.”

Erika couldn’t tell her RHOBH castmates before she filed because she didn’t want to make things awkward for them. In her confessional, Erika said she had to divorce Tom because she spent “a good 30 days closing out certain aspects of her life.” The often close-lipped television personality admitted that she “cried every day” over their subsequent split. Erika told the women that she couldn’t make their marriage work, and so she decided to file for divorce on Election Day to bury the story, which of course backfired on her.

Does the Pretty Mess author want to date again?

Later on in the episode, Crystal Minkoff invited the cast to her house to make dumplings. Garcelle Beauvais suggested to Erika Jayne that she should see a dating coach. However, the pop star couldn’t see herself dating someone else after decades of marriage. Even in her confessional, Erika revealed that she has no desire to date around.

Instead, she said in her confessional that she would rather have random, anonymous hookups that lead to nowhere. While Erika appreciates her friends being there for her, she foreshadowed her upcoming “challenges” and said that “there’s so much that these women don’t know.” Erika could’ve hinted toward her ongoing legal issues alongside her estranged husband. The Real Housewives of Beverly Hills airs Wednesdays at 8:00 p.m. ET on Bravo.