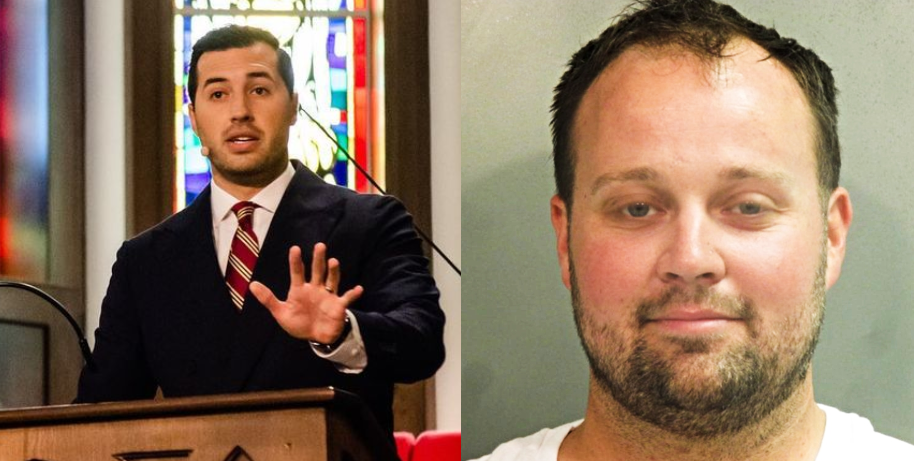 Jeremy Vuolo recently preached at a church in Laredo, Texas, which is where he and Jinger Duggar lived prior to moving to Los Angeles, California. During his sermon, he seemingly shared a message about his brother-in-law, Josh Duggar.

As fans of the family know, Josh was recently arrested for allegedly having child sexual abuse material on his devices. His trial is in July, but he’s hoping to have it moved to February 2022. Naturally, this alleged crime and all of the drama that’s gone along with it have been stressful for the family. A source recently revealed that it’s “destroying” the family and causing a divide between them.

Jinger and Jeremy previously shared a statement, speaking out against Josh’s alleged actions.

On social media, Jeremy’s sermon has been making its rounds. He shared the full video on his Instagram page. The video is about 50 minutes long though, so Katie Joy of Without a Crystal Ball shared a short clip of the sermon. She writes:

“There were multiple times it truly felt like he was speaking directly to Josh Duggar. But this part right here, I knew this was for Josh. He said if a husband doesn’t treat his wife right, continues to mistreat her, and refuses to confess he’s destined for hell. He spoke so much about repenting & confessing throughout the study, it felt way too coincidental. Then throw this in..”

In the comments section of Katie’s post, Counting On viewers are agreeing. One writes, “Oh he is 100% speaking to Josh right now. He’s more diplomatic that Derrick but i think with all this he’s finally waking up to what Josh did and the severity. He also now likely fully realizes that his wife is a victim. And that will make any half decent man angry.”

Others think this could be just a regular sermon about repenting. Nonetheless, those who follow the family hope that this message reaches Anna Duggar. They have been hoping that she will leave Josh if the accusations against him are true. Because of her family’s religious beliefs, it seems unlikely that she would get a divorce.

So, do you think Jeremy Vuolo’s sermon was directed at his brother-in-law Josh Duggar? Or do you think there’s another reason he shared this message? Let us know your thoughts in the comments below.

For more news about the Duggar family and Josh’s ongoing case, check back with TV Shows Ace. We will continue to share updates.