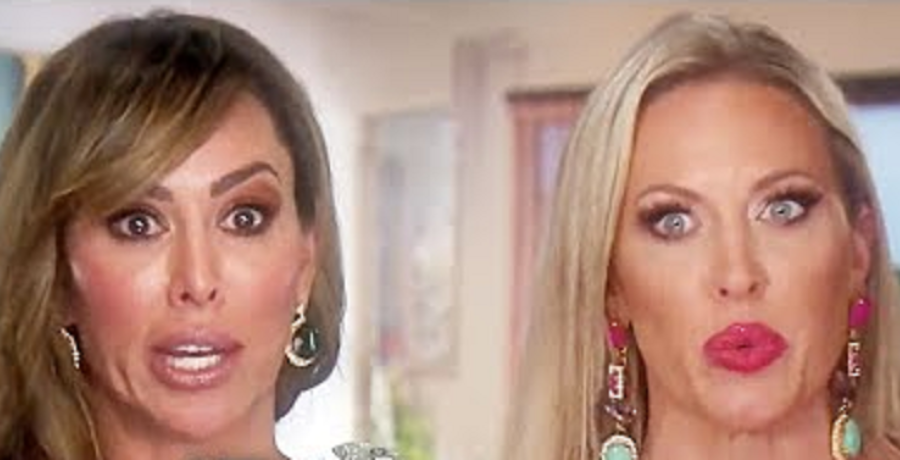 Once again, Kelly Dodd is not happy with Braunwyn Windham-Burke. She thinks her fellow co-star is to blame for her RHOC firing. On Wednesday, June 15, Bravo announced the new cast of The Real Housewives of Orange County Season 16. At the time, Kelly sent out a nice statement about enjoying her time on the Bravo series.

Since then, her tune has changed. Kelly has gone back to her conniving ways. She took to social media to expose Braunwyn. She released their text message exchange to blame her fellow former co-star for their firing. Not only is Kelly gone, but so is the mother of seven who opened up about her alcoholism.

Why Kelly Dodd is feuding with Braunwyn once again

Fans are aware that Kelly Dodd and Braunwy Windham-Burke do not get along. The two feuded for most of Season 15 of The Real Housewives of Orange County. Apparently, that feud is very much on and real because it’s still happening on social media. Kelly claims that Braunwyn is the reason for their firing. In a series of posts shared on Thursday, June 17, the 45-year-old exposed the 43-year-old by sharing their text message conversation.

“This was your fault,” Kelly wrote. “We’d still be on the show if you didn’t make things so dark and ugly and brought all that political ‘woke’ BS. Your lies about me, calling me a racist and a homophobe were horribly destructive and your phony storylines didn’t help either.”

Kelly sent the fiery text message after Braunwyn reached out to her and asked if she was doing okay. “I know we’ve been through hell and back but I’m here,” part of Braunwyn’s message reads. The RHOC alum responded to Kelly’s message with the following, “Well I’m still sober and still gay, like I said if you ever want to talk I’m here.” Regardless, Kelly didn’t like Braunwyn’s response and exposed her on social media.

In her Instagram, Kelly Dodd continued to share more theories about Braunwyn. She said that the activist had the “audacity” to send that message to her. Kelly claims that Braunwyn went on a podcast to claim that she was fired from RHOC because her cast didn’t feel comfortable with her sexuality.

Yesterday, Bravo announced their respective exits from the show. Bravo also decided not to renew Elizabeth Lyn Vargas’ contract. Heather Dubrow will make her grand return to the series. At the time, Kelly thanked Evolution Media and Bravo and that she will miss the cast and crew.

Bravo has not yet announced a release date for The Real Housewives of Orange County Season 16.