Kendra Caldwell Duggar’s mom, Christina Caldwell, shared a new photo on social media and it has fans freaking out. So, what did she post and why is it catching fans’ attention?

In a new Instagram post Tuesday, Christina and Paul introduced their baby girl to the world. They previously shared a story post about the new addition, but that was only visible for 24 hours. So, they decided to post this on their main feed to make it more permanent. In the professional photo, Paul and Christina cuddle their new daughter, Moriah Faith.

Fans are freaking out about how young Christina looks in the new photo. They cannot believe she’s 41 years old and just had her ninth child. Often, fans think she and two of her daughters, Lauren and Kendra, look like they could be sisters. 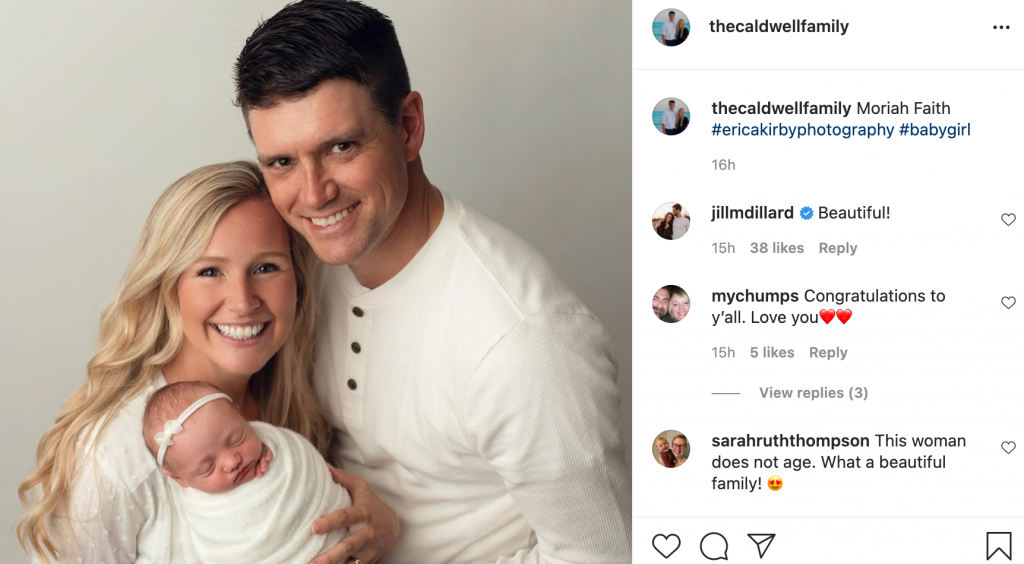 Over on Reddit, Duggar snarks pointed out how similar Kendra and Christina’s newborn photoshoots are. In a post, a user shares a snap from Christina’s newborn shoot with Moriah. Then, the user posted a photo from Kendra’s newborn shoot with Addison and Brooklyn. Not only do the babies look alike but so do the photoshoots. Both Kendra and her mom Christina tagged Erica Kirby photography in their posts, so it looks like they even had the same photographer for these newborn photos.

This is giving Counting On followers something else to talk about. One user asks, “Are you telling me these ARENT the same baby ??”

It looks like the babies are all wearing the same bows in the photos and might even be wrapped in the same swaddled. Not to mention, the babies are related and look a lot alike, many Reddit users think.

Corporate needs you to find the difference between these pictures. from DuggarsSnark

One Duggar snark adds, “Those Caldwell genes are STRONG!” Plenty of others agree with that user and think that the babies look a lot alike.

These three little girls will grow up together and may be great friends since they are very close in age. Addison is 18 months, Brooklyn is four months, and Moriah is one month.

So, what do you think of the new photos of Christina and Paul Caldwell with their new baby girl, Moriah Faith? Do you think Moriah looks just like Kendra Caldwell Duggar’s daughters Addison and Brooklyn? Let us know in the comments below.