It’s been a busy week for the Bates family with two new babies being born. Whitney and Zach Bates welcomed their son Jadon to the world last week. This week, Josie Bates and Kelton Balka’s second daughter, Hazel Sloane, was born. The Bringing Up Bates family is soaking up all kinds of special moments with the newborn babies.

Sadly, both Jadon and Hazel are having some health issues. Their parents have been sharing updates on social media so fans know how the babies are doing. Despite this being a difficult time for Whitney and Josie, as well as their husbands and the rest of the family, they have each other to rely on.

Why are the Bringing Up Bates babies in the NICU?

As we’ve reported, both Jadon and Hazel ended up going to the NICU. Jadon was released from the NICU on Wednesday, which is when Josie shared the news that Hazel was experiencing health issues.

Zach and Whitney’s son was in the NICU due to some O2 issues and a collapsed lung. Fortunately, he’s doing much better now and the family is eager to meet him. He certainly has lots of people waiting to get to know him.

Hazel is in the NICU because she has a rare blood condition. She also has jaundice. At this point, Josie and Kelton haven’t shared too many details about the new baby, but they are asking for prayers during this time. Hopefully, they will share another update soon so fans know how the baby is doing.

Because both Josie’s and Whitney’s babies were in the NICU, they were bound to cross paths at some point. As it turns out, when Whitney and Zach were leaving the NICU with Jadon Wednesday, they bumped into Kelton and Josie. Josie shared a snap on her Instagram stories, writing, “So thankful I got to hug @zachnwhitbates as she was leaving NICU to take precious baby Jadon home.” Hopefully, they can rely on each other for support during these difficult times. Though their babies have different conditions, they will both have NICU experience. 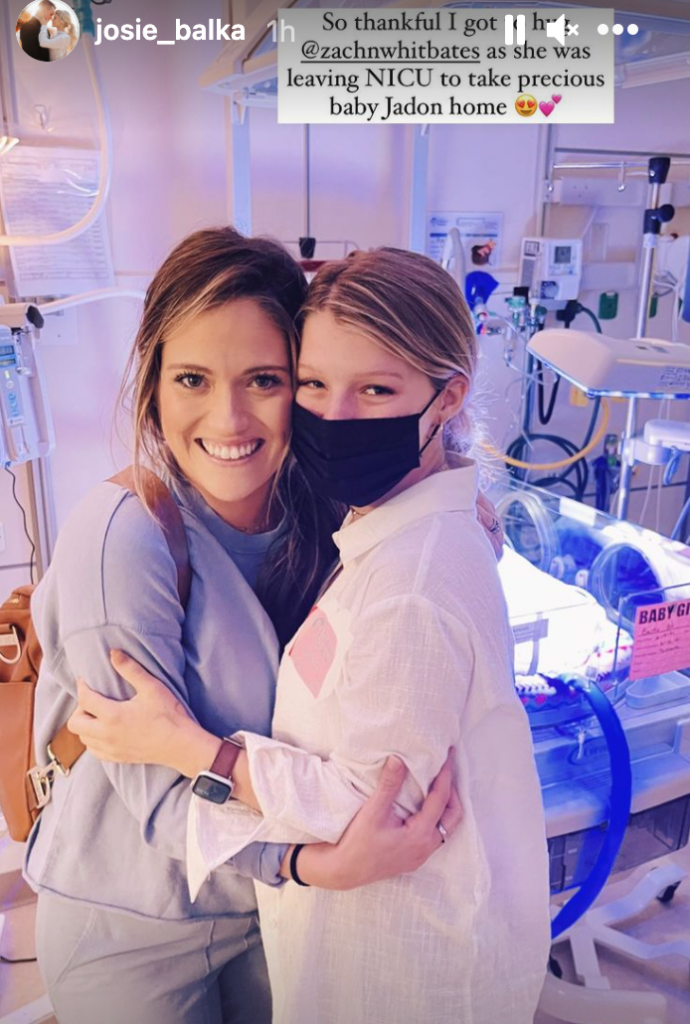 So, are you glad that Whitney and Josie Bates have each other to depend on during this difficult time? Do you hope to see more updates about the new little ones soon? Let us know your thoughts in the comments below.