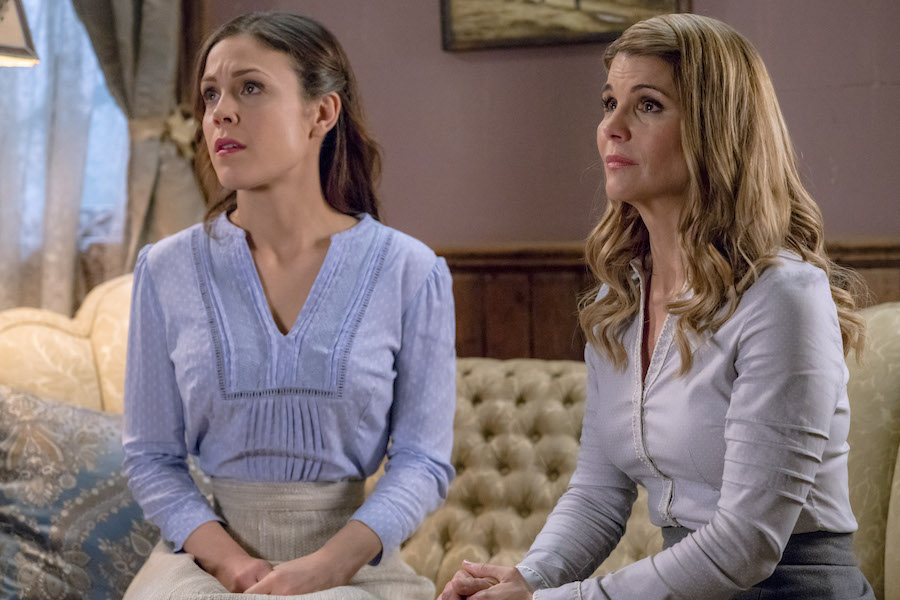 Ever since Lori Loughlin completed her jail time and probation When Calls The Heart fans have wondered if her character Abigail Stanton will return for Season 9. Moreover, her former co-stars, who are also her friends, have begun speaking up about this. In particular, Erin Krakow has been outspoken about Lori Loughlin’s return to WCTH.

Could Lori Loughlin return for WCTH Season 9? What does the cast of the Hallmark show say?

Here is the latest information for Hearties around the world.

Make no bones about it, Erin Krakow is pushing to bring Lori Loughlin back to When Calls The Heart. Before the Season 8 premiere, Erin Krakow spoke to ET Canada about the upcoming season of WCTH. One question was whether she would want Lori Loughlin and her character Abigail Stanton to return.

Krakow, who plays Elizabeth Thatcher Thornton, loved the question. She excitedly said, “It would make me so happy!” Moreover, the actress and WCTH producer stated that she would bring her dear friend “back with open arms.”

This was just one of many instances that Erin has stood up for Lori Loughlin, and expressed her wish for her friend’s return to the Hallmark series.

Back before his character Lucas Bouchard officially won the heart of Elizabeth, forever breaking the hearts of #Team Nathan, When Calls The Heart’s own Chris McNally was on the Deck The Hallmark podcast.

Besides discussing how he got into acting, and the anxiety he still faces when making an audition, he let fans on a very interesting prediction. He shared that he believed the WCTH Season 8 storyline was well set up for Lori Loughlin and her character Abigail Stanton to return!

As with Erin Krakow, Chris McNally has nothing but wonderful things to say about the Fuller House actress. He stated how nice she is. The cast loves Lori Loughlin.

Erin Krakow Opens Up About Lori Loughlin's Possible Return to 'When Calls the Heart' https://t.co/G83fcCH1uc

When Calls The Heart Season 8 Included Mentions Of Abigail Stanton

After a couple of seasons of silence on the character of Abigail, it did turn out that she was mentioned on several occasions in When Calls The Heart Season 8. The most meaningful was when Gowan talked about her to Ned. “When I sit at my desk and I look out my window across at the cafe and I see her name, I’ve got nothing but regret.”

The season ended with Gowan heading out. Will He bring Abigail Stanton back to Hope Valley? It seems that the show’s producers have always allowed this possibility. They wrote Abigail’s storyline and departure as something that was not permanent, as they did when Jack Lissing left the show. That door has stayed open, if only just a crack.

Moreover, Hearties, do you think that Lori Loughlin will return to the top Hallmark series?