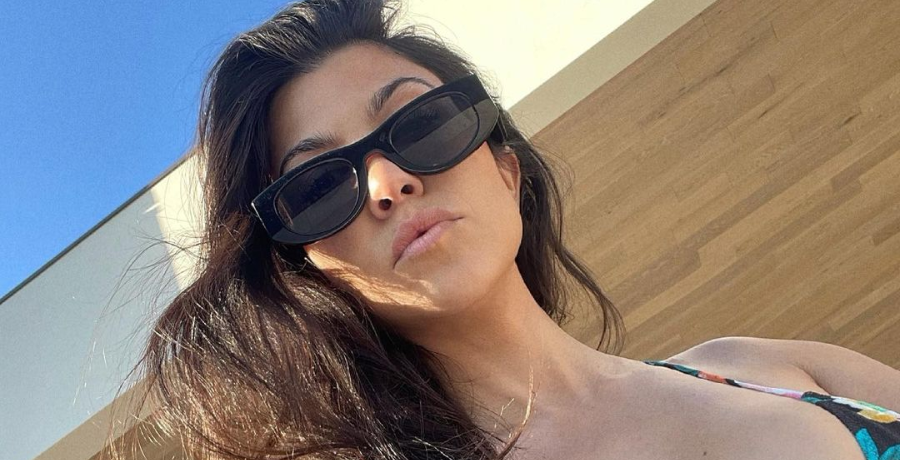 Kourtney Kardashian addresses a potential reunion with Scott Disick. The reality star tells all in a new episode of Keeping Up with the Kardashians. Fans still have a feeling that the two could end up together. Scott made it clear that he still has feelings for his baby mama even though he’s dating young model Amelia Hamlin.

As for Kourtney, she appears happy with Blink-182 drummer Travis Barker. Of course, their relationship hasn’t come without drama. Travis’s ex-wife, Shanna Moakler, accused the pair of heckling her with their happy union. Kourtney’s being heckled by her family, but for a different reason.

Her family wants her to go back to Scott Disick

In the sneak peek for the upcoming episode of Keeping Up with the Kardashians, Kourtney Kardashian listens as her family says that they want her to get back with Scott Disick. Throughout the entire fire season, her ex has been trying to win her back. Her sisters are on board with the idea. Even momager Kris Jenner made it clear that she would love to see Scott and Kourtney back together.

Kourtney hinted that there could be a chance that she would get back with her former boyfriend. However, that’s one big “IF.” He would have to go back to his good ways. The Poosh founder made it clear that she’s tired of his bad behavior. Scott hasn’t proved to her that he can stick to his word.

Kourtney is also not crazy about her sisters siding with Scott. She feels that they should be on her side. Kourtney doesn’t agree that Scott has changed over the years. She’s asked him to make promises since their split and he still hasn’t followed through. The mom of three wishes that her sisters would drop the conversation altogether.

Kourtney Kardashian sure looks much happier these days. On the family’s reality show, she made it clear that if Scott doesn’t change, she wants no part of him. Kourtney had enough of her family taking Scott’s side when it comes to a potential reunion. In the Thursday, June 10 finale, Kourtney revealed why she’s not ready to take him back.

“I just feel like I’m really over it with my family enabling Scott because they don’t know all of the details,” Kourtney says. “When Scott and I broke up, I set certain boundaries with him. Scott’s made so many major life improvements and he’s such a great dad, and I’m really proud of him. But the biggest thing is just having consistency. Him playing the role of the victim — I can’t have it keep going on and on.”

Eventually, Kourtney’s sisters agree to leave her alone. The scene took place in December 2020 during the family’s Christmas trip to Lake Tahoe. Around that time, Scott started dating Amelia Hamlin. Kourtney has since reunited with her longtime friend, Travis Barker, with who she appears head over heels.

The series finale of Keeping Up with the Kardashians airs Thursday, June 10 at 8:00 p.m. on E!.