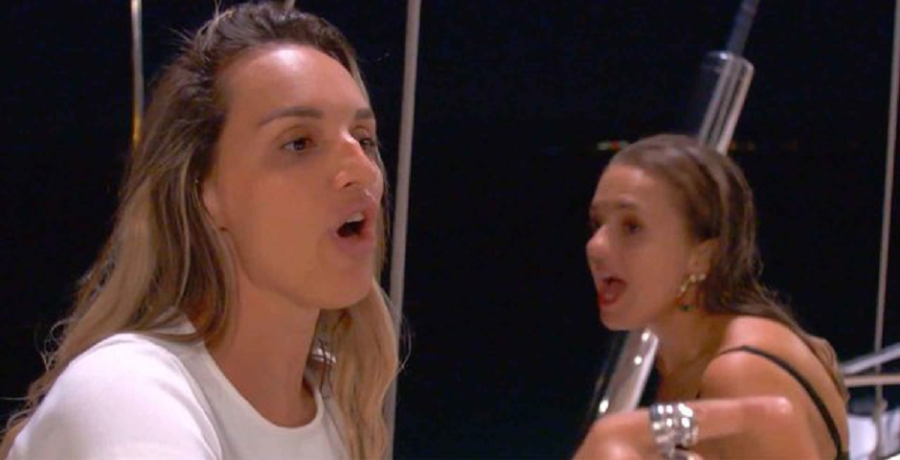 The drama on Below Deck Sailing Yacht continues. Last week’s preview shows stewardess Alli Dore blowing up at First Officer Gary King. As fans know, the two are part of a love triangle. Alli was not happy when she found out that Gary hooked up with deckhand Sydney Zaruba on the very first night. She assumed the two only kissed and that’s why Sydney has been after him ever since.

Gary has since apologized to Alli. He deeply regrets the choice that he made. Ever since Alli turned him down, he set his sights on Sydney once again. The two flirted in front of Alli out of spite. Sydney didn’t like seeing the two flirt all season, and Gary was brokenhearted.

In the next episode, Alli loses it on Gary.

Alli Dore is not happy with Gary King

Below Deck Sailing Yacht Season 2 star Alli Dore spoke to E! News. She teased that she has an explosive confrontation with Gary King. These days, the yachtie is happy with someone else. But on the show, it was a different story.

In an exclusive interview with E! News, Alli talked about her forthcoming confrontation with Gary King. The previous episode showed her yelling at Gary as he flirted with a topless Sydney in the hot tub. While Alli called things off with Gary out of respect for Sydney’s feelings, she realized he didn’t have any consideration for her own. Seeing the two about to hook up made her lose her mind.

“The episode where I snap is not my finest moment,” Alli told E! News. “And I feel really disappointed in that. It was just an emotional experience. From the very start, it was this push and pull, this game-playing, these mind games, and I guess I fell for it. I sort of believed that things were different to what they actually turned out to be.”

Alli recalled her feelings that very night. She admits she “felt a little foolish,” which led to the heated argument. The Australian said this episode was “definitely hard to watch” since those feelings came rushing back. Understandably, Alli wants to forget about that night.

Below Deck Sailing Yacht star has found a new love

Alli truly felt that she and Gary had a genuine connection. She told E! News that she “genuinely really liked” her Below Deck Sailing Yacht co-star. Alli had a feeling that Gary felt the same way about her. She made it clear that she said the word “breakup” in quotes.

However, Gary took it one step further. He assumed their boatmance was dead in the water and wanted attention from Sydney again. Despite her decision to end their relationship, Alli thought it was a “fair negotiation.” Learning about how hurt Gary was made her realize that he was really into her.

Regardless, Alli was “absolutely surprised” by Gary’s behavior that night. She didn’t get the type of respect she deserved. Nowadays, Alli moved on from this situation. She’s now dating Benny Thompson, in which she reveals she’s “never been loved like this.” Alli is considering moving in with him.