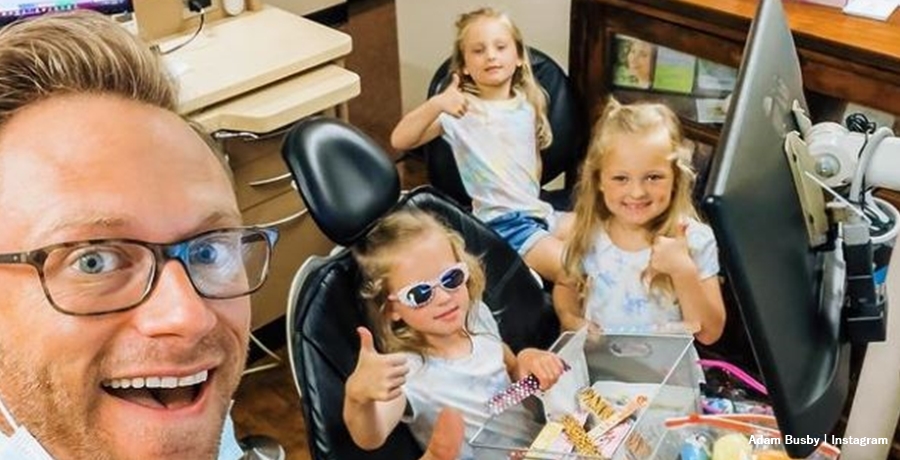 Ava Busby, one of the twins in the set of quints birthed by Danielle joins Parker, Lulu, and Hazel in keeping the fairy busy. OutDaughtered fans saw that she also had a wiggly tooth and her dad expects to see lots of visits from the tooth fairy Usually, kids start losing teeth between five and six, and the kids all seem to lose them at the same time. Well, except for Riley who seemingly trails her sisters in the milestone.

We reported in November last year, that the very first quint in the OutDaughtered family who lost a tooth was Olivia, aka Lulu. Lulu, Ava’s twin, was the second quint that arrived in the world. However, she beat out the first arrival, Ava, when she grew her baby teeth ahead of the other kids. At the time, we speculated, “as the quints all arrived on the same day, Riley, Ava, Hazel, and Parker [might] start getting those “wiggly” teeth in the near future as well.” Well, the kids never all experienced those “wiggly” teeth at the same time.

Ava Busby just lost a tooth as well, but Hazel already presented her tooth fairy with two opportunities. In early May this year, we reported that she safely stored a lost tooth away in a baggie and placed it under her pillow. However her dad, Adam said at the time, that she lost the previous tooth. She played around with it for ages and then forgot where she put it. So, at least in May, the fairy arrived bearing gifts. Next, fans heard that the OutDaughtered quint Parker Kate also got a wiggly tooth.

Keeping the fairy on her toes

On May 30, Adam shared a photo of Ava Busby looking at her mouth in the mirror. He said, “Seems like we have teeth coming out on the daily…” Actually, it certainly looks like the fairy should stay on her toes. After all, the little girls all drop baby teeth in a short space of time. Some fans asked if Riley lost a tooth yet, but it seems not. One fan noted, “The Tooth Fairy is going to have to take out a bank loan 🦷 🧚‍♀️ 😂.” Talking about costs, another TLC fan wrote, “That could get quite expensive. We just lost our first here at almost six years old.”

Meanwhile, the uncle to Ava Busby and the other quints, Dale Mills asked if Parker pulled her wiggly tooth out yet. Then another fan joked about the size of the tooth fairy’s wallet. They commented, “That tooth fairy will go broke quickly!!😂”

Remember to check back with us often for more news about Ava Busby, her big sister Blayke, Hazel, Riley, Parker, and Lulu.

Tyra Banks Teases Big News, Ditching ‘DWTS’?
‘RHOBH’ Family Members Get Their Own Netflix Series?
Todd Chrisley Says A Lot Of Christians Put Too Much Value On ‘Stuff’?
Saylor Waldrop From 13yrs To 16yrs In Minutes, See His New Look
Heidi Klum, Tim Gunn Back For ‘Making The Cut’ Season 3: All Details