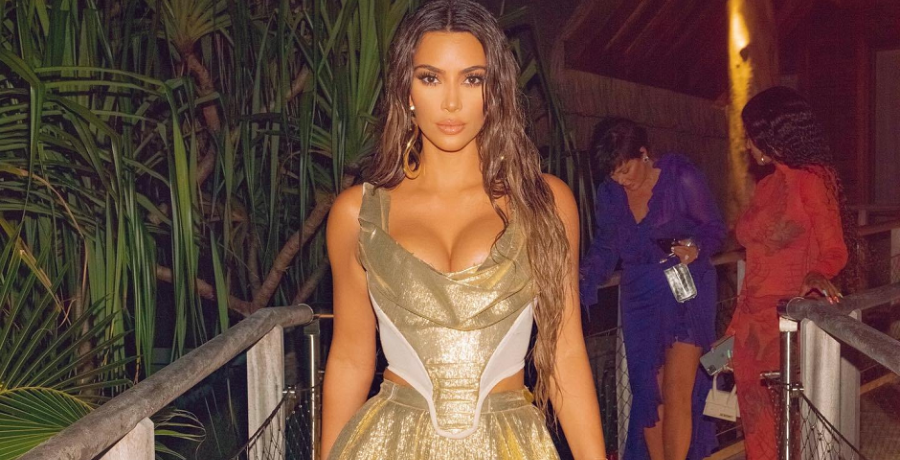 Kim Kardashian apparently tested positive for COVID-19 after her controversial 40th birthday trip. In October 2020, the Keeping Up with the Kardashians star and her family got backlash for traveling amid the coronavirus pandemic. She tested positive just 10 days after returning home from the trip. However, she did not reveal that to the public.

Instead, she kept that information to herself to use in an upcoming storyline for the final season of KUWTK. It’s also possible that Kim did not want any more backlash than she already received. The revelation came during a recent episode. The reality series implies that Saint West contracted the virus from a classmate at school.

On the latest episode of Keeping Up with the Kardashians, Kim Kardashian revealed that she contracted COVID-19. Buzzfeed did an investigation on the episode and found that she tested positive just 10 days after her island trip. The Kardashian-Jenner decided to keep Kim’s diagnosis quiet because they knew it would upset people. At the time, Kim announced to her fans and followers that she had a surprise celebration on an undisclosed tropical island.

Kim shared many photos from that trip. She even acknowledged her “privilege” and said that everyone quarantined two weeks before the trip. However, fans did not buy her story. They noticed family members like Kendall Jenner still traveled in the days leading up to the trip. The only two people who did not attend Kim’s controversial birthday trip were her ex-husband Kanye West and her little sister, Kylie Jenner.

In the latest episode of KUWTK, Kim claims she contracted the virus while studying for her baby bar exam. Still, it appears she got sick after her tropical island getaway, even if she followed the health and safety measures. On the Thursday, May 27 episode, viewers learned that Kim and her two oldest children — North, 7, and Saint, 5 — tested positive for the virus.

“So, my little Sainty just tested positive for COVID,” Kim said over the phone. “He’s doing ok, he doesn’t really have major symptoms, he just had a bit of a fever.”

According to the mom of four, Saint caught the virus from someone at school. This caused the virus to spread throughout their household. Kim and her kids were concerned about coming down with coronavirus. As a result, production shut down for two weeks.

Did she catch it after her controversial birthday trip?

Kim Kardashian denies the claims that she contracted the virus during her controversial birthday trip. Some fans think that the timeline doesn’t add up. After the episode aired, the official Twitter account to Buzzfeed News shared a post claiming that the reality star caught coronavirus while celebrating her 40th birthday with her friends and family on a private island.

In tonight’s episode of KUWTK, Kim Kardashian revealed that she had COVID-19 last fall.

Our reporter @elliewoodward dove into the timeline and worked out that it came soon after Kim’s infamous private island birthday bash. https://t.co/96hfr1cABv

False. Nobody caught Covid from the trip. Saint was the first to have it in our family and he caught it from school from another student who tested positive first. I then developed symptoms and got it a few days after he coughed on me while caring for him. https://t.co/hTWbB6JC25

Shortly after the report, Kim took to Twitter to deny Buzzfeed’s claims. She addressed the timing but failed to reveal the date as to when she tested positive for the virus. This comes after Kim failed her baby bar exam and was hit with a lawsuit from her former workers. It hasn’t been a good week for the reality star.

What do you think? Do you believe that Kim caught COVID-19 after her birthday trip? Sound off below in the comments.