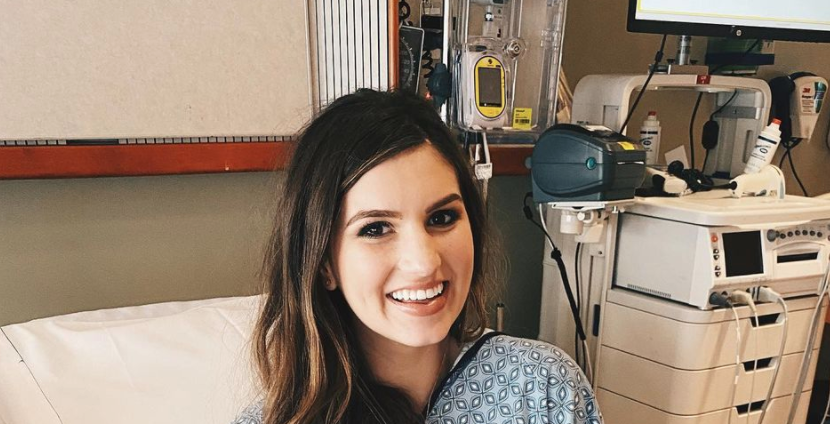 Bringing Up Bates star Carlin Bates Stewart just received a surprising diagnosis that she didn’t see coming. In Carlin and Evan Stewart’s latest vlog on YouTube, they head to Florida to visit John and Alyssa Webster, but they get some shocking news while they are there. So, what is going on with Carlin?

On their YouTube channel, Carlin and Evan share frequent updates about their little family, which also includes their adorable one-year-old daughter Layla. In their new video, which was posted on May 22, the pair gives fans a peek into their trip to Florida.

Now, we know that Nathan Bates and Esther Keyes got engaged while Evan and Carlin were in Florida. The elaborate three-day proposal required a little bit of help from Nathan’s sisters, so Carlin and Alyssa got to be a part of the special moment.

What is the Bringing Up Bates star diagnosed with?

While Evan and Carlin are visiting Alyssa and John, Alyssa’s chiropractor comes over. The chiropractor does in-home care. So, while she’s there, she checks out Carlin too. Evan says, “Carlin decided to pay for a one-time appointment, and she’s never been cracked manually…well, adjusted, not cracked.”

The chiropractor says, “Carlin, you have scoliosis.” This realization shocks Carlin, who asks, “I have what? That sounds dangerous.” The chiropractor then explains that spines should be straight up and down, but Carlin’s is crooked. Alyssa thinks that explains why Carlin’s back is always hurting. So, Carlin gets a full adjustment while at Alyssa’s home.

The Stewarts don’t mention the diagnosis again throughout the video, so it’s unclear if they are going to do anything about it. Maybe Carlin will start seeing a chiropractor back home or head to the doctor for a checkup soon.

In the comments section of her post, a few fans are confused by Carlin being diagnosed with scoliosis as an adult rather than a teenager. They are surprised that she didn’t know about this diagnosis for so long. But they just hope she’s okay and that she gets the care she needs.

So, are you surprised to hear about Carlin Bates Stewart’s new diagnosis? Are you shocked she didn’t know sooner? Let us know in the comments below.

Don’t miss new episodes of Bringing Up Bates Thursdays on UPtv. For the latest news on the Bates family, check back with TV Shows Ace.