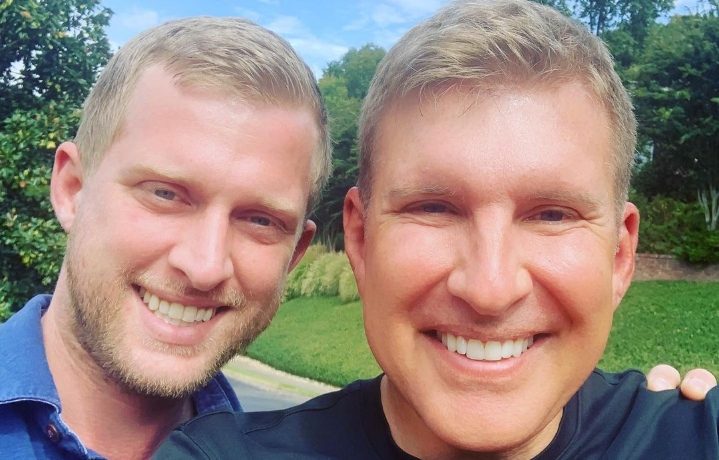 While Chrisley Knows Best fans anxiously await the return of their favorite show to USA Network, there’s still a lot to keep up with from their favorite reality television family. Weekly, Todd and Julie Chrisley record a podcast, Chrisley Confessions to keep fans up-to-date with the happenings in their family. Not only that, but many members of the Chrisley family are active on social media. While former estranged Kyle Chrisley may not be as active as his other siblings on social media, fans get sporadic looks into his life. Keep reading to find out why his dad, Todd Chrisley proclaims that Kyle and his wife, Ashley are “going to hell,” for something they did to Nanny Faye.

In a recent Instagram video, followers see Kyle Chrisley and his wife, Ashley seated on a love seat. Next to them, Nanny Faye has her feet up in a recliner. While Kyle and Ashley are laughing, there is a small Yorkshire Terrier walking around in front of the camera. At the moment, it is hard to tell what’s going on. However, Nanny Faye doesn’t seem entertained by it. She even says, “Don’t start no shit.” Ashley tries to explain that Kyle is trying to give her the blanket back. Nanny just seems to want the fan on. So maybe someone had gas?

Next, Nanny Faye is hollering for Kyle to go outside. He can’t contain his laughter. For some reason, he repeatedly tries to hand Nanny a blanket that looks like there’s something in it. Entertainingly, Nanny is convinced that it’s sh*t.

Kyle repeatedly tries to give Nanny Faye the blanket. At one point, he falls over laughing. At this time, viewers learn that Todd Chrisley is the camera man. Todd seeks clarification from his mother asking “You don’t want what on you?”

What is in the blanket?

Ashleigh is dying laughing at this point and asks Nanny why she doesn’t want the blanket. Nanny is still convinced that there is something in the blanket.

Finally, Kyle falls on the floor and Nanny Faye sees something she doesn’t like. She springs up from her recliner and starts talking about how her back hurts. Kyle holds up a small furry animal. From the camera angle, it is hard to tell what it is. However, it’s assumable from the caption that it’s a rat of some sort (real or otherwise). The caption also insinuates that Kyle and Ashleigh are “going to hell.”

Do you think this was a good prank to play on Nanny Chrisley? Let us know your thoughts in the comment section below. Come back to TV Shows Ace for more Chrisley Knows Best news.

How Does Jana Duggar Make All Her Money? 2022 Net Worth Revealed
Is Buzzy Cohen In The Running For ‘Jeopardy!’ Host?
‘Sister Wives’ Fans Demand Answers From TLC
‘Hope Valley Days: A Hearties Reunion’ Will Allow Fans To Meet Cast
Meri Brown’s Child Identifies As Genderqueer: What Does It Mean?