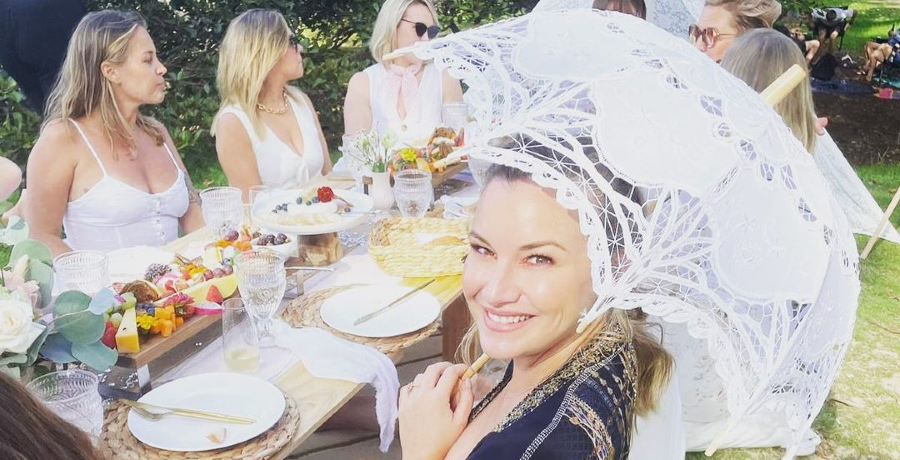 Below Deck Med alum Hannah Ferrier gave off major Housewives vibes. Her glamorous photo combined with the caption felt like a Real Housewives tagline. She radiated when she had lunch with her friends. She left Below Deck Mediterranean after Season 5.

Captain Sandy Yawn fired Hannah in the middle of the season. Bosun Malia White sent her a photo of Hannah’s belongings, which included a prescription for Valium and a CBD pen. Hannah was rather unfazed during her firing, and fans were fed up with Captain Sandy. Since leaving the yachting industry behind, Hannah has never looked better.

Some would say that motherhood looks good on her.

On Friday, May 21, Hannah Ferrier posted a new photo on Instagram. She smiled brightly during lunch with her friends. The former Chief Stewardess sat outside on the dock at a restaurant. Hannah wore a black floral print dress with a black leather motorcycle jacket draped over her shoulders. She accessorized the look with a necklace that featured a diamond charm.

She wore her signature blonde hair in loose waves. Hannah was feeling herself and it showed. She posed with her hand in her hair, showing how much she loves her new look.

“Being a mum is my first love but lunch out with the girls will always be my mistress,” Hannah wrote in the caption.

It doesn’t sound like Hannah is in a rush to return to reality television anytime soon. She makes money with her online yachting course. Also, Hannah hosts her own podcast, which is called Dear Diary, You’re Effed! However, that hasn’t stopped some fans from wondering if she should be a Real Housewife.

Some noted that the Instagram photo and caption gave off major Real Housewives vibes. Hannah Ferrier has never revealed whether she would be a Housewife. But she did reveal which Housewives she would love to serve aboard her yacht.

“I think probably [The Real Housewives of] Atlanta,” Hannah said on the Watch What Happens Live with Andy Cohen After Show. “I reckon they’d be a fun group to watch party.”

The former yachtie professed her love for RHOA and RHONJ on social media in the past. For now, she’s happy with being a new mom while building her empire. Hannah continues to share photos with her seven-month-old daughter Ava. She wouldn’t trade her sleepless nights and messes for another charter season.

Check back with TV Shows Ace for more news on Hannah Ferrier.