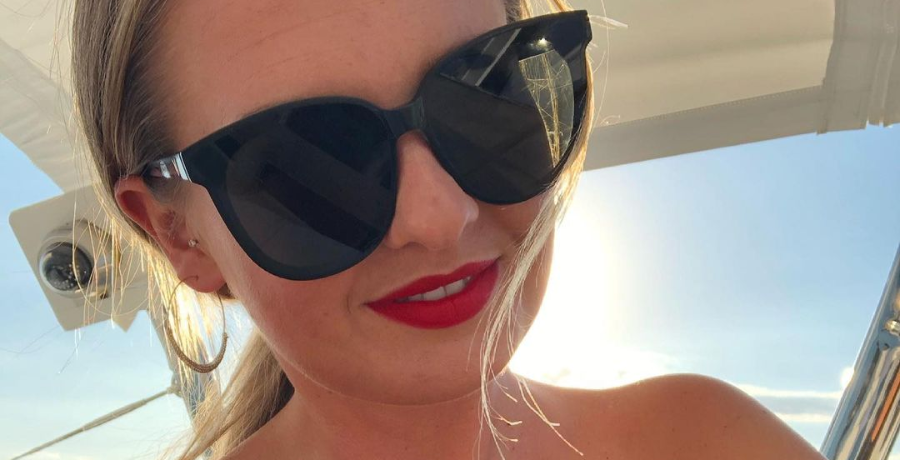 Below Deck Sailing Yacht newbie Daisy Kelliher is spilling the tea. The Chief Stewardess is opening up about crew drama and difficult charter guests. Fans are currently seeing her feud with First Officer Gary King play out on the show. It’s clear that the two leads don’t get along.

She’s also dodging Chef Natasha De Bourg’s mean comments in the meantime. In the fiery midseason trailer, Daisy loses it and says she’s tired of everyone seeing her as the “b**ch” on board. In an interview with ET Online, she addressed the backstabbing comments. If you don’t like her, say it to her face.

The Below Deck Sailing Yacht Season 2 star revealed the lessons she’s learned. Daisy is seeing her interactions with both Gary and Natasha on the show. Now, she knows how they really feel about her in their confessional interviews and conversations with the other crew members.

“Natasha made it very obvious that she had a problem with me, which I appreciated more,” Daisy told ET Online.”Whereas with Gary, it was a bit like, ‘Why didn’t you say that to my face?’ We could have been a really strong team.”

Gary’s comments surprised Daisy more. She feels like he should’ve confronted her about it. The drama will continue in the second half of Season 2. In the midseason trailer, Gary reveals the one thing he would change about the charter season is Daisy. She snaps back and says, “I’m sick of being made out to be the f***ing b**ch of the group.”

Daisy teases that she and Gary never resolve their feud. As for her and Natasha, they are in a better place. The chef even apologized for her behavior on a previous episode of Watch What Happens Live with Andy Cohen. Daisy has a feeling that Gary is “scared” of her and he “likes to be liked.”

Why the crew clashes so much

The Below Deck Sailing Yacht star also addressed her fights with the crew and some of the criticism she received. The crew members feel that Daisy acts better than them since she has superiority over them. In an interview with E! Online, she feels that the clashes stem from their varying personalities.

“I think sometimes with me people misinterpret me taking my job seriously and delegating and wanting it done properly,” Daisy explained. “They misinterpret that for maybe me being b**chy or maybe being too assertive. But that’s definitely not it. And I think with Gary and Natasha, I think that’s the way they interpreted my management style.”

Rather, Daisy wanted everything done right. She felt that most of them were slacking with their responsibilities. Part of her duty is to communicate the positives and negatives of the guest’s experience during the charter. However, some of her crew members didn’t appreciate the constructive feedback.

Below Deck Sailing Yacht to have its most “challenging” guests yet

This season of Below Deck Sailing Yacht already had its share of high-maintenance guests. According to Daisy, the worst is yet to come. She told E! Online that more guests will make things difficult for the Parsifal III. Some fans have a feeling it’s the group of guests who worked as former yachties.

“There’s definitely one more group that, you know, for me, really stuck out,” she said. “I thought they were all actually fine. I really enjoyed all of them but, there were two that were definitely a bit more difficult and a bit more challenging.”

Daisy refused to name names. Instead, she said that they will “stick out” the moment they arrive. Fans will have to keep watching to see what he means. Below Deck Sailing Yacht airs Mondays at 9 p.m. ET on Bravo.