Since word of Josh Duggar’s arrest went public, some fans and critics have been calling for the cancellation of Counting On. At this point, it’s unclear whether the show will return to TLC for another season. But fans have been waiting for a response from the network for months. Derick Dillard is now showing his support for the cancellation of Counting On.

As we previously reported, it’s possible that TLC knew about Josh’s arrest before it happened. This could explain why the show hasn’t been renewed yet. Now, a petition is going around, urging TLC to remove all traces of the Duggar family from the network. In a statement following Josh’s arrest, the network reminded everyone that Josh hasn’t been on the show and that 19 Kids & Counting was previously canceled over a previous scandal in 2015. Though he isn’t on the show, Anna and the kids are sometimes a part of it. Plus, the rest of the Duggar family is still on TLC.

While most of the people calling for the show’s cancelation are fans and critics of the family, one family member wants the show off the air.

On Twitter, Derick has been checking out tweets about Counting On, TLC, and the Duggar family. He has even “liked” several tweets from people who think the show should be canceled. You can see Derick’s “liked” tweets here.

These are some of the tweets that Derick has liked since Josh’s arrest:

Also on Twitter, Derick engaged with someone who said that the Dillards’ YouTube channel should be canceled because Josh is their family member. Derick argued back and forth with the user for a little while, as can be seen below. 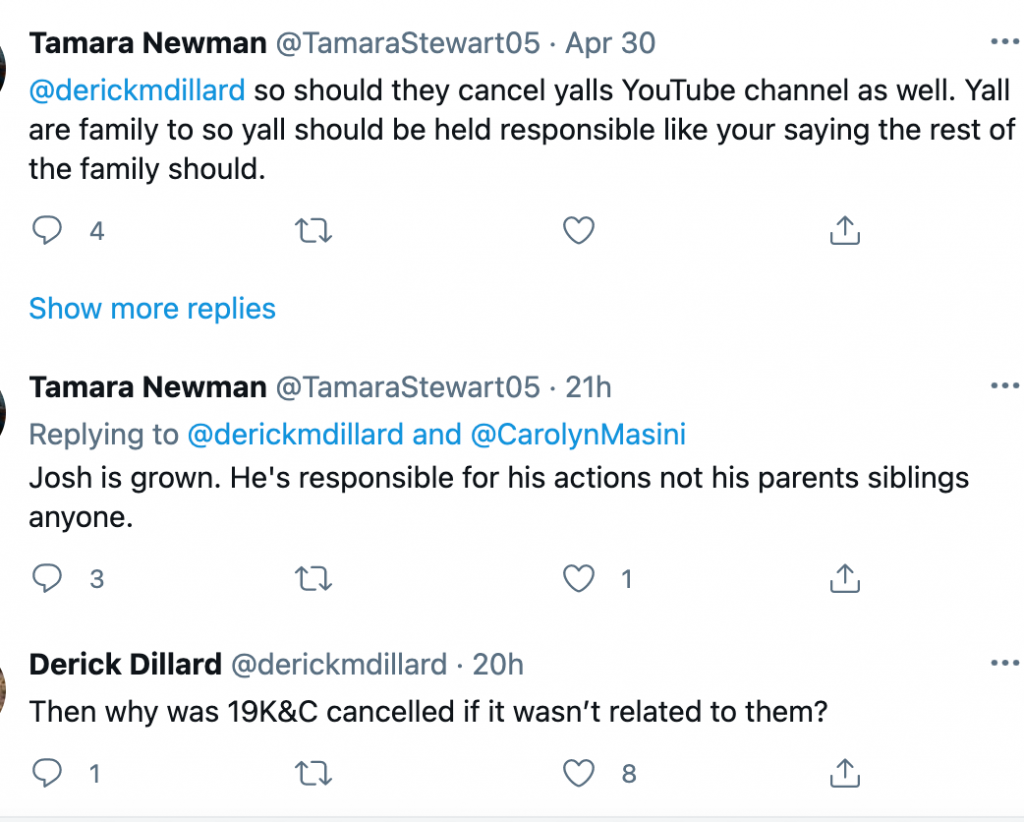 While Derick didn’t confirm that he wants the show canceled, it seems like he’s in support of it based on the tweets he “liked.”

So, do you think TLC will cancel Counting On like Derick Dillard hopes they will? Let us know in the comments below.

For more updates on the status of Josh Duggar’s case, as well as the fate of Counting On, check back with TV Shows Ace.