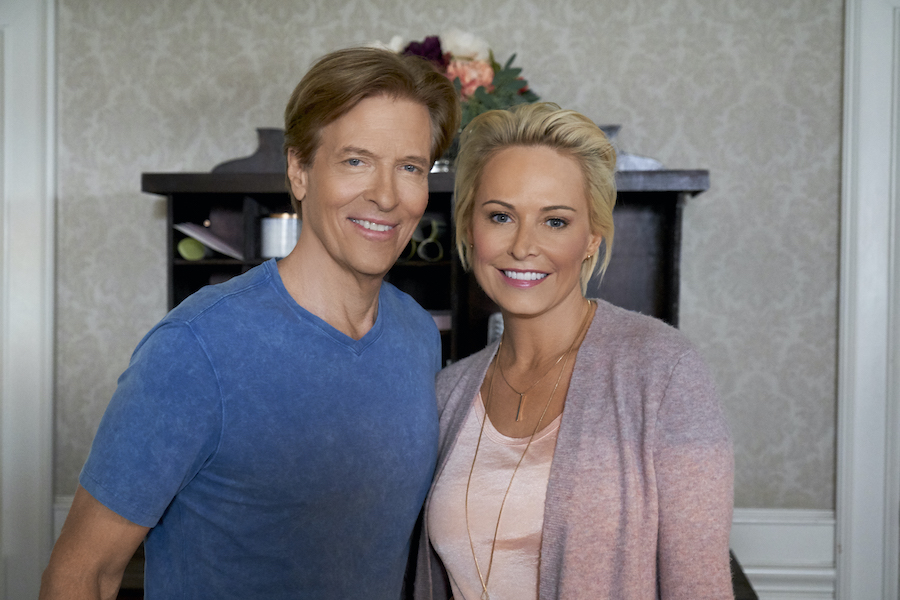 The Wedding March fans who have been waiting for that Mick and Olivia happily ever after story on Hallmark may finally get their wish. This is the fan-favorite series that stars Jack Wagner (When Calls The Heart, General Hospital), with his former Melrose Place co-star, Josie Bissett (Christmas With Tucker, Deadly Vows).

What do we know about the sixth installment of The Wedding March franchise?

Here are all the details.

Are Hallmark fans ready for another installment of The Wedding March? On Thursday, Jack Wagner went to Instagram to let fans know that he was headed to British Columbia to quarantine and to film the sixth movie.

The WCTH star awkwardly wore a mask and jokingly talked about the film rolling. After flashing one of his million-dollar smiles, Jack asked, “How’s everybody doing?” He then went on to explain how he was at the airport, headed to Vancouver. First, he has a 14-day quarantine, which is required by the Canadian government.

Next, they start filming The Wedding March 6. He seemed surprised to say that this was the sixth of the franchise, and added: “beyond grateful.”

Before he ended the video, Jack Wagner promised fans some BTS footage from the upcoming movie. He even hinted he may share some hotel quarantine movies as well. He does need to keep himself busy!

What Is Hallmark’s The Wedding March About?

Each episode includes some Hallmark heavyweights. For example, in the last movie, The Wedding March 5: My Boyfriend’s Back, Tyler Hynes (It Was Always You, On The 12th Date Of Christmas) and Cindy Busby (Unleashing Mr. Darcy, Chasing Waterfalls) starred, alongside Jack Wagner and Josie Bissett. That was in 2019.

However, it is now two years later. Will Mick and Olivia finally have a wedding of their own? Moreover, when will it air? We can only guess that they will start filming around May 6. That means the movie will be done by Memorial Day. Perhaps The Wedding March 6 will air in June, for June Weddings? We will have to wait and see!

Get ready to fall in love again with Jack Wagner's Mick and Josie Bisset's Olivia in a brand new #WeddingMarch sequel.

Read details and watch a video with Wagner's announcement in the link: https://t.co/htXnhUFQSz #HallmarkChannel

Where Do They Film The Wedding March?

As we know from Jack Wagner’s Instagram post, they do film Hallmark’s The Wedding March in the Vancouver area. To be specific, the series filming location is on the Harrison River at the Rowena’s Inn on the River in Vancouver, British Columbia.

Meanwhile, be sure to catch Jack Wagner on the remaining episodes of When Calls The Heart Season 8. The season is winding down and a lot is happening. What could be next for Jack’s character, Bill Avery, now that he has retired his Mountie outfit?

Watch WCTH on Sunday evenings at 9 p.m. Eastern, on the Hallmark Channel.