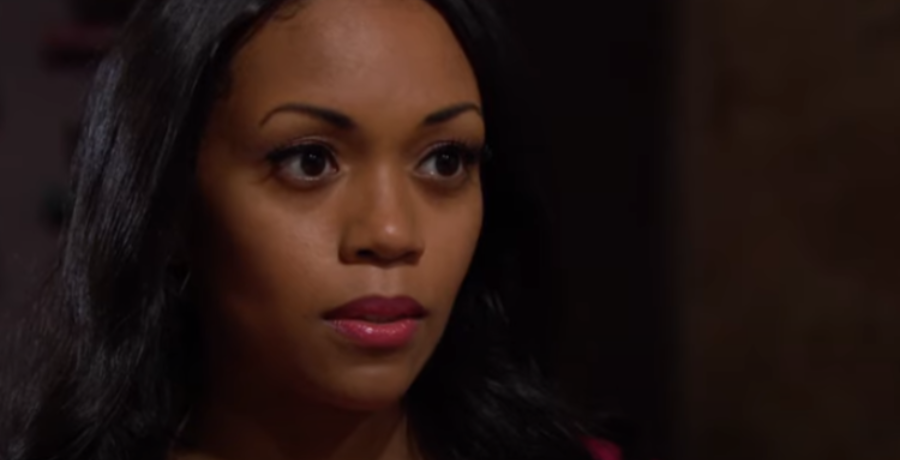 Earlier this month, Mishael Morgan was out and Karla Mosley was in. The Young and the Restless comings and goings revealed that Mosley was recast as Amanda Sinclair. Fans who watch the CBS daytime soap bet known Mosley for her role on The Bold and the Beautiful. She played the role of Maya Avant, the character who made history by coming out as transgender on daytime television.

However, Mosley won’t make her debut until Saturday, April 24. Fans were upset to learn that Morgan won’t be part of the show. However, there is some good news. They will have to wait a little bit longer to see her big return.

When will she return to Y&R?

On Thursday, April 22, Mishael Morgan took to Instagram to share a new photo. She was all dolled up as her character Amanda Sinclair. Her dark hair was worn in soft waves with a middle part. She paired her look with red lipstick, black mascara, and a black zip-up blouse.

The beauty announced her return to The Young and the Restless. Morgan had to take a break from the show to deal with an eye injury. Now, she’s back on set filming as Amanda Sinclair. It doesn’t look like she’ll be gone for good, after all. Today was her first day back on the set and it obviously made her happy. “First day back and It’s like riding a bike!” she exclaimed in the caption.

Over 3,000 fans and followers liked Morgan’s post. Y&R fans took to the post to react to the news of her return. “Welcome Back…it is never the same with you,” one user wrote before adding, “you look gorgeous by the way.” Another fan added, “So happy you and Devon are back together big-time fan.”

Fans have yet to see Mosley’s scenes. She will make her debut on the longtime soap in the next few days. Before they know it, Morgan will be back in her spot. Fans can’t wait to see both actresses’ portrayal of Amanda.

Mishael Morgan was becoming front and center on the show. Amanda’s story with Devon Hamilton (Bryton James) was just heating up. Unfortunately, Morgan had to undergo eye surgery shortly after an injury and needed to take time off to recover. Now, it looks like Morgan is recovering well.

In an interview with Soap Opera Digest, Mosley revealed that she was up for the challenge. When she got the casting news, she immediately spoke with Morgan to learn more about the character. Morgan and Mosley knew of each other since they were on the same CBS lot, but they never talked until recently. Mosley admits that she feels nervous about stepping into such a big role on the show.

Are you excited to hear about Morgan’s return? Are you looking forward to Mosley’s portrayal of Amanda Sinclair? Sound off below in the comments.

The Young and the Restless airs weekdays on CBS. Check your local listings for details.