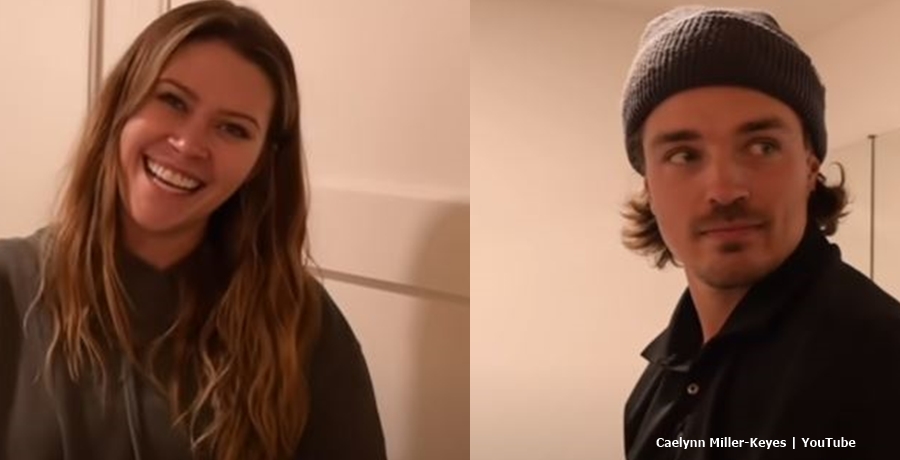 Dean Unglert & Caelynn Miller-Keyes seem to commute between Las Vegas and LA  at the moment. Perhaps they still move their stuff into their new home. Taking to his Instagram Stories on April 22, Dean revealed that the Bachelor in Paradise stars drove there. However, it looks like they only spent one night there before they returned to LA. Their pup, Pappy went along for the trip.

It’s not clear whether the two Bachelor in Paradise lovebirds actually completely moved into their new home in Las Vegas. We reported back in December, that they moved out of Caelynn’s apartment and into a home where they could allow Pappy more space. Actually, they lugged along a lot of potted plants, and Caelynn made the home look tropical with them. So, when news came shortly after that they bought a house in Las Vegas, ABC fans became confused. Some of them wondered if that house was the Vegas home.

In February, a home featured in a video that Caelynn popped up on her YouTube. Dean Unglert & Caelynn still worked on fixing up the place. So clearly, they didn’t live in it full time yet. Actually, Dean worked on a “bidet gone wrong.” People Magazine reported in January that they were “building a house in Summerlin and will move into their new home in April.” So, that ends the confusion. They moved out of an apartment and into a house in LA. Then, they planned another move to Las Vegas.

Dean Unglert & Caelynn set off from LA to Las Vegas on Wednesday, April 22. Clearly bored, Dean took to his Instagram Stories and shared photos of himself with Pappy the dog in the passenger seat. He said that Pappy helped him “pass the time” as Caelynn drove.  Actually, he used up the time doing a Q&A. One fan asked him why they chose Vegas. Well, he listed quite a lot of reasons, including the fact that it’s closer to Caelynn’s family.

Dean Unglert & Caelynn like the idea of Vegas as they like an outdoor lifestyle. Plus, they get to watch “one Bronco’s game per season.” Additionally, it gives them some permanency. At least for now. However, in his photos which you can see below, it looks like they haven’t fully moved in yet. Maybe they took some stuff up there. In the next Q&A slide, Dean revealed that they sat outside relaxing. Maybe they just stayed overnight and then left for LA again. The Bachelor in Paradise star said, “success, and now back to la.”

Perhaps as they move slowly, it takes a lot of travel and a foot in each city for BiP stars Dean Unglert & Calynn for the time being.