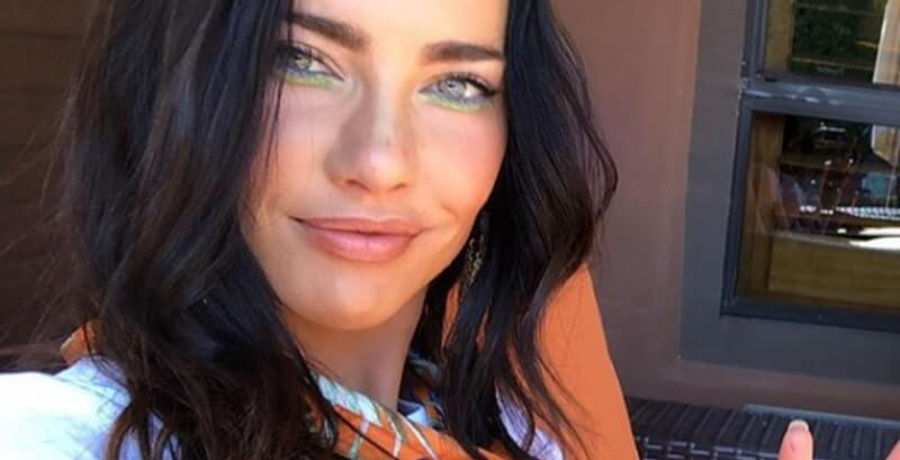 The Bold and the Beautiful star Jacqueline Wood is bikini-ready. Now, just two months after giving birth, she decided to soak up some much-needed Vitamin D. On Instagram, she revealed that she spent her birthday enjoying the surf and sand. As TV Shows Ace previously reported, Jacqueline gave birth to her second son in February.

Over the weekend, she traveled to Miami for her birthday. The soap star slipped into a very sexy black bikini that barely covered her assets. Jacqueline appeared to be having a good time in the sand. She’s currently on maternity leave from B&B and is taking a break from filming right now.

Jacqueline Wood busts out of bikini

On Saturday, April 17, the Bold and the Beautiful actress shared a slideshow of photos via Instagram. The first shows the brunette beauty sitting in the sand in a black barely-there bikini. She looks up and smiles as she scoops up some sand.

In the next photo, she posed with a beach tote that featured a print similar to Versace. The Emmy-award-winning actress paired her sizzling look with gold jewelry and a straw hat. Then, in the final photo, she gave the camera a sexy look as she showed off her incredible body just two months after giving birth to Lenix.

“A little vitamin D for meeee #essential,” Jacqueline wrote in the caption.

Vitamin D sure looks good on her. Her fellow Bold and the Beautiful castmates jumped to the comments section to share their thoughts. Katherine Kelly Lange, who plays Brooke, wrote: “Wowza!! Happy birthday, beauty!!” Jennifer Gareis (who plays Donna) asked: “How do you have a baby & look like that right after???”

Many of Jacqueline’s fans and followers agreed that she looked great. One even called her “eighth wonder of the world,” which is some praise. The model has to stay in great shape for her job. Speaking of modeling, it looks like she was posing for photoshoots while she was down there.

‘The Bold and the Beautiful’ star is seeking truth

On Monday, April 19, Jacqueline shared a photo of herself wearing just a blanket and red lipstick. The Bold and the Beautiful star wanted to cozy up with a good read after frolicking in the sun. She wrote in the caption: “Truth-seeking.. per uzh.” However, it’s unclear what she was reading.

The 34-year-old posted a photo of her newborn back in February. At the time, she only shared a photo of her son’s hand. Jacqueline did not reveal any details about her new bundle of joy. In October 2020, she announced her pregnancy in the most unique way ever. She revealed her baby bump as she rocked a pair of thigh-high silver boots.

Fans can’t wait for Steffy to make her big return. They want to know what’s next for her and her fiance Finn. Check back with TV Shows Ace for the latest soap news. The Bold and the Beautiful airs weekdays. Check your local listings.

Whoopi Goldberg Opens Up About Old Broad ‘Secretions’
Kylie Jenner Stresses Fans Out Because Of This
Todd Chrisley Being Sued By Livid Tax Investigator?
Kelley Flanagan & Peter Weber Are Confirmed Back Together
‘Sister Wives’ Meri Brown Left Alone & Crying, No Family In Sight