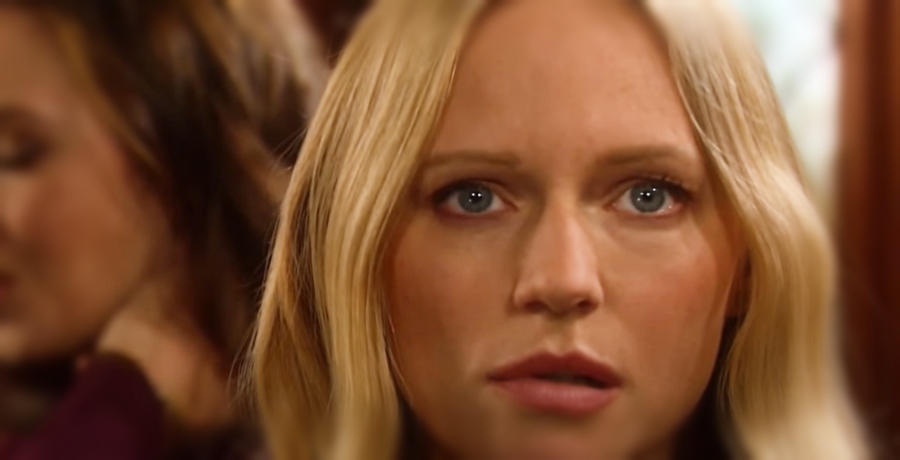 Plus, Charlie Dale’s (Mike Manning) murderer is revealed this week on the NBC soap.

Days of Our Lives spoilers show Rafe Hernandez has switched his attention to Belle Black as his prime suspect in Charlie Dale’s murder. Jan Spears (Heather Lindell) noticed “perfect” Belle had a button missing from her coat. Coincidentally, that matches a button in Rafe’s evidence bag. Now Belle faces the tough questions as Rafe interrogates her.

Days of Our Lives spoilers know there’s been a revolving door of suspects so far. However, this latest piece of evidence might be the key to solving the WhoDunnIt mystery that’s been dragging on for months. DOOL spoilers reveal the case is officially closed Monday, April 19, when the killer is finally revealed.

Days of Our Lives spoilers know Abigail Deveraux has had a heck of a year. Her newfound half-sister Gwen Rizczech (Emily O’Brien), vowed to destroy her life. Now almost a year later, the sinister sister archives her goal. Sadly it comes just when Gwen realizes how much she enjoys being Jack Deveraux’s (Matthew Ashford) daughter and part of his family.

Gwen slept with her sister’s husband, Chad DiMera (Billy Flynn), while he was drunk on New Year’s Eve, remind Days of Our Lives spoilers. Now she’s pregnant with his baby. Selfishly, Abby wants her sister to terminate the pregnancy, so she doesn’t have a constant reminder of her hubby and sister’s one-night stand. However, DOOL spoilers say Gwen decides to keep the baby. This sets Abigail over the edge. Thankfully her aunt, Dr. Kayla Brady (Mary Beth Evans), is there for her breakdown.

Abigail Deveraux’s portrayer, Marci Miller recently gave birth to her first child. This is likely the route the writers are taking to write her off since her real-life pregnancy was not a part of her Days of Our Lives storyline. It appears Abby will be sent away for inpatient therapy to deal with her most recent mental health crises.

Today on @nbcdays, Sami warns Lucas they have a problem. #Days #Lumi pic.twitter.com/aribrRWJv7

Days of Our Lives Spoilers: Lucas Horton Is Ordered To Woo Chloe Lane

Kristen DiMera (Stacy Haiduk) recruited a new pawn in her scheme to keep Chloe Lane (Nadia Bjorlin) away from her boyfriend, Brady Black (Eric Martsolf), on Days of Our Lives. While disguised as “Susan Banks,” Kristen catches Lucas Horton doing the walk of shame from Sami’s bedroom. She then reveals herself as Kristen to Sami. Kristen demands Sami help her she or she’ll tell her brother (and Sami’s husband) EJ DiMera (soon to be portrayed by Daniel Feuerriegel) about her tryst with Lucas.

Days of Our Lives spoilers say Sami shares her new plan with Lucas. Of course, Sami thinks it’s sheer brilliance. Plus, there’s not much Lucas won’t do for Sami. Now Sami tells Lucas in order to comply with Kristen’s blackmailing; she needs him to work his charms on Chloe Lane. DOOL fans know Chloe is also one of Lucas’s ex-wives. Plus, not too long ago, they did attempt to be a couple,

So Lucas attempts to woo Chloe per Sami’s demand. However, DOOL spoilers tease Chloe isn’t buying Lucas’s new interest in her. She knows he’s up to something. Of course, this won’t sit well with either Sami Brady or Kristen DiMera.

‘Unexpected’ Hypocrite Jason Korpi Makes Fans Want To Kick His A**
Carlin Bates Returns To ER For Third Time In A Week After Health Scares
Does Audrey Roloff Have A Favorite Child?
‘Welcome To Plathville’ Which Way Does Micah Plath Swing?
‘MAFS’ Jasmina Questions Really Knowing Michael On Decision Day