News of Robyn and Kody Brown getting a divorce are circulating Sister Wives fan groups today. The news came attached with a screenshot. A screenshot of an article on a fairly reputable news outlet — TMZ. Those who follow news on TMZ know the outlet doesn’t have the habit of reporting things that aren’t true. So, is it true?

Most are going to think the same thing when they see this screenshot of Robyn and Kody Brown’s divorce. Fact or rumor? We wondered the same thing. So, we did a little digging. First things first, searching Kody and Robyn Brown divorce on Google makes sense. If this divorce is happening, it would be huge news. There’s no way media outlets wouldn’t have reported on it.

Unfortunately, when you search Kody and Robyn Brown divorce… The only thing you will find is reports on his struggling relationship with Meri. According to Entertainment Chronicle, Robyn Brown is praying Kody Brown and Meri work their strained relationship out. Despite the picture Sister Wives might paint of her being the favorite, she insists she cares for all her sister wives. And, she doesn’t want this plural family to break apart.

Meri Brown, however, tends to double down on the fact that she only spends time with her plural family during filming. Most of the time, it appears as if they want virtually nothing to do with her.

Is Kody Brown Replacing Sobbyn Robyn With A Fifth Wife?

Producers even asked if Kody would take care of Meri if she got COVID. He insisted he would. But, Meri laughed at his response noting it was a lie.

Ok, so did TMZ report on this Sister Wives break-up?

Not finding anything about the divorce of Kody Brown and Robyn on Google is a little suspect. But, we decided to go straight to the source. So, we visited TMZ’s website and we scrolled through the page. Unfortunately, we were unable to find anything that resembled the screenshot down below. 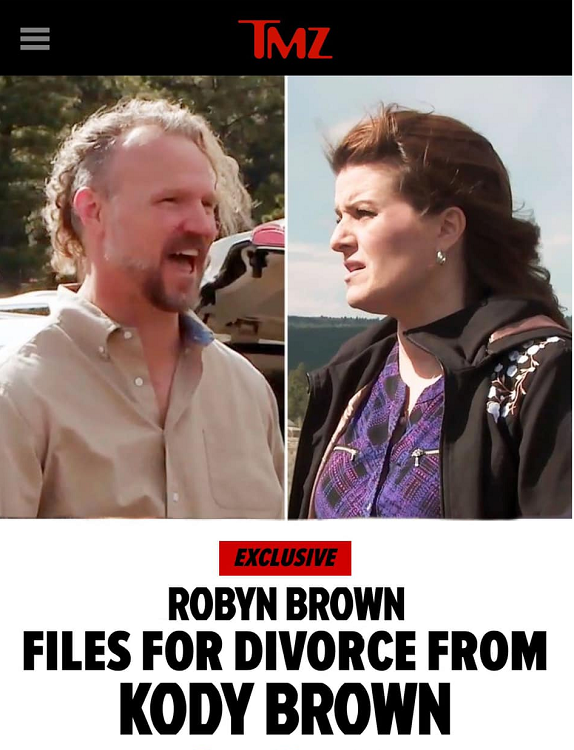 The screenshot above suggests Robyn Brown filed for a divorce. The word “exclusive” across the top of the headline just made the screenshot feel more legitimate. Why? Well, it suggests TMZ scooped the original story.

After doing some digging, we can confirm this story was never published on TMZ’s website. Likewise, it hasn’t been published anywhere else. Someone just doctored up this photo to look real. And, then they started sharing it in Sister Wives fan groups. It spread from there.

Are you happy to know Robyn Brown and Kody are not getting a divorce? Were you hoping Sobbyn Robyn was being cut from the family? Share your thoughts with us in the comments.