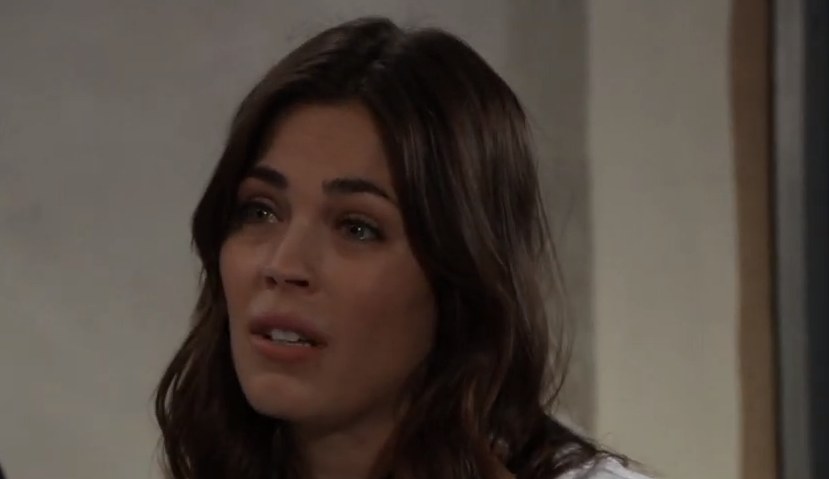 Viewers will not want to miss Thursday’s episode of General Hospital. Spoilers promise major developments on multiple fronts, and much of the drama ahead revolves around Peter.

During Wednesday’s show, Maxie confided in Britt. The two women are determined to keep Maxie and her baby safe from Peter. What Britt did not expect was the plan Maxie felt had become necessary.

Maxie believes she needs to fake her baby’s death. She admitted she didn’t have all of the details figured out yet. However, she knew that she needed Britt’s help.

The proposed plan stunned Britt. She worried about her own theoretical role in it, and she also speculated that Peter would never believe it. Maxie remained determined despite Britt’s doubts though.

General Hospital spoilers for the April 1 episode reveal that this conversation and planning session continues. Britt has an important question for Maxie, as she asks how far Peter’s former fiancee is willing to go.

Maxie seemingly listens seriously as Britt poses this question. Initially, Maxie suggested claiming the baby was stillborn, but send her away. Then, Maxie could join her a few weeks later. Britt, however, felt that wouldn’t be enough.

According to SheKnows Soaps, Maxie and Britt will work together to flush out a plan. Britt knows the bad side of Peter better than Maxie, and she has the medical knowledge needed to make this work. However, Maxie’s the one who needs to pull this off from start to finish.

Where is this scheme headed? By the looks of the reaction across Twitter, General Hospital fans have mixed feelings about this.

“So they’re just gonna keep recycling the same baby storyline again and again. Wiley is two years ago and that storyline just wrapped. Now we have to see again with Maxie. Just get rid of Peter,” one viewer tweeted.

“This idea of Maxie’s is smart and could actually work if the needed people play along,” someone else noted.

There has already been speculation that Brook Lynn is faking her pregnancy. If she is, it doesn’t seem that anybody else is aware of it. Could Maxie’s plan end up overlapping with Brook Lynn’s in some way?

Maxie’s smart and has a history of being plenty mischievous. However, Peter is evil and is not going to be easy to fool in this case.

At this point, there are several different alliances trying to take down Peter, and he’s mostly unaware. Anna, Carly, Jason, Valentin, and Robert are pooling resources on one front, and now Maxie and Britt are handling the toxic situation another way. General Hospital spoilers hint that things will be quite dramatic in the days ahead and fans cannot wait.