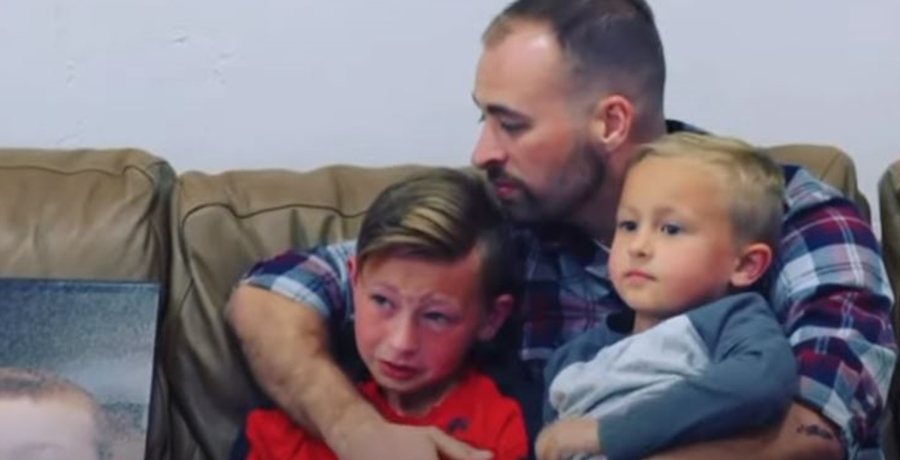 Is TLC exploiting the Blended Bunch with terribly sad scenes involving the kids? Recently, fans saw a lot of tears and overly emotional scenes on the show. Fans saw Rachel, Aimee’s mom visit with the Shemwell family. Tears flowed and a lot of issues arose over the kids, the grandparents, where they live, and what the kids should call them. But, in a particularly sad scene, Aimee’s son broke down crying.

We reported that spoilers came out that TLC might be editing to create a lot of drama. For example, Erica’s sister explained to fans a bit more about the adoption issues that they see on the screen. There’s been some controversy from fans about how the show makes it look like the kids are forced to take Spencer Shemwell’s name. Chatting with fans, Alexis Isaac clarified that’s not true at all. Additionally, she noted that TLC doesn’t clear up the fact that the kids actually have options. Apparently, they could choose whichever names they wanted. Even the option of hyphenating their double-barrel names is free for them to choose.

So, we speculated that maybe TLC’s exploiting The Blended Bunch situation for more drama. However, it seems there are other things that the network might manipulate. Certainly, the network grows a bad reputation for that sort of thing. However, it seems that other scenes outside of the adoption deliberately create tears and emotion. Especially when it comes to the grieving by the kids.

Erica Means said in her blog, that they did the show as part of their “healing process.” Furthermore, she talked about how they encourage the kids to cry and share the special memories of their deceased parents. Which sounds great, therapeutically. However, is TLC deliberately making the kids cry?

Crying for the cameras deliberately encouraged?

Katie Joy from Without A Crystal Ball wondered how much TLC’s exploiting The Blended Bunch kids’ emotions. Actually, she might not come over as every fan’s cup of tea. However, she talks to her sources, and one of the main ones from The Bended Bunch is Erica’s brother, Quinn. Taking to her YouTube vlog a few days ago, Katie revisited the scene where Brayden, Aimee and Spencer’s eldest son, Brayden (12),  cried over a picture of himself with his mom. Recall, Aimee’s mom gave it to him in an episode and the poor little guy cried his eyes out.

Fans saw grandma Rachel give it to Brayden and she talked about how she specially got it made. Is that an example of TLC exploiting The Blended Bunch kids with an emotional scene? After all, it turns out that the idea didn’t originate with Rachel. According to Quinn who spoke with Katie, TLC actually made the picture and told her to give it to Brayden. Next, fans saw the scene where Spencer produced a tree. They planted it in memory of Aimee. Well, Katie Joy spoke about how that seemed a nice idea. Nevertheless, it also seems a bit weird as Spencer rents the place.

Lots of tears as the family planted a memorial tree

Once again, the possibility of TLC exploiting The Blended Bunch kids to make them cry arose. When Katie spoke with Quinn about the heartbreaking scene, it turned out TLC dreamed up that as well. They provided the tree and “told them to plant the tree.” They also supplied the pictures of the deceased parents for the tearful ceremony. In both situations, without TLC creating those scenes, the kids wouldn’t have had to endure more tears and heartbreak.

In the comments section, it seems that a lot of fans agree that TLC’s exploiting The Blended Bunch kids. One of them wrote, “TLC should be ashamed.” Plus, the critic said they stop watching as they “can’t bear the child manipulation.” And another one noted, “My dad died when I was a little girl. I was traumatized. I [cried] often and long. It took me years.” They talked about the show as “exploiting and abusive.”

Shout out your thoughts on whether you think TLC exploits The Bended Bunch kids and makes them cry for added drama. After all, Katie mentions that her views should not be “considered fact.” Additionally, she notes that people should also conduct their own “research” on her topics. Sound off in the comments below.