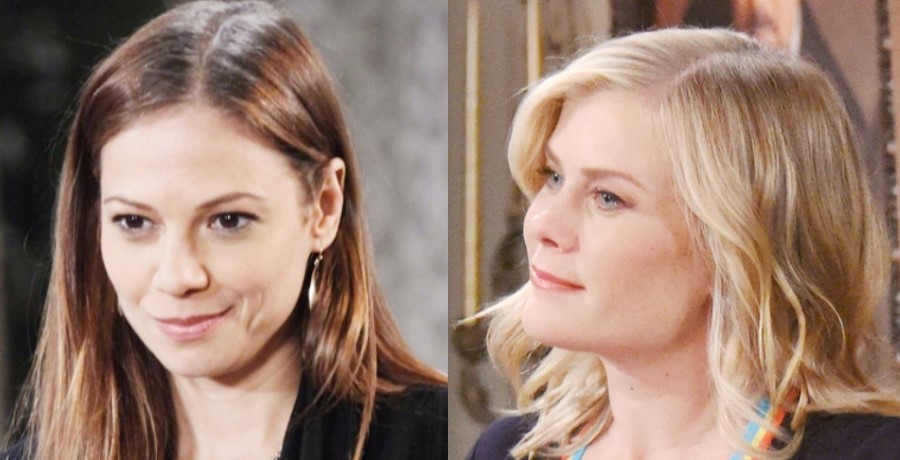 Days of Our Lives spoilers for the next two weeks beginning Monday, March 29, through Friday, April 9, show Sami Brady (Alison Sweeney) confides again in Lucas Horton (Bryan Dattilo). This time she updates Lucas on the sad state of her marriage to EJ DiMera (last played by James Scott).

Plus, Ava Vitali (Tamara Braun) has a secret she’s hoping her bestie Nicole Walker ( Arianne Zucker) will take to the grave on the NBC soap.

Days of Our Lives spoilers show Ben Weston (Robert Scott Wilson) is at his wit’s end over Ciara Brady’s (Victoria Konefal) selective amnesia. He’s devastated she cannot remember their great love. Plus, he’s also saddened she’s afraid of him since she only remembers him as the Necktie Killer.

Ciara Brady trusts Marlena Evans (Deidre Hall). So she agrees to allow her to hypnotize her to try to unlock her memories, say Days of Our Lives spoilers. After all, Marlena has had great success just recently with helping Allie Horton (Lindsay Arnold) remember it was Charlie Dale (Mike Manning), not Tripp Dalton (Lucas Adams), that raped her in London. Plus, Marlena loves Ben like a son. So, of course, she wants to help him get his wife’s memories restored so they can continue their great love story.

Days of Our Lives spoilers reveal Ava Vitali makes a confession to Nicole Walker. Nicole already has suspicions her bestie might not be telling the truth about her involvement in her son’s murder. Plus, since Sami already confessed, Ava’s more or less in the clear. Recall she’s a mob princess. So she’s likely picked up a trick or two along the way. Plus, if a threat is squashed and your hands are clean, why raise suspicions?

Days of Our Lives spoilers say Ava asks Nicole to keep her confession between the two of them. Depending on exactly what Ava reveals, this might not be a request Nicole will keep. Secrets always have a way of coming to light in time.

DOOL spoilers tease this secret will put Nicole in jeopardy. So her conscience will get the better of her. Certainly, Nicole doesn’t like her sister-in-law Sami, but if Ava’s guilty of Charlie’s murder, there’s no way Nicole will let Sami go to jail for Ava.

Days of Our Lives spoilers in two weeks have Gwen Rizczech (Emily O’Brien) making good on her promise to her father Jack Deveraux (Matthew Ashford). He wants Gwen to end her vendetta against her sister Abigail Deveraux (Marci Miller). Likewise, he asked Abby to do the same with regards to Gwen.

New Days of Our Lives spoilers say Gwen apologizes to Abby’s husband, Chad DiMera (Billy Flynn). It’s not often Gwen’s apologized for anything. So will Chad accept her apology at face value or dismiss it as yet another part of Gwen’s scheming ways?

Days of Our Lives Spoilers: Sami Brady’s Marriage To EJ DiMera In Trouble

Days of Our Lives spoilers informs that Sami Brady finally gives an update on her marriage to EJ DiMera. Of course, it makes sense that she confides in Lucas Horton. After all, he really is her one true best friend and the father of two of her children. Since the role of EJ DiMera is confirmed as recast, it certainly makes sense for his name to be dropped in advance of his debut.

Days of Our Lives spoilers suggest Sami shares with Lucas her marriage to EJ is not in a good place. No doubt, being his caregiver as he recovers from his shooting, resurrection, and the warehouse explosion couldn’t have been easy on her —or their marriage.

DOOL spoilers say Lucas will be in Sami’s corner. However, many long-time fans of Lucas and Sami as a couple cannot hope that the two are finally put back together.

Rafe Hernandez is hard at work trying to solve the WhoDunnIt murder of Charlie Dale on Days of Our Lives. He doesn’t believe Sami killed him even though she confessed. She only did that to protect her daughter Allie Horton. But Allie also isn’t the murderer. So who is? And why is Sami still in custody?

Days of Our Lives spoilers tease Gabi Hernandez (Camila Banus) tells her brother she knows who killed Charlie Dale. However, Gabi might be playing games to be spiteful. Rafe does end up clearing one suspect under suspicion, and he’s moved onto his next prime suspect—but is this the right person?