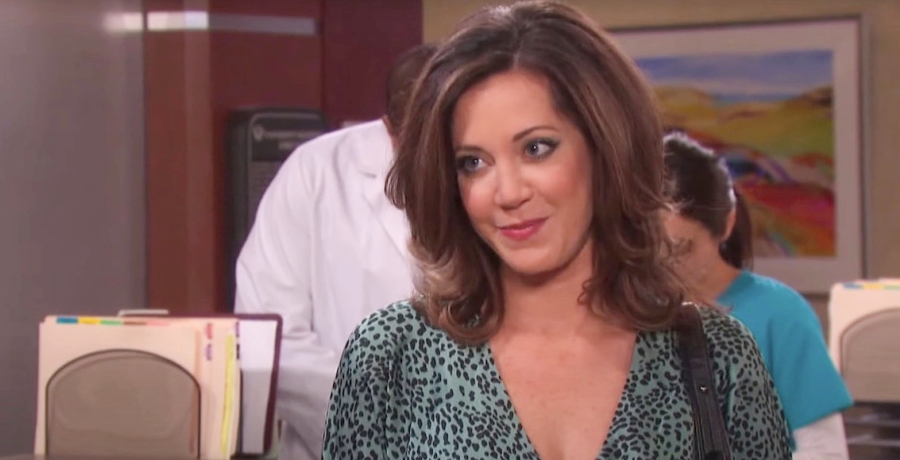 Days of Our Lives spoilers for the week of March 29 reveal Xander Cook (Paul Telfer) is in attack mode after Sarah Horton (Linsey Godfrey) breaks his heart. Kristen DiMera (Stacy Haiduk) needs a favor from a fellow inmate.

Days of Our Lives spoilers show Kristen DiMera runs amock in Salem, impersonating not one but two other Salem women. First, she swapped places with Susan Banks (Stacy Haiduk). Now she’s playing double duty wearing a Sarah Horton mask. So, her simple plan to run interference and keep Chloe Lane (Nadia Bjorlin) away from her boyfriend, Brady Black (Eric Martsolf), has taken a few unexpected turns. Now the sinister DiMera needs an assist from another woman as diabolical as herself —enter Vivian Alamain (Linda Dano).

Days of Our Lives spoilers say Kristen is in over her head and reaches out to Vivian for her help. It looks like Kristen is taking full advantage of having her brother’s mother as an ally in Statesville. Kristen is in a jam, and Vivian is the only one who can help her wiggle her way out of this one.

Days of Our Lives spoilers remind Xander Cook was caught off guard when “Sarah” dumped him hours before their wedding. The hunky Aussie never saw that coming. Plus, the way he found out was rather suspicious. So, of course, Xander is heartbroken and lonely.

Days of Our Lives spoilers say Xandr turns to booze to numb the pain of losing Sarah. However, let’s just say  Xander is not a happy drunk. Rather he’s a bitter and angry drunk. DOOL spoilers say Xander attempts to get physical with Roman Brady (Josh Taylor). The keyword is attempt. Salem’s ex-top cop may be up in years, but he’s still able to neutralize Xander pretty quickly and with ease bounces him from The Brady Pub.

Kayla Brady And Steve Johnson Deal With A Surprise Pregnancy

Days of Our Lives spoilers show Kayla Brady (Mary Beth Evans) shares shocking pregnancy news with her husband, Steve Johnson (Stephen Nichols). Now cannot be Kayla that’s pregnant. She far past her childbearing years. So someone in their family could be expecting a baby.

A few ladies top the list of potential new mommies to be on Days of Our Lives. However, since this DOOL spoiler is for April 1, it’s more than likely part of  Ron Carlivati’s annual AprilFools Day stand-alone pranks.

Days of Our Lives Spoilers: Sami And John Battle It Out Again

Days of Our Lives spoilers once again show John Black and his stepdaughter Sami Brady in another battle of hurtful words and accusations. The last time Sami was in town, she and John sparred, and he collapsed from an aneurysm. Although it was not her fault, she certainly triggered the medical emergency.

Again since this spoiler is also airing on April Fools Day, it has to be part of the bonus stand-alone April Fools Day episode. We’ll just have to toon in on Thursday, April 1, to see what is true and what is a prank.

Days of Our Lives spoilers confirm Heather Lindell returns as Jan’s Spears this week. After months of being in a coma after a knockdown drag-out fight with John Black, the trouble maker is awake and ready to wreak havoc on her enemy Belle Black.

Of course, Jan’s got leverage on her side. After all, she can provide damaging testimony against John for his attempted murder charge. So will Jan force Belle to divorce Shawn and Shawn marry her in exchange for John’s freedom?  No doubt, whenever Jan’s on canvas, trouble and mayhem ensue on the NBC soap.