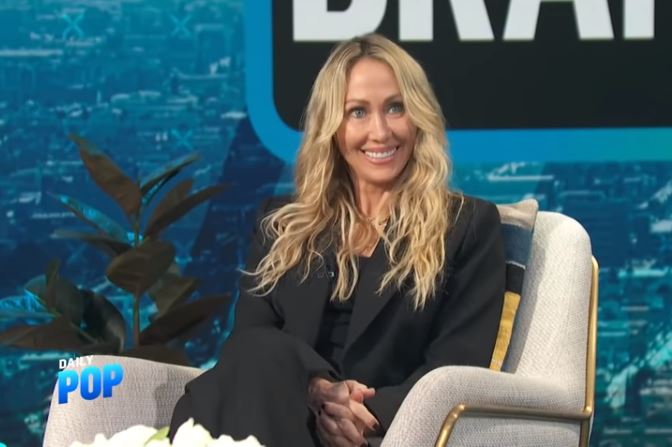 Tish Cyrus dished the details of life on the road with her talented kids, and how she tried marijuana and started smoking for the first time at age 42, and how she escaped a burning tour bus too.

Cyrus appeared with her daughter Brandi and the two shared the fun they have making their joint podcast that covers everything, from relationship advice to sex, and the funny things that happen with famous people and celebrity families are touring the world.

Interestingly, Cyrus described Brandi “as the easiest” of all her five children.

Tish Cyrus Reveals Why She Started Smoking Marijuana at 42

A traumatizing experience while touring is rehashed by Tish who shared she barely escaped a burning tour bus.

The Cyrus matriarch said: “I was so against it. Like, never in my life had I ever smoked [marijuana] until I was 42,” Tish told co-hosts Carissa Culiner and Justin Sylvester.

“But, I was on tour with Miley and she had gone on—we were going from like, Houston to New Orleans—and I stayed behind to meet up with friends and on the way to New Orleans our bus caught on fire.”

As Tish continued, she recalled her harrowing journey with another daughter Noah Cyrus and said that their bus burned to the ground “within three minutes.”

“I had gone back to go to bed and all of a sudden I heard this huge noise, which I thought could’ve been a gunshot,” she shared. “It was the tire blowing on the bus.”

After the bus pulled over, the bus driver advised Tish to collect all her belongings as the bus was on fire.

She said: “I panicked, Noah was little, I got her off, my dog, I was trying to get the manager up. He had earplugs in and was in bed asleep already.”

No harm no foul

According to the Cyrus duo, they survived and learned from the scary experience. Tish said that thankfully, everyone was able to get to the side of the road—to watch the bus burn to the ground.

But this frightening experience caused her to have sleepless nights. Although she tried Ambien, she said she “hated” the popular sleep aid. The hosts chimed in agreeing Ambien was not a favorite.

“That’s actually how I started smoking,” Tish added. “Miley said, ‘Mom, why are you putting a chemical in your body that makes you feel so bad the next day?'”

As Tish detailed it, marijuana “really did help” her sleep. For more candid conversations from Tish and Brandi, be sure to catch Sorry We’re Stoned every Thursday on Apple Podcasts.