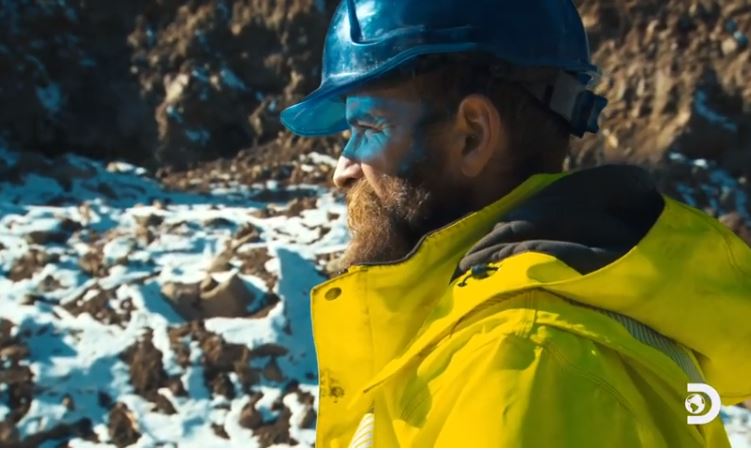 The finale of Gold Rush is upon us as Discovery and now discovery+ have one of the very top-rated shows in reality TV.   And it’s a tough road still for veteran miner Fred Lewis.

Lewis has learned the hard way that mining is a skill and an art, aided by luck and intuition.

Lewis assembled a band of brothers as he attempts to become independent and help his fellow war hero veteran team.  Some of their stories are unbelievable, like Johnny Stanz who should have been dead from the severity of his injuries.

What happens on Gold Rush?

Fred Lewis is watching as Alex, Kyle and Stuart are trying to move some water and dirt. The hiccup this time is the temperature. The water is frozen and Fred is trying to manage the new problem as his guys appear to be over the tough season.

Talking on his radio, Fred says: “The ice has met its match.”

Driving the dozer Alex Voigt says:  “All right here we go…ah ice, ice baby yeah!” His dozer smashes through the ice crust in the pond.

But the water is not cooperating, as we watch Stuart McKenzie kick a solid tube filled with ice.

McKenzie says: “That’s not good. Hey Fred, one of the hoses didn’t drain. I think the hose it’s frozen solid.

Aggravated, Fred says: “Yeah all right dude, this is probably too big to move by hand. Let’s get Kyle over here in the loader and just drag it out…[he radios Kyle to assist] Hey Kyle, needs you to come on down next to the pump and drag this frozen hose out of the way

Alex says: “We’re just trying to fight the weather right now… dangerous as hell. I got to back up a really steep grade narrow road I’m right next to this pond the whole time because it’s definitely sketchy.”

Back last week on episode 20, “Attack or Retreat,” a key piece of machinery crapped out on Fred as he mulled whether or not to just end the gold mining foray. This is a tough one if you have been following all the personal stories of his guys and what they had been through.

Their optimism seems to be running out.

Rick Ness is having an eleventh-hour windfall as he is mining on gold-rich pay dirt. And Parker Schnabel and Tony Beets are having some personnel issues and still are managing to reap the rewards of their experience and locations.

About Fred Lewis and his team

In Oregon, Lewis had brought together a crew of veteran buddies on the promise of gold and independence. But the reality is hitting hard as after weeks of setbacks and failures, with their life savings poured into the venture.

Lewis has assembled a team of wounded vets and war veterans who all want to break free from a traditional work environment and be masters of their destinies.

Freddy Dodge’s nephew Kendell Madden, Stuart McKenzie, Stefan Generally, Kyle Pletzke, and Johnny Stanz, a former Marine raider with two Purple Hearts who was in a coma after being blown up by a roadside bomb.

Tune in Friday to see how all the guys end up and if Fred is going to stick with the mining or go back to working with Parker on his spinoff, Gold Rush: Parker’s Trails.

Miss an episode? No worries! All Gold Rush episodes and its spin-offs on discovery+.