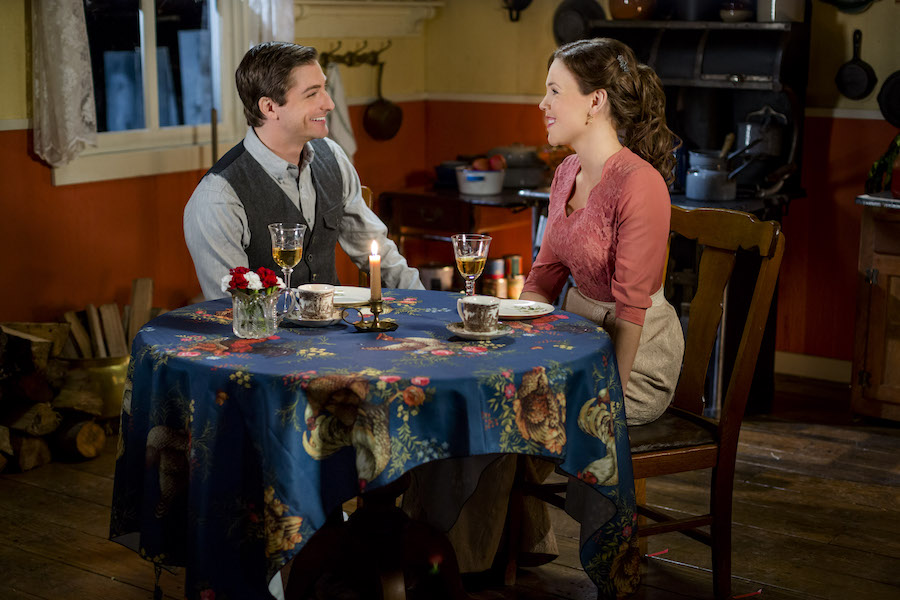 When Daniel Lissing left When Calls The Heart, and Jack Thornton was killed off, it caused a massive heartache in Hope Valley. However, when Lissing left WCTH at the end of Season 5, the Australian-born actor knew he needed to move forward.

In a brand new interview with Paul Greene, his friend and former WCTH co-star, Daniel Lissing speaks from the heart and explains why he had to leave Elizabeth, and the Hallmark fans.

What Is The Real Reason Why Daniel Lissing Left When Calls The Heart?

Hearties are excited that When Calls The Heart Season 8 is already full of romantic moments. Who can deny that the love triangle between Elizabeth (Erin Krakow), Lucas (Chris McNally) and Nathan (Kevin McGarry) is pretty exciting?

However, Hearties still miss Daniel Lissing. Why did he leave When Comes The Heart? For the first time, Lissing shares his exact reasons why.

Speaking to his former WCTH co-star, Paul Greene, on Greene’s new podcast The Grass Is Greener With Paul Greene, Daniel Lissing dives deep into why he moved on. It really comes down to his life’s “purpose.” Lissing has a clear vision of what he wants his life to be. He had that same clarity when he decided to move on from the Hallmark show. That vision overcame any objection thrown his way.

In the podcast interview, Daniel Lissing and Paul green spoke for nearly an hour and a half before Paul asked him why he left the show. Daniel revealed that a lot of people thought he was “crazy” for wanting to leave the hit show. They even suggested that this was a bad career move.

Lissing even seemed to slightly agree with that theory, as he said, “Everyone thought I was crazy.” He paused to laugh, and then admitted, “Maybe they were right.”

However, Daniel Lissing did share why he had to go. This was more than a role and a paycheck. The Rookie actor admitted that he “loved” playing Jack. Yet, he was talking about something big. Dan was talking about his life’s journey.

“I believe in my purpose and I believe in myself, in my journey. And it doesn’t matter what anyone else says, you know, I’ve got a very clear vision of what I want to do, how I want to do it, and the path that I choose to be on in this life… Man, I just loved playing Jack. I really, really did. If there was ever an opportunity to do anything again, I would not be opposed to it. But…in life, you’ve just got to make the decisions… You’ve got a career and you’ve got your personal life… When the two become meshed, you get emotionally involved, that’s when it becomes hard.”

He then continued to discuss how it was so hard.

“And that’s why it was hard for me, because I was emotionally involved with my work… But then you have to weigh up: ‘OK what’s my purpose? What do I want to do?”

Daniel then continued with more questions about his future.

“What do I want to achieve? What path do I want to be on? And how do I get there? What’s going to serve me and my journey in the way that I envision?’ And so, super tough decision to walk away, as a lead actor of a television show in America… Let me tell you, 2012 Daniel would have been like, ‘What are you doing?!’”

People questioned why Daniel Lissing would leave a successful show. However, this is not the first time that Lissing made a decision that others thought was a bit crazy.

When the actor left Australia to go to Hollywood, people questioned why he would do something this crazy. He even shared a quip about Hope Valley. Following your heart is always important. Moreover, Lissing feels more in control of his own destiny.

“You have to follow your heart, and that’s what the show’s all about… Whatever it is, even though people might not agree with you, if you are not hurting anyone, you’re doing something positive for yourself, for your family, for the rest of your life, it can’t be anything but a good thing. I just had to follow my heart…. Since leaving, this has been a transitional period in my life, where I’m taking more control of my destiny in so many areas of my life.”

Ever the spiritually minded host, Paul Greene asked Daniel Lissing what he thought his life’s purpose was. Dan shared something very thoughtful and profound. As an artist, he wants to use his talents to “lift people up.”

“In this life, I’ll put it very simply… In my encounters, I want to lift people up, I want to elevate people through my art… I want to bring a little bit of light and positivity into my interactions and I certainly want to elevate as much as I can, or lift some of the weight that’s on people, through this beautiful medium of television and film…”

Does He Have Any Regrets?

It has now been a few seasons since Daniel Lissing’s character, Mountie Jack Thornton was killed off of When Calls The Heart. Does he have any regrets about leaving the Hallmark series?

What he most appreciates are the fans. The Hearties. “I love you guys, thank you so much for your support, and it is greatly appreciated. And I hope you can continue to follow me as my career evolves and grows into areas that are separate from Hallmark.”

It certainly sounds like his career is evolving. Currently, Daniel Lissing is working on the pilot of a new Fox series called The Cleaning Lady.