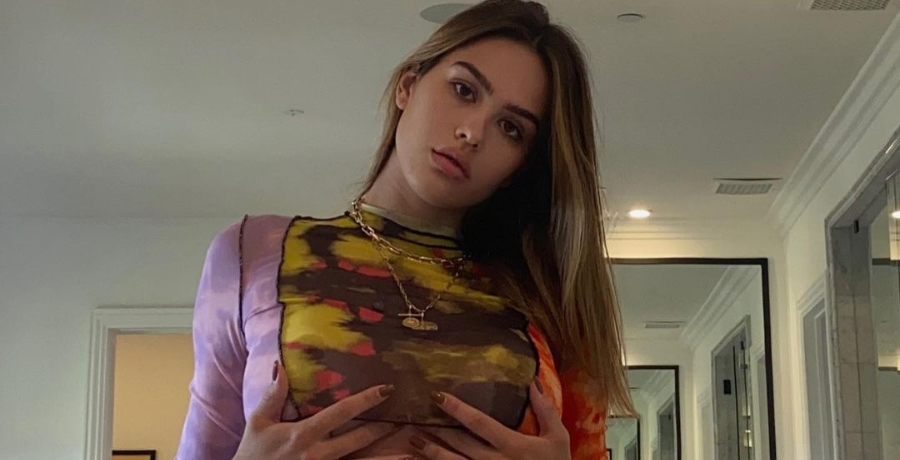 Amelia Hamlin doesn’t care what the haters say about her relationship with Scott Disick. The 19-year-old is ramping up the PDA on social media. Fans were shocked to learn that Lisa Rinna’s daughter is dating the 37-year-old father of three. They wanted to know what went wrong.

Throughout the weekend and well into Monday evening, Amelia shared many snapshots of herself with her new boyfriend on Instagram. In one photo, the model sat in Scott’s lap during dinner. She also wore a cropped cardigan that barely covered her breasts. It has some wondering if she broke Instagram’s rules about displaying her nipples.

Meanwhile, Scott debuted a new bleached look after dyeing his hair pink. The couple continues to have people talking after their trip to Miami.

Amelia Hamlin sticks it to haters with braless photo

The Real Housewives of Beverly Hills star is all grown up and wants everyone to know. Amelia Hamlin shut down the haters with a new photo on her Instagram Stories. She posed in a sheer cardigan that displayed her bare nipples, underboob, and midriff. The reality state mogul wore a tie-dye sweatshirt with several necklaces. Amelia couldn’t keep her eyes off her man.

The black-and-white photo was taken inside a restaurant. The youngest daughter has been linked to the Keeping Up With the Kardashians star since last year. Rumors first swirled in Halloween 2020 when the two attended Kendall Jenner’s party. Since then, Amelia and Scott have been inseparable. This comes after Scott’s breakup with Sofia Richie.

Despite their 18-year age gap, the couple seems to be happy. Amelia even took to Instagram to call Scott her “dream man.” She shared another photo of the two inside a restaurant. This time, instead of posing braless, Amelia opted for a little black dress with a sleek hairstyle. Scott opted for a white hooded sweatshirt as he had his arm around her.

What do fans think of the couple?

The Bravo fan account @bestofbravo shared numerous photos of the couple together. Fans quickly trashed Scott for dating Amelia Hamlin. Many of them have issues with the age difference. Some even took out their disdain for Scott, rather than trashing his teenage girlfriend.

One commented: “It’s so cute that he gives back to children in his community.” Another joked: “What bothers me the most other than his s*** hair is that it’s obvious she’s way into him and he’s just into himself. She’s young and def gonna end up hurt.”

There are some who think Amelia is only dating Scott because of his fame. However, some RHOBH fans are genuinely concerned about Rinna’s daughter. They are aware of her body image issues, mental health struggles, and history of an eating disorder. They fear that Scott could lead her down the wrong path.

As for Amelia, she couldn’t care less what people think of her. What are your thoughts? Sound off below in the comments.