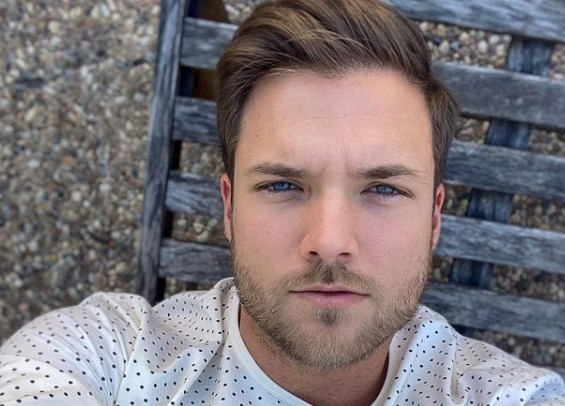 Jordan Kimball has had enough of the cancel culture. The Bachelor in Paradise alum is speaking out about two things. One, he’s stepping up to defend host Chris Harrison. Two, he’s denouncing old tweets from Taylor Nolan that are hurtful to many. Buckle up, the ride just got more interesting.

Along with Rachel Lindsay, Taylor Nolan is very outspoken about racial equality within The Bachelor franchise. However, now, she’s being called out herself for hateful messages. Jordan Kimball went to Twitter to share some past disturbing tweets from Taylor herself. Basically, she’s being a hypocrite. One of Jordan’s tweets said, “If you trace the steps of hypocrites, you will see they never do go the distance.”

As for the things Taylor was tweeting ten years ago, they are disgusting as agreed on by the majority of who saw them. She had horrible things to say about many cultures. The photos of the tweets can be seen below. Jordan put together many tweets she sent out in the past showing how offensive she was. He captioned his post saying, “I hope everyone that enrolled in her emotional labor course gets a refund. Now does anyone understand why this cancel culture is toxic? Podcast University is out. I don’t hate Taylor but I hate these tweets.” 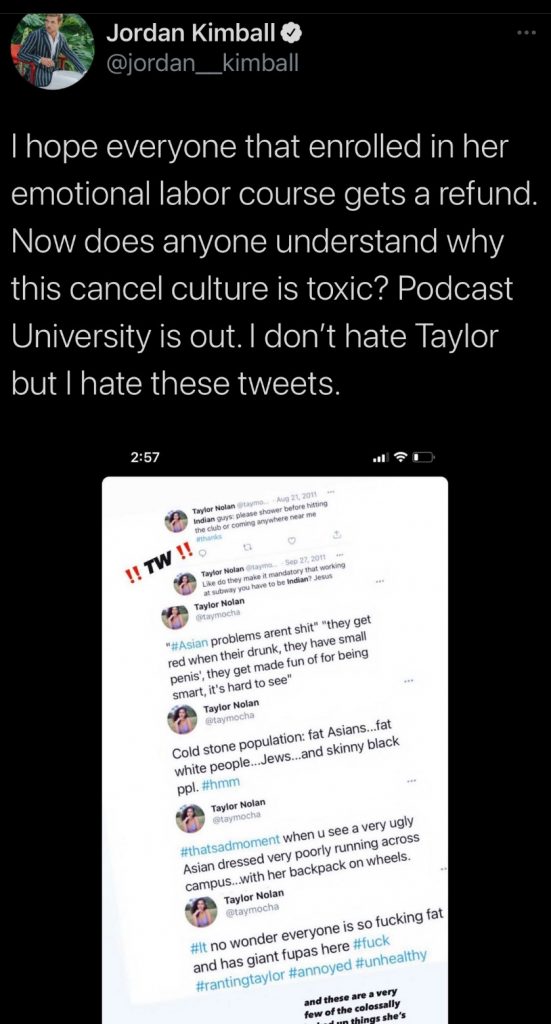 Some things she said include stereotyping cultures, fat-shaming people, and also being horrible to people she feels are ugly.

And, why is he calling out Taylor? Jordan is also standing up for what he believes in regards to Chris Harrison. Taylor has been petitioning for Chris Harrison to be fired from his role as host of the beloved franchise. He said, “If Chris Harrison is removed for good I’m going to raise absolute hell.” Of course, many praised him and others slammed him. One follower said, “Honestly I was a big fan but please educate yourself on why he could be removed. It’s not just one situation, it’s a repetition of racist, enabling events. This comes off as tone deaf.” Jordan came back and said, “Educate yourself on something called the human condition, we are not perfect none of us. So stop condescendingly telling ppl to educate themselves.” 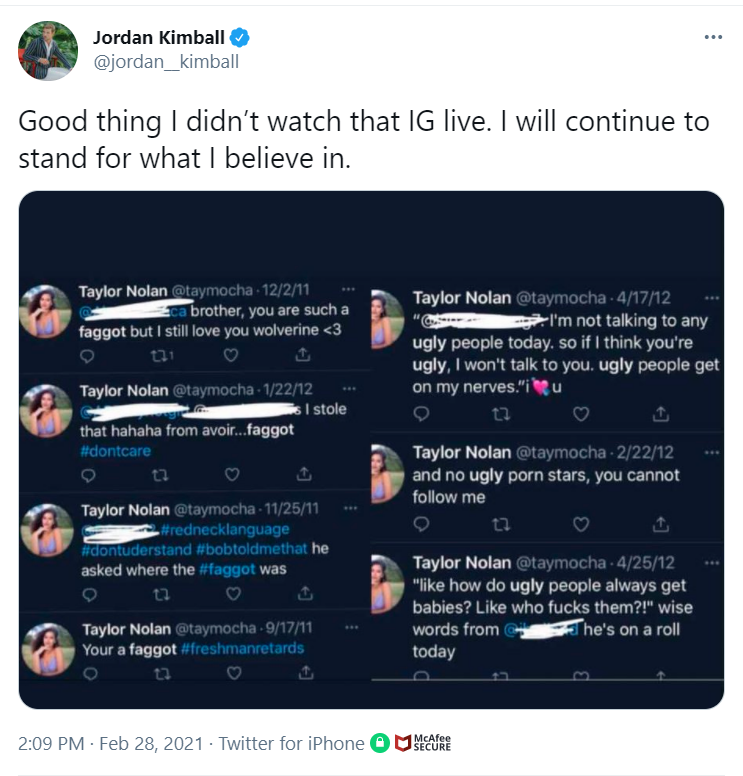 It doesn’t stop there

Even Reality Steve spoke up about this new controversy involving Taylor. He said, “I absolutely denounce Taylor’s tweets from the past. Like most people, never knew about them until today. That isn’t the Taylor I have known. With that said, there is zero place for that type of xenophobia, fat shaming, homophobia, misogyny, etc. Sick to my stomach reading those.”

He continued on saying, “There is zero defense for anything she said. Just like with Hannah B, Chris, Rachael, etc Taylor needs to be held accountable for the things she said. I need to hear more from her about where this came from bc this is disgusting. I hope she understands the magnitude of this.”

The majority of these offensive, disgusting tweets from Taylor occurred in 2012. One tweet, in particular, is disturbing.  It can be seen right below. 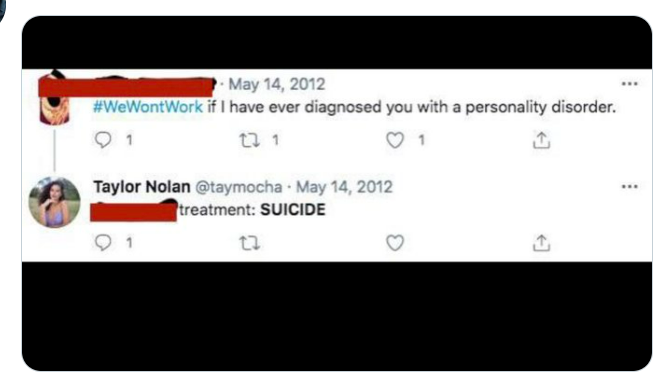 By constantly pointing out the differences between White and Black is Taylor really helping the fight for equality? See below. 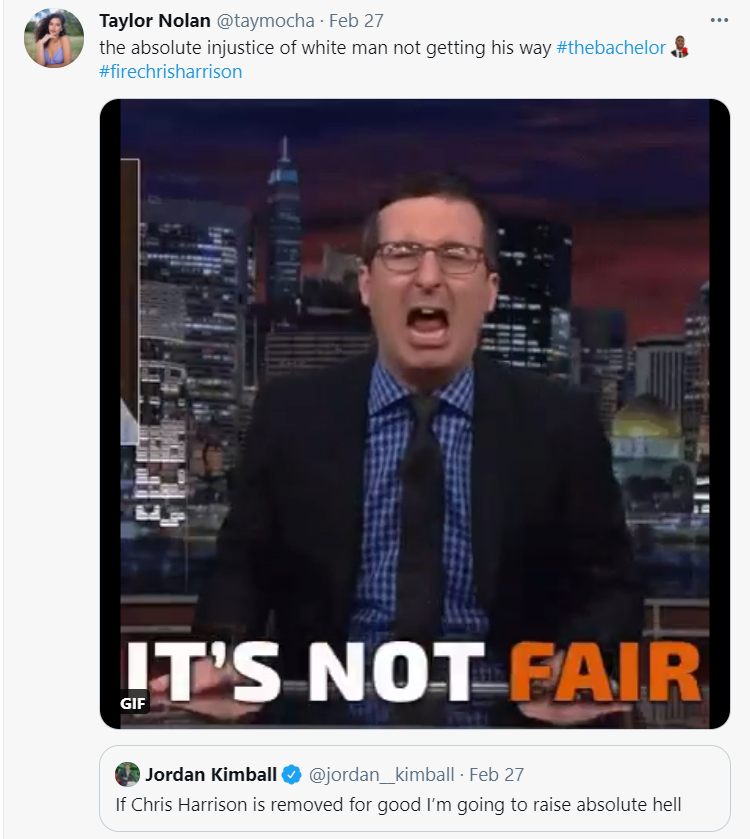 She went to Instagram to speak out. Taylor apologized to “the marginalized people that my old tweets have hurt disappointed or broken trust with, I see you and I AM SO DEEPLY sorry.” She went on to address them more. Then, she said, “To the racist portion of my bachelor nation who have surfaced these tweets in attempt to undermine and invalidate my work over the last ten years, I do not cater to you, I do not apologize to you. I will not ever stop pushing for racial equity and for representation in this franchise and in our culture.” 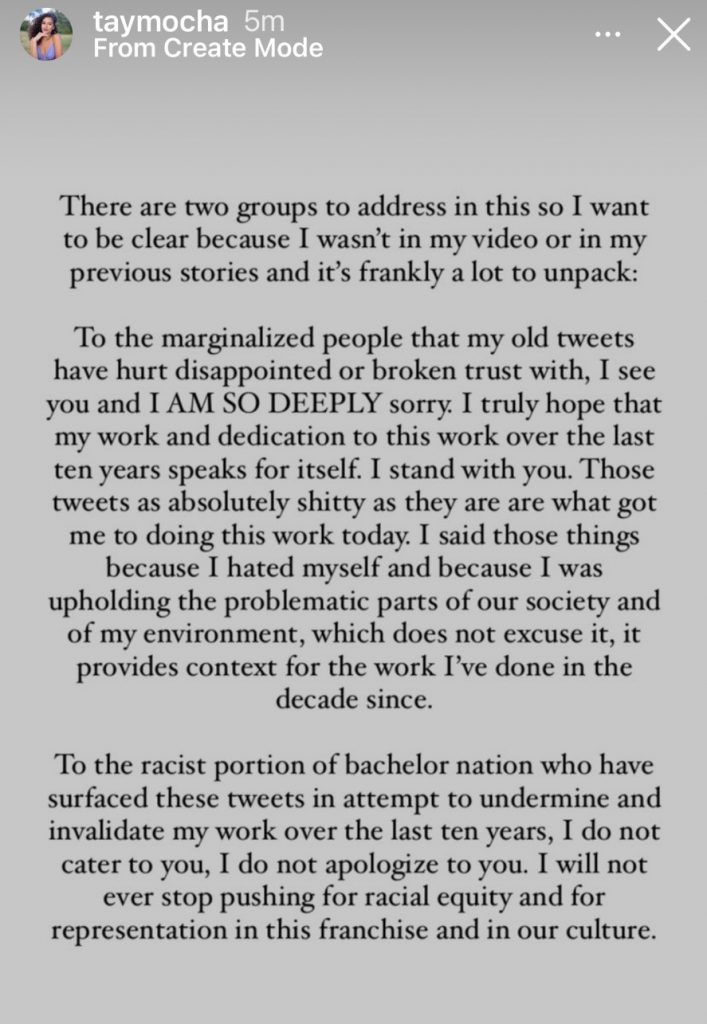 What do you think of the situation arising with Taylor Nolan? Do you think Chris Harrison should stay with the franchise? Do you agree with Jordan Kimball calling her out?