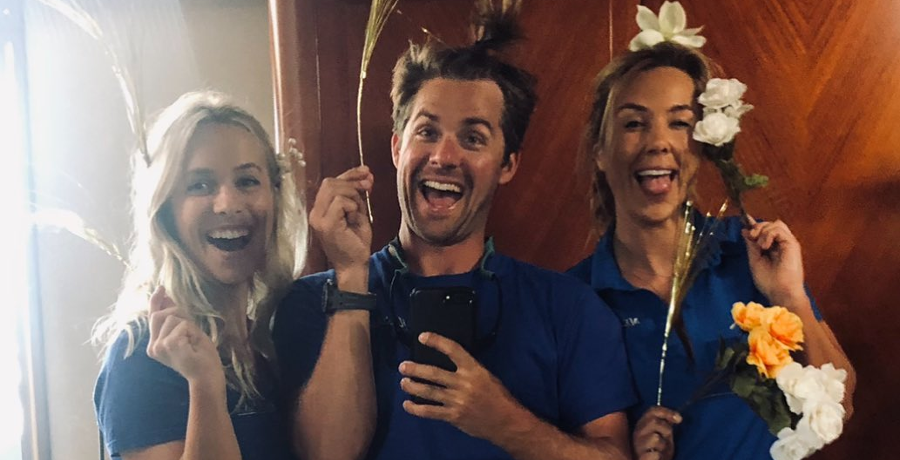 Below Deck star Eddie Lucas is making the romance rumors swirl. Fans have been wondering about his personal life. They can’t forget the time when he hooked up with Raquel “Rocky” Dakota in Season 3. Eddie made his big return to Season 8 after that tumultuous season.

Back in December, fans thought Eddie and Ashling were dating. It all started when Ashling shared a photo of herself snuggling up to Eddie. Both of them were dressed up and it looked as if they were on a date. But the pair has since quickly denied the rumors.

However, some fans are convinced that there’s something more between them.

Below Deck fans see sparks between Eddie and Ashling

On Tuesday, February 23, one Below Deck fan shared a screenshot of Eddie and Ashling during a group outing on Reddit. The fan said that they noticed “sparks between Eddy and Ash.” They wondered if the two are secretly dating since they always sat together on the bus. Some Below Deck fans agree that there is something between them:

“Agree! All season could tell he liked her,” one fan responded. A second user chimed in and wrote: “Right. You can’t argue with that body language.” But not every fan sees it. They believe that the two are just friends. Here are some of the arguments:

But one eagle-eyed fan noticed that Ashling made it clear that she’s a married woman. She flashed her ring on a previous interview of Watch What Happens Live with Andy Cohen. During the episode, tensions increased between Ashling and Elizabeth Frankini. Another fan noted that Eddie has said that he has a girlfriend.

In the latest episode of the Below Deck After Show, Eddie called Francesca Rubi a “bombshell.” His comment had fans wondering about this pair. Also, on Tuesday, Bravo shared this never-before-seen moment from the Season 8 After Show taping. At the start of the video, Eddie was in shock over Francesca’s look.

Both crew members were happy to see each other again, even if virtually. Eddie told Francesca that he likes her straight hair and that she looks nice. He went on and called her a “bombshell.” Francesca joked and said she brushed her hair for the event.

But fans couldn’t help but bring Ashling into the equation. One fan wrote: “I bet Eddie’s ‘bombshell’ comment to Francesca made Ashling a little jealous. I think she has a bit of a crush on him.” A second viewer wrote: “I think he and Ashling would be cute together.”

Others were more shocked over Rob’s mustache. They think he looks good, with or without it. But they hope that he grows into a better person outside of the show. Fans didn’t like the way he treated Izzy after she was promoted to lead deckhand.