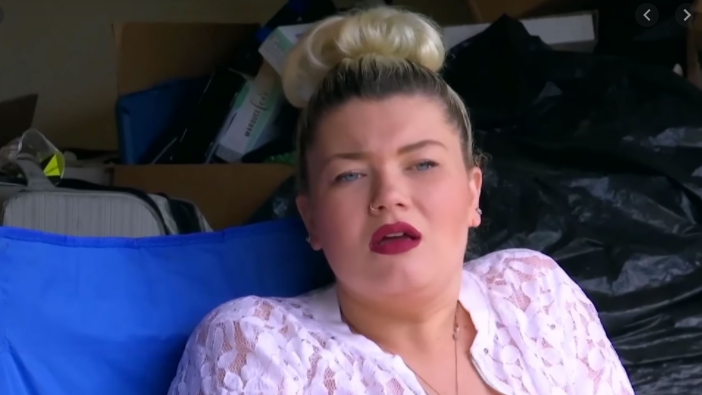 Amber Portwood of Teen Mom OG has a known history of substance abuse. Though she has appeared to be sober for some time, after the last episode, fans are starting to ask, “Is Amber Portwood back on drugs?” Here’s why fans think she might be in trouble.

The answer? She wore the costume “for her brother” on his birthday. Amber Portwood wanted to find a new and unique way to celebrate her brother’s birthday this year. In a conversation that takes place during the episode, Amber explains to her ex, Gary, and his new lady, Kristina, that her brother was in the Army as a paratrooper, and the costume said “Airborne” on the shoulder. So, naturally, the costume was the best way to honor her brother.

“I was wearing this outfit because it says Airborne on it and my brother was an infantry soldier… first Airborne,” She tells Gary and Kristina, “I figured I’d do something different this year for his birthday instead of buying him something extravagant. He really seemed to think it was really cool.”

Despite the above statement, even Amber’s brother seemed confused by her wardrobe choice when she FaceTimed him to wish him a happy birthday.

Fans Notice Signs of Amber Being Under the Influence

In addition to a lack of good judgment, fans are really concerned about the physical warning signs they are seeing. A recent article published by Heavy revealed that fans had noticed a lot of tell-tale signs that Amber might be using drugs again. During the last aired episode of Teen Mom OG, the 30-year-old mother-of-2 sat down to lunch with her ex, Gary. They were accompanied by Gary’s new love interest, Kristina.

During the interaction – the group talked about the possibility of having Amber come to live on their property. Initially, Gary made the offer so that Amber could have the opportunity to spend more time with their daughter, Leah. As of current, Portwood lives about an hour away from her daughter – and doesn’t get to see her very often.

Unfortunately, instead of taking the conversation seriously, Amber bursts out laughing. What fans found so concerning about this is that her laughter seems very odd. Additionally, they noticed that Amber seemed to be having a hard time keeping her composure. She can be heard on multiple occasions rambling and slurring her words. She is also pictured several times with her eyes closed during points of the conversation and looking completely absent from reality.

Like most reality shows, Teen Mom OG has a dedicated fan base that often discusses episode content with each other. One place that fans of the show tend to congregate is Reddit. Recently, on a Teen Mom OG  subreddit, fans were discussing this particular episode. Many of them were very convinced that Amber was under the influence of drugs. From her apparent lack of judgment, to her clear altered state of mind in the clips above, Amber’s case for sobriety is not holding strong with viewers.

One viewer commented that as a recovering pill addict, they are seeing the signs all over Amber.

“I [sic] new it,” the commenter posted matter-of-factly, “I was a pill addict for years and years. Im in recovery now but I know the signs. Amber has relapsed I believe. I hope not but if she is, I hope she gets help. Doing what she is doing to Gary and his wife on social media is what the old druggy Amber use to do. U go thru fits of rage. Just another sign. I hope some body close to her notices.”

Other viewers were less worried and more disgusted by her behavior. One viewer even said she “must be on drugs because she was trying to “[insert expletive] with her own brother. ”

Some Teen Mom OG Fans Have Hope for Amber

Despite Amber’s odd behavior and the possibility that she may have relapsed, some fans remain hopeful that Amber will turn her life around. If not for herself, for the sake of her two young children who clearly lack a stable female role-model in their lives. Many fans expressed hope that someone close to her will see the signs she needs help so that perhaps they can get involved in her recovery. Most feel she’s not going to reach out on her own.

What do you think about this episode? Do you think Amber’s in trouble? Let us know in the comments! Remember to check in with TV Shows Ace daily for all the latest news on your favorite reality shows and celebs!