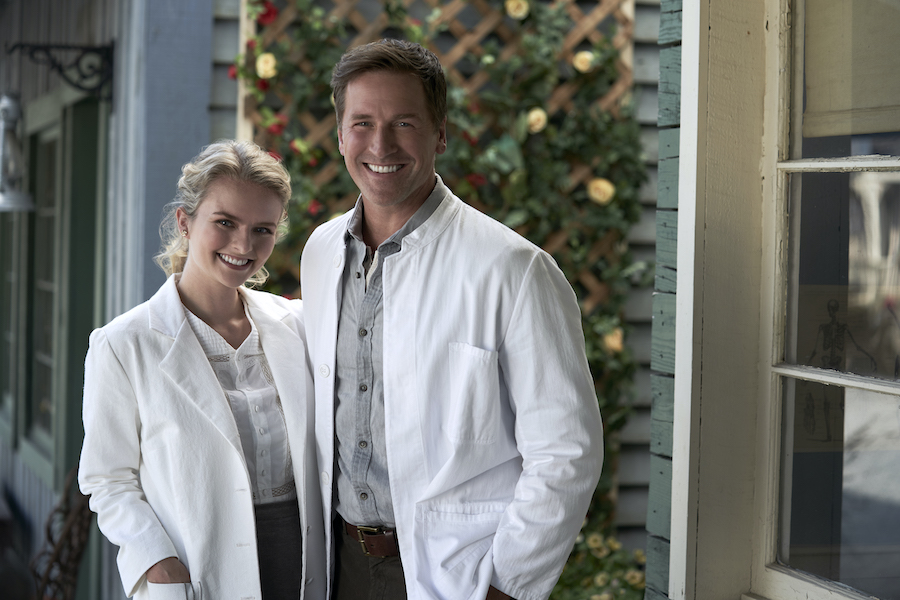 When Calls The Heart is back. The old familiar faces have returned to Hope Valley. There is even a new family, the Canfields, who hearties will get to know soon.

However, there has been a major behind-the-scenes change that fans may notice in Season 8. There is a new showrunner. He is John Tinker, and you may already know his work.

Hearties, are you ready to learn more about the behind-the-scenes changes?

When Calls The Heart Season 8 BTS Is Different

When Calls The Heart is back for Season 8. We are back in the familiar and comforting Hope Valley. However, there is a major behind-the-scenes change.

Andrea Brooks, who plays Faith Carter on the series, was just on the Hallmarkies podcast. She talked about the upcoming season and the big change. WCTH has a new showrunner! He is John Tinker.

Regarding the showrunner changed, Andrea explained that this change was made prior to the Covid shutdown. John Tinker went out to “lunch, dinner or coffee with every major character on the show.”

Andrea explained that Tinker wanted to hear “their thoughts.” She made it clear he didn’t want to change anything about the show. He just wanted to know where the actors thought “their characters were going.”

Brooks shared that this was such a “gift” to have a showrunner “care so deeply.” In addition, she said he spent a lot of time doing this. The end result? The Supergirl actress said that this season, “he really does each character justice.” That is because he “cares about backstory and history and providing little Easter eggs here and there for each character.”

Moreover, she says that “we do allude to the past and we connect our characters in really neat ways this season.”

Hearties should expect a lot of quality time with each character, in the 12 episodes of Season 8.

What Do We Know About John Tinker?

Who is the new When Calls The Heart showrunner, John Tinker? Tinker has a cornucopia of experience as a writer and producer. From creating Judging Amy and Chesapeake Shores, to writing for Chicago Hope and co-producing at LA Law, he has a stellar resume. Hearties are lucky to have him! So is the cast, based on Erin Krakow’s reaction.

Back in May, Erin Krakow, who also happens to be a WCTH producer, went to Twitter to announce the big change. “#Hearties I hope you’ll join me in welcoming our new Showrunner to the @WCTH_TV fam: the VERY talented @brspndr! John will be leading our fantastic returning writers @derekw_thompson & Elizabeth Stewart, as well as our new writers’ assistant @allieiswriting1! Let’s show them ❤️!

#Hearties I hope you’ll join me in welcoming our new Showrunner to the @WCTH_TV fam: the VERY talented @brspndr! John will be leading our fantastic returning writers @derekw_thompson & Elizabeth Stewart, as well as our new writers’ assistant @allieiswriting1! Let’s show them ❤️! pic.twitter.com/0S2s433JIU

When Does When Call The Heart Premiere?

The premiere of When Calls The Heart is on Sunday, February 21, at 9 p.m. Eastern, on the Hallmark Channel. Be sure to tune in and let us know if you are excited in the comments below.