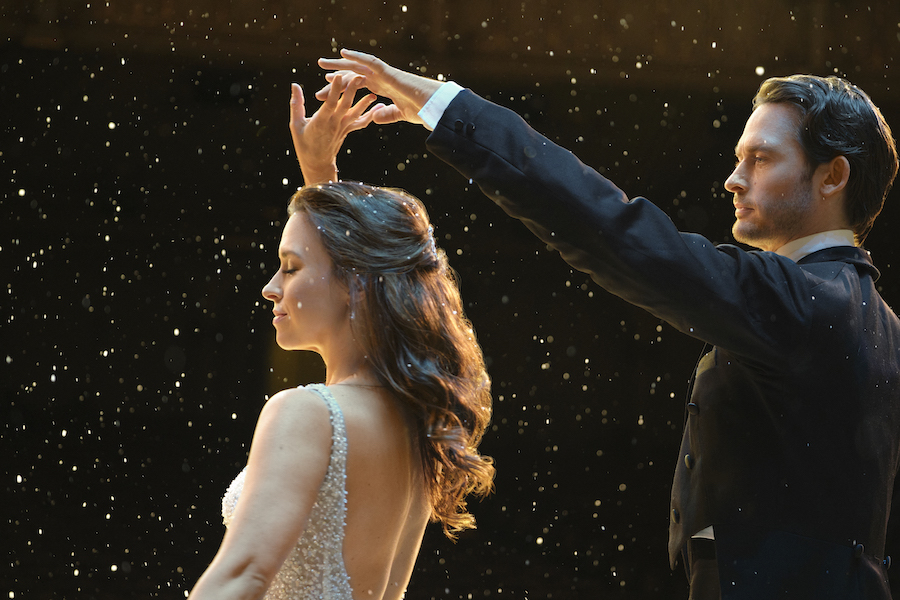 Hallmark has already begun to film their 2021 Countdown To Christmas movies, but there is one title fans are waiting for. They are awaiting the announcement that there will be a sequel to Christmas Waltz, the number one film of 2020.

Ever since Hallmark’s Christmas Waltz aired on Thanksgiving weekend, fans of the Michael Damian directed, dancing Christmas extravaganza, have been waiting for Hallmark to announce a sequel. More people watched it on premiere night than any other Hallmark movie in 2020.

However, there has been no news from Hallmark about a sequel. On Thursday, the Young and the Restless alum tweeted to a fan asking about a sequel, “We need to get everyone to write @hallmarkchannel and request it.”

This glorious movie stars Lacey Chabert and Will Kemp. The charismatic pair have starred in two previous productions together, including Love, Romance and Chocolate. Christmas Waltz is the story of Avery (Chabert) who is startled when her fiancé “puts a pin” on her dream Christmas wedding, in order to pursue a career goal.

What changes her and her entire life is that instead of canceling her wedding dance lessons, she winds up taking them. Her dance instructor, Roman (Kemp), guides her through the dance steps and into following her own heart. This is a sensual movie about learning about self, through art and self expression.

It also includes one of the best dance scenes in Hallmark history. Chabert and Kemp dance down the street in a very Singing In The Rain inspired sequence that is absolutely breathtaking. Although Kemp is a former ballet and modern dance star, this sort of dancing was new to him. And Lacey dedicated herself to learning how to dance in the most difficult of circumstances, during a worldwide pandemic.

The movie ended with a performance of the Christmas Waltz, concluding with a romantic, passionate kiss. Of course fans want to know what is next! How do Avery and Roman combine their very different lives? Is she finally rid of David (Jeremy Guibaut)? What about her parent’s wish for her to marry a “steady guy” from a good family? Does Roman tick those boxes?

We need to get everyone to write @hallmarkchannel and request it🤞🏻🎥💝 https://t.co/cfi65RIAcP

Many Christmas Waltz fans have embraced the Russian nesting doll phase. Roman has a set that his mother gave him when he was a young dancer. He shares a story of how he almost stopped dancing, but the doll, a gift from his mother, symbolized his own metamorphosis. Roman takes out each doll, and finally asks, “Who do you want to be.” This is the essence of what Christmas Waltz is all about.

IRL Will Kemp has also shared that around that same tender age, he had his own doubts about ballet. His own mom kept him dancing, and it transformed his life.

In Christmas Waltz, Roman gifts Avery with a set of Russian nesting dolls that look a bit like her. Their symbolism of personal transformation has been meaningful to fans of the movie. So, it should be of no surprise that Christmas Waltz has now started a Matryoshka doll craze.

According to the Mountain Times, these handcrafted and handprinted dolls have been a sensation. The Golden Cockerel has sold over 400, and over the Christmas holidays, they instantly became backordered. People were willing to drive six hours just to buy a set of Russian nesting dolls. These dolls certainly symbolize childhood dreams and paths that were once forgotten.

There appears to be a long wait for those Hallmark fans who may have missed seeing Christmas Waltz during the 2020 Christmas season. Although Hallmark currently airs a Christmas movie every Friday night, Christmas Waltz has not been part of the rotation since it was part of Countdown to Christmas. The last time it aired was on Christmas morning.

However, fans of Lacey and Will can rewatch their first Hallmark movie together. Love, Romance and Chocolate showings are on Saturday, February 13, at 3 p.m. Eastern, and on Saturday March 13, at 7 p.m. Eastern. Both times on the Hallmark Channel.

Have a Christmas Waltz fan in your life? Looking to give a Valentine’s Day gift or pick me up? Want to help a charity? Or do you just want to hear Will Kemp’s golden voice and sage advice during this crazy time in the world? Will is currently on Cameo and is donating all of his proceeds to charity. Just check out Will Kemp’s Cameo page and check out some of his previous Cameo videos.

So Christmas Waltz fans, have you let Hallmark know you want a sequel?