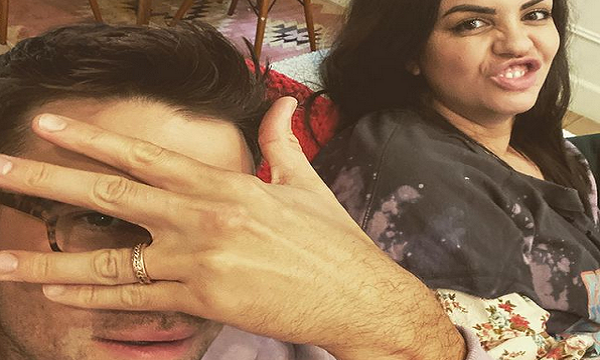 Tom Schwartz shared his thoughts on parenthood. Yesterday, TV Shows Ace showed the first photo of his wife Katie Maloney meeting Stassi Schroeder’s baby for the first time. This comes after Stassi revealed that Katie is the godmother. However, it’s unclear whether Schwartz is the godfather.

He didn’t reveal that in his latest Instagram post. On early Thursday morning, he posted two photos. The first photo shows Katie smiling as Stassi loving looks down at her daughter Hartford. Then, in the second photo, Schwartz is happy as he holds onto her baby girl. Baby Hartford looks quite happy in his arms as well. Check out the photo below.

Is Tom Schwartz having doubts?

In his caption, Tom Schwartz basked his followers that “If you swipe right you can see the exact moment any lingering doubt about parenthood melted away with this little nugget of love in my arms.” He also congratulated Stassi Schroeder and Beau Clark on their little bundle of joy, who’s only three weeks old. Then, he tagged Katie and gave her an “IOU,” which is “redeemable for one.”

It sounds like Schwartz is ready to become a father. This comes just one month after the birth of Stassi and Beau’s baby girl. The TomTom manager seemed to have teased the couple’s plans to have a family of their own. He was so moved by the meeting that it got rid of any preconceived doubts he had about parenthood.

New father Beau Clark also commented on the photo of his best friend holding little Hartford. “My man. Look at your face. Warms my heart,” he commented.

Even Vanderpump Rules fans could tell that Schwartz’s mind has changed.

“Dadhood looks good on ya Schwartzy,” one follower wrote.

“YESSSS PLS GIVE US A BABY BUBBA,” a second chimed in.

Other fans aid that they are “patiently” waiting for Schwartz and Katie to be the next couple in the Vanderpump Rules baby boom. In addition to Stassi and Beau’s baby news, Lala Kent and Randall Emmett, Brittany Cartwright and Jax Taylor, and Scheana Shay and Brock Davies are all expecting babies. All of the couples are due in April.

Tom and Katie talked about their baby plans before

Tom Schwartz and Katie Maloney have been together longer than the other couples. They were also the first couple to get married on the show. They have shared their thoughts on having a baby. It seems like their feelings have increased now that their friends have gotten pregnant.

On a previous episode of Watch What Happens Live, Katie told a caller that she and Tom are ready to become parents.

“I feel like 2020 is the year for baby Bubbas,” Katie said, according to Bravo TV.

Schwartz also revealed that he wanted to become a father. In 2018, he told E! News that he was “ready for kids.” At the time, Jax Taylor said that Katie felt they would all have kids around the same time. However, this couple hasn’t made any plans yet. Check back with TV Shows Ace for the latest news on Schwartz and Katie.