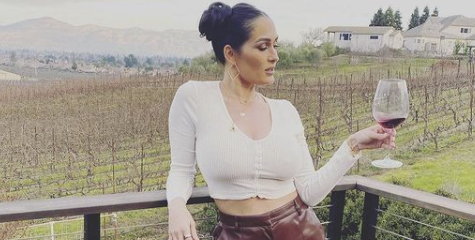 If you followed Nikki Bella on social media during Dancing With The Stars last season, you know she was incredibly supportive of her fiance. Artem Chigvintsev wanted nothing more than to rejoin the cast after sitting out Season 28. Although Nikki showed her support online, she struggled with jealousy in her private life. The WWE superstar opened up to her sister Brie on a recent Total Bellas episode.

“It’s been so f–king hard,” Nikki said during the episode. “I’m trying to keep it together and … I’m about to lose it.”

In case you didn’t know, Nikki Bella also battles postpartum depression. She gave birth to her son Matteo in July. Dancing With The Stars Season 29 started in September. In a nutshell, Artem was stretched pretty thin during the first few months of Matteo’s life, leaving Nikki to raise their newborn mostly alone.

Nikki went on to say that she didn’t really feel insecure that Artem and his partner Kaitlyn Bristowe would run off together. She just felt upset that Artem got to compete and have fun while she stayed home alone with the baby.

“It’s not about her and him,” she confessed to Brie. “Like, I don’t have a fear of Artem going off. That’s not it. It’s wanting what she’s getting from him. Can he come home and laugh with me? Can he come home and ask me how I’m doing? Like, I want to feel wanted and sexy.”

Brie urged Nikki to tell Artem how she felt. However, Nikki said she didn’t want to come across as nagging or needy. After all, she pushed Artem to go back to DWTS and chase down his dreams. And all the hard work paid off. He and Kaitlyn Bristowe won the Season 29 championship. It was Artem’s first time taking home the Mirrorball Trophy.

Artem and Nikki even met on Dancing With The Stars where they competed together during Season 25. She was engaged to John Cena at the time.

After Some Time On The Rocks, The Couple Decided On Counseling

But this isn’t the first time Nikki opened up about her feelings. Us Weekly reports she got very candid with Brie during an episode of their podcast back in September.

“I was starting to feel invisible,” she added. “… It just started to build up. Being alone with [our son], Matteo, and just feeling lonely and not loved and invisible.”

Towards the end of DWTS Season 29, Nikki announced she and Artem planned to attend couple’s counseling once the season officially ended. Things seem to be going well though. She regularly posts photos of Artem on her Instagram page. The most recent one is from today.

Fans really hope that Artem and Nikki will be able to fully move past their problems. They seem so happy together and are very in love with their son, Matteo. Are you rooting for the couple to make it? Let us know in the comments.