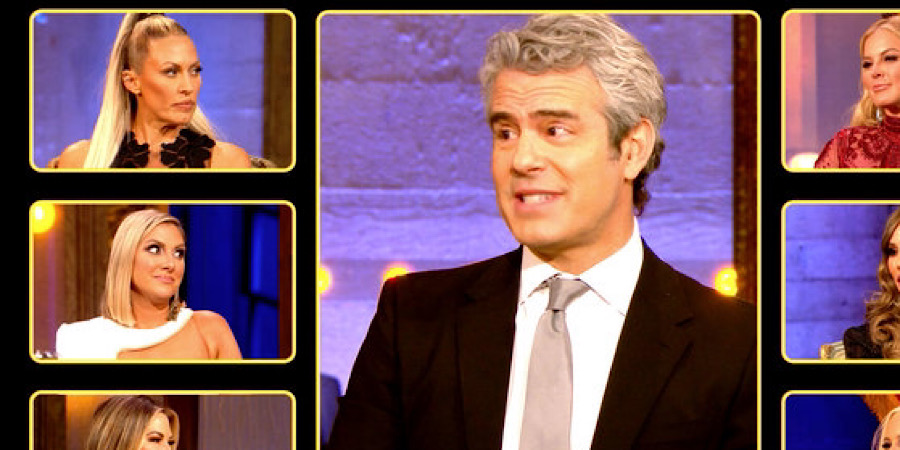 It is time for part one of the Season 15 RHOC reunion. After the preview last week, we have seen anything can and will happen. The ladies gang up on Braunwyn, who almost drank prior to taping and Shannon is confronted about her drinking. There have also been recent allegations that Braunwyn offered Shannon’s teenage daughter cocaine at a party. This reunion might be better than the whole season. Of course, there’s some social media commentary to spice things up.

The Ladies Arrive For The RHOC Reunion And Claws Are Out

Everything is getting sanitized in the studio and Shannon breaks her makeup chair. Just a day in the life of the reunion. Braunwyn already knows the ladies are out for her from the get go. Emily’s mask is below her nose as she walks out and Shannon is worried about her Covid belly. Andy welcomes the ladies, acknowledging Kelly changed her name and Gina finally found a hairstyle that works. Additionally, he asks about Emily’s appearance. She notes she had her implants removed and lost weight so she is feeling better.

The first relationship evaluated is Gina and Braunwyn’s. It was rocky and needed to be rectified, especially after Braunwyn made fun of Gina’s home for being small and sad. She added in that Shannon had the same commentary, something Shannon vehemently denied. She continued to deny it when pressed at the reunion as she is proud Gina is an owner while she is still renting. Gina also misinterpreted a text Sean had sent her after a night of drinking. That needed clarifying. In the end, Braunwyn has apologized but Gina does not believe her. No one seemingly does.

Are Braunwyn and Gina Friends, and Is Shannon An Alcoholic?

Shannon is still reeling from the accusation she said anything negative about Gina’s home. She brings up Braunwyn’s sobriety, as if that makes her somehow better than everyone. Apparently, Sean heard the comment, too. As for Gina and Braunwyn, Gina texted Braunwyn to say she does not necessarily like her but she will always be there for her. It’s a very odd friendship.

“Does Braunwyn think she WONT get called out when she lies constantly???”[email protected]

Onto Shannon and her relationship with John. It got volatile when she would drink and that was also when she would call her friends constantly. They’ve now been together for a year and a half but Covid tested their relationship. Shannon went to Gina when things were rocky with John and she became concerned for her. Gina tried to express this to Shannon but she does not seem to want to hear it. She does not understand why Gina did not reach out more. There was also a rumor about John being too drunk to golf, told by Braunwyn. Bravo invited John to the reunion and he declined.

When asked if she thinks Shannon has a problem with alcohol, Braunwyn nods yes. Twitter seemingly agrees. One fan writes simply, “Shannon is a drunk.”[email protected]

The ladies go for their touch-ups and Shannon calls John who calls Braunwyn a “sober alcoholic.” But, she says she might bring up the Stella issue if her and Braunwyn get into it. We have a smoking gun. The ladies return to the stage to address Covid. Kelly is confronted about her inappropriate comments. She does not like wearing masks and compares them to wearing pants holding in farts. Kelly tries to say she takes it seriously but Andy Cohen says he gets messages about how stupid she sounds. She says her fan base is growing and tells him she gets messages about him being political.

“Kelly is beyond trash. I truly don’t even have words,” @takeyourzoloft writes on Twitter.

He asks about her mom being hospitalized for Covid. She tries to say it was for high sugar. Kelly is flip-flopping as to exactly why her mom was in the ICU. At the end of the day, fans did want her fired for her insensitive social media posts. Emily reflects on her Covid journey and how she thought she might lose her husband. He actually sent a goodbye message to his eldest daughter because he did not think he would make it. Luckily, he did survive.

Meeting Newest Housewife, Elizabeth and Facing Off With Braunwyn

She was a tough nut to crack. When Elizabeth stepped onto the scene, she claimed to be extremely rich but then there were so many questions. She was going through a divorce but had a boyfriend who she never slept with. Now, she is on her own, opened up and has made friends with these ladies. But, her relationship with boyfriend, Jimmy is on the rocks. Opening up about their personal life shook them. Plus, she is admittedly still in love with her ex as he showed her a new way of living and gave her security. Then, Braunwyn had to drop a bomb – Elizabeth’s ex is engaged to his lady of five years. The women attack it as a rumor, but Braunwyn won’t back down.

Elizabeth is furious and tells Braunwyn she did not want to hang out with her in Arrowhead because she never liked her. This is when the topic of Braunwyn doing the title search on Elizabeth’s home comes up. Shannon wants to jump in as Braunwyn threw her under the bus saying she was the one who probed her into investigating. It’s a bunch of bickering until Elizabeth calls Braunwyn the worst lesbian ever.

“I wish the Elizabeth that tore into Braunwyn tonight was the Elizabeth we got all season. Bravo,” Twitter user @bigbrothergossip writes.

Braunwyn Gets Sober On The RHOC

At the beginning of the season, Braunwyn got sober and admitted she was an alcoholic. This is the third time she tried to get sober and has been to rehab before. She admits she’s not just an alcoholic, but she is an addict. Kelly comes out and says her sobriety was for a story line and thinks she was a fake alcoholic. She thinks much of her is contrived while others believe her mom, Dr. Deb forced her into sobriety. This has some truth to it but she and her mom are both into themselves, everyone says. Braunwyn was checked for narcissism and just has a large ego. She says she used to like to get recognized but does not anymore.

Next week on part two of the RHOC reunion, Kelly faces racism while Elizabeth admits she is bisexual. Elizabeth also offers Sean a divorce lawyer as Braunwyn answers for what she’s done. You can catch it all Wednesday night at 9pm only on Bravo.