Welcome back my fellow Chicago Fire fans! It was an excruciating wait, but now that our favorite shows have returned. Let’s talk about everything that went down in this week’s episode. As always here is your warning: SPOILERS TO FOLLOW! If you have not watched the episode and do not want to know what happened, leave now. You have been warned. This week we saw basically exactly what was predicted last week after watching the episode clips that were available. Brett and Casey are having their awkward moments, Mouch is doubting himself after a near-miss on a call and Severide is trying to help Stella the only way he thinks he can. All that said. This week was more of a slow burn, but here is the rundown.

The promo for this episode promised a Brett and Casey talk, and we were hoping for a resolution. However, fans were destined to be disappointed. After their steamy make-out and the immediate cold-water bath of infamous “G”. Brett and Casey were left at an impasse in episode two. Casey is the first to test the waters by approaching Brett and asking to talk. He tells her he is sorry about what happened but that he is not sorry that it did. Brett is a bit surprised by his admission but she is not on the same page as he is about what happened. 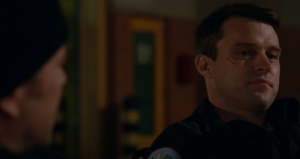 They are interrupted by the ever-perfect timing of the alarm bells, and both head to their rigs. Casey is obviously distracted on the ride to their call, but he pulls himself together and gets to work. During an aerial rescue, the ladder moves and sends Casey over the side. Everyone watches in terror while Gallo rushes to save him. Thankfully Casey comes through with nothing more than a cut on his check; which Brett treats. But after she takes care of Casey she says, “We are done here,” which sounds like the death toll on any potential relationship.

When the two of them finally talk again, Casey doubles down on wanting to give a relationship a chance “regardless of Gabby”. Sylvie seems even more upset by this and simply says, “There is no regardless of Gabby”. And she is right. Matt and Gabby’s relationship is always going to be there. Brett feels like Matt is still in love with Gabby. So, despite how much she may want to be with him, she is not going to play second choice. Chicago Fire is not going to forget its history, so if Brett is right to take some time.

Stella and Kelly start this episode off strong and happy. But, we all know Chicago Fire is not going to let them stay that way. Kelly is offering to help her with prepping for the Lieutenant’s exam. But then Stella goes to HQ to get the test information, and Chief Conway is giving the rundown on the test to the hopefuls. To say he is depressing is being kind, but he clearly has a bone to pick with the fact that Stella is up for promotion. However, the other lieutenant candidates seem excited to meet Stella. Kidd doesn’t register that Chief Conway has an issue and is excited to start prepping for the test to show what she can do. 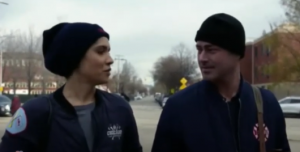 Kelly makes a visit to headquarters to talk to OFI and meets Chief Conway only to get an earful about how quickly people are moving up the ladder. Conway outright states that Stella is getting the leg up because she is sleeping with Kelly and Kelly is close to Commissioner Grissom. Conway makes it sound like everyone thinks this way at HQ, but really it is just petty jealousy. He didn’t fail to mention that he did not make Lieutenant until he was forty-two. But Kelly takes the scuttlebutt to heart and tries to step back so Kidd is not put in the crosshairs. 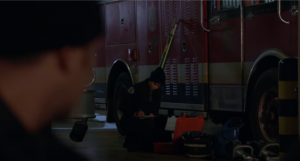 The aerial ladder incident that sent Casey overboard has Mouch questioning everything about what he did on the call. And Herrmann will not let Mouch take the fall for something he did not do. So, he goes on a mission to figure out what went wrong. He asks another house that had a similar aerial incident, but that dead-ended in operator error. But Herrmann is not swayed and keeps digging; going so far as to track down the previous house that had the truck. 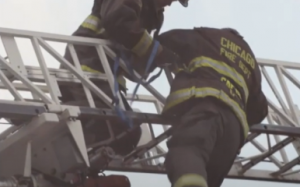 Turns out former Deputy Commissioner Gorsch, we all still hate him, had one last parting gift for firehouse 51. Turns out the rig that Gorsch bought to bribe Boden last season had a recall notice. That recall was for a defective override switch which throws off the turntable and unbalances the aerial. So, Mouch is not at fault for the aerial messing up, and we got to see more of one the best friendships on Chicago Fire.

A couple of bright spots in this episode were Kylie and Mackey. Kylie is finding her footing as she and Boden work together. Boden tiptoes around her for most of the episode until Kylie tells him that she only wants him to treat her as he would anyone else in the firehouse. This relationship has some great uncle/niece vibes and promises to be a fun addition. Mackey is finding her place on the ambo and reaches out to Brett when she notices that Sylvie is having a hard time. She doesn’t pry, which I appreciate but lets Sylvie know that she is there to talk any time. And Mackey helps Sylvie blow off some much-needed steam through some impromptu smash therapy.

But the worry this week is that when Kelly and Casey had their cigar chat this week. Casey came clean about liking Brett, but he decided that he would back off and leave her alone because that is what “she wants”. Kelly questions this decision because he can see how much Casey likes Brett, but Casey tells him that is why he is going to back off. If him backing off is what is best for Brett then that is what he is going to do. Unfortunately, this strikes a chord with Severide, who looks over at Kidd and that tells us that Kelly is going to step away from Stella. Bad decisions were made all around in this chat, and I do not approve.

Casey and Brett shared a few long looks at the end of the episode. So, there may be hope, but Chicago Fire loves to play with our emotions so we are just going to have to play the wait and see game.