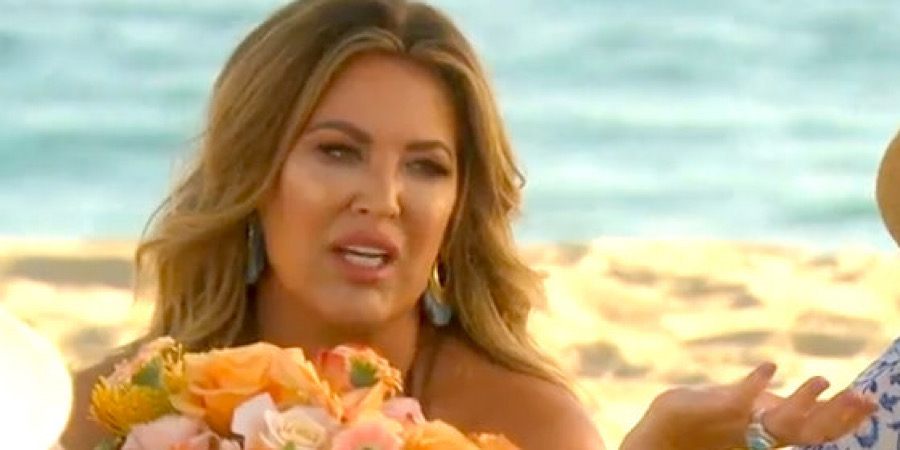 It is time for Season 15 of the RHOC to come to an end. Last week, the women questioned Shannon’s drinking and relationship with John. Brauwnyn revealed how much closer she has become to Shari and how distant she is from Sean. And Gina is beginning to get her life back despite legal issues with ex-husband, Matt. But one last beach party will put all friendships to the test.

Emily has decided to have a beach party. If all else fails, at least the invites are cute. They are handwritten notes put in a bottle. Remember, she was a party planner and this is how Tamra met her. And lucky for her, Elizabeth has offered up her beachfront property! As she is doing the invites, Gina shows up and they decide to go drink outside and gossip. Emily says she thinks Shannon is mad at Gina. It all goes back to when Shannon was having issues with John and would not stop calling Gina. It would be a mess in the middle of the night, drunk dialing her, and then the next day, it would be fine. Gina felt it was a one-sided friendship as Tamra always did.

Over at Shannon’s house, she is freaking out over Sophie leaving for college in three days. Shannon toasts to her daughter at a family dinner. But, she reminds her of all she missed senior year like prom, debutante ball, and graduation. However, Sophie got a partial scholarship to college and is excited for a new start. She says her mom did a great job raising and preparing her for this moment. Everyone tears up.

Kelly’s Getting Married And Elizabeth Confronts Her Past

They are playing a game in the house when Kelly brings up the wedding. Rick suggests they have a small wedding until everyone can come. She has already been married twice so this is right. Kelly brings up Braunwyn and how she is so different sober. She is volatile and not as genuine as she once was. Over at Elizabeth’s, her new therapist comes over. It is time for her to deal with her past and she admits she laughs off everything. The therapist addresses the sexual abuse and asks if Elizabeth lies a lot.

Elizabeth confesses her friends always wanted to get to know her to get to her husband. She never really let anyone in and does not know who she is. When you grow up having to hide a monumental secret, you lose yourself. That is what Elizabeth has done. She recognizes her long journey ahead. But, if her brother can do it, Elizabeth definitely can.

It is the day of the party and the details are being finalized. Shannon is being taped up because she gained the “Covid 16” so she needs extra help to look glam. Looks like a lot more work than the party! Over at Braunwyn’s, she is getting ready with Shari and sharing in her confessional she and Sean have a lot to talk about. She is feeling things and realizing probably what she ultimately shared with GLAAD: she is a lesbian. This may be more of a subject for the reunion but it seems to be leaning this way. She also really is feeling herself right now, unlike Shannon who is all taped. Shannon’s twins ask if she can even breathe.

Braunwyn says Sean is the love of her life and her life partner but you know when you are in love with someone. Guess this will be revisited later. Gina arrives early to the party so she and Emily can chat while Elizabeth is getting ready. Kelly is next to arrive followed by Braunwyn and Shannon. Shannon brings everyone custom face masks with silly sayings from the season. At least they can take a joke…this time. While some of the ladies are off taking shots, Braunwyn tells Gina she is on step 9 and goes to two meetings a day. She also says she is starting school to be a drug and alcohol addiction counselor.

It was only a matter of time before the gossip started. As they headed from cocktails to the beach, Elizabeth mentioned to Kelly how Sean moved out and Shari had moved in. Then, Emily and Gina start talking to Shannon about her relationship with John. Emily notes when Shannon drinks, she does not say the nicest things about John and then sober, tries to retract. Shannon says she wears her heart on her sleeve, this was a fairy tale relationship after a bad marriage. She did not want to see any cracks. When she did, it freaked her out too much.

On the beach, Kelly asks Braunwyn how her daughter, Rowan, is. She had battled horrible OCD, had recovered but it came back full force during quarantine. Braunwyn mentioned this in Arrowhead and now she is acting like it is all rainbows and butterflies. They go back and forth about calling each other and Braunwyn says she does not call anyone. She says she only talks to one person exclusively, referring to Shari. Kelly feels no one knows who she is anymore. Maybe Braunwyn is figuring that out.

Grievances against Braunwyn are all being aired. Elizabeth was very candid with her in Arrowhead and texted her a long message when they got back, no response. She was hurt because she thought they were closer. Then, the issue of Braunwyn digging up info on Elizabeth comes up. Shannon gets angry because the initial blame was put on her like she was the puppet master. The attack, for a moment, turns to Elizabeth. She said she knew Vince Neil, tried to call him for Shannon, but didn’t really have his number. Just proved to the ladies she is fake, which is what they have been saying all along. Kelly says to cut her some slack as Braunwyn is never honest.

Shari is now the topic and Gina asks if she is in love with Sean. She says she loves both him and Shari and she will fight for her marriage. But, it’s a lot deeper. Kelly notes Braunwyn hates Newport and she says she does so she is told to move. Braunwyn tells Kelly she never shuts up while Elizabeth says Braunwyn is always about peace, love, and acceptance. And now, Shannon must be cut out of her Spanx. All the boyfriends and husbands show up to break the tension.

The End Of RHOC Season 15

At the end, Emily gives a toast, where Bravo does the updates on what happens after. In Braunwyn’s confessional, she comes out and her end bio said she does not speak to Shari anymore. She is one-year sober and her girlfriend, Kris is 29. Gina will give a statement at Matt’s trial. None of the women attended Kelly’s wedding but they did attend the bachelorette party. Emily had her implants removed and lost 20 pounds. And Elizabeth got a substantial divorce settlement.

Next week, on the RHOC reunion, Andy confronts Kelly about her Covid comments. The ladies attack Braunwyn about her marriage and arrogance. Shannon’s drinking comes up. And they delve deeper into Elizabeth’s past. You can catch it Wednesday night at 9pm only on Bravo.