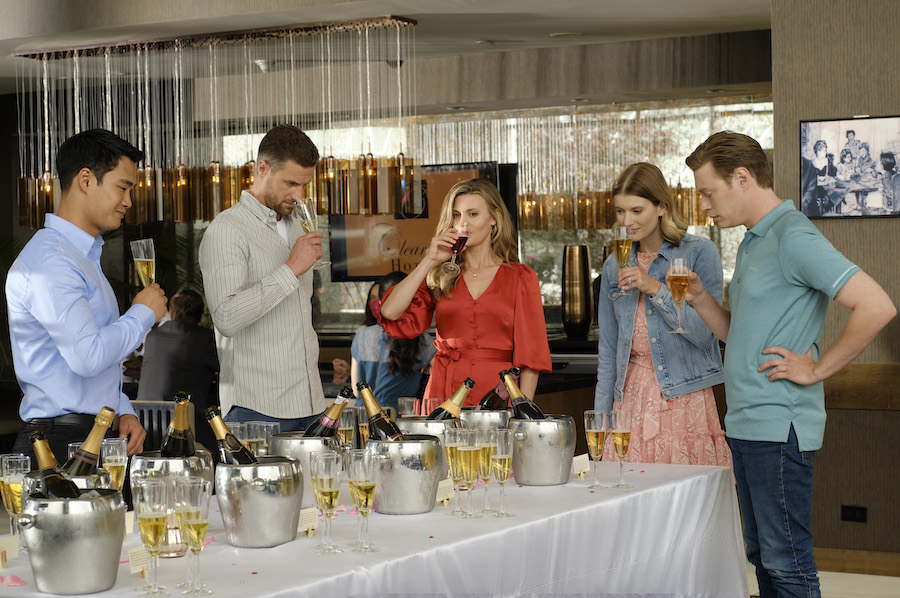 February is certainly the most romantic time of the year, and Hallmark is gearing up with four new Love Ever After original movies this month. This year’s collection looks opulent, romantic, and very steamy. What should fans expect?

Beverly Hills Wedding Kicks Off Love Ever After

Love Ever After movies kick off on Saturday, February 6, at 9 p.m. Eastern, on the Hallmark Channel with Beverly Hills Wedding.  This movie stars Brendan Penney and Brooke D’Orsay (Miss Christmas).

In this Hallmark movie, Molly (D’Orsay) is a small-town wedding photographer with big dreams for her baby sister’s wedding. Their small wedding budget doesn’t stop Molly. She signed them up for a dream wedding contest in Beverly Hills. Best of all, they win.

But, there is one problem in the midst of all of this is the best man. Cory (Penny) happens to be Molly’s ex-boyfriend, and she is starting to feel those old feelings all over again.

Playing Cupid is going to air on Valentine’s Weekend. Starring Laura Vandervoort (A Christmas Exchange) and Nicholas Gonzales (Christmas On The Range), this movie will premiere on Saturday, February 13, at 9 p.m. Eastern, on the Hallmark Channel.

Playing Cupid is a modern-day Emma. Kerri Fox (Vandervoort) is being set up with David Martinez (Gonzales), by his daughter. It appears she has a new matchmaking business. Sounds like she may be named Emma, although IMDb has not included the name of the actress playing this role.

Hallmark’s Mixed Up In The Mediterranean

Jeremy Jordan (Holly & Ivy) and Jessica Lowndes (Christmas At Pemberley Manor) star in Hallmark’s Mixed Up In The Mediterranean. This Love Ever After movie premieres on Saturday, February 20, at 9 p.m. Eastern, on the Hallmark Channel.

We have some serious twin switching in this romantic movie. Jordan plays a small-town cook who impersonates his twin brother, a talented “big city” chef in an esteemed culinary contest. He has a thing for the woman who is in charge of the event. Lowndes is that woman. However, she believes the chef competing is actually married.  Uh oh. How is this guy going to get the girl and win the contest?

Mix Up in the Mediterranean w/@JeremyMJordan & @jessicalowndes – a small-town cook impersonates his big city chef twin to compete in a culinary contest and falls for the woman in charge of the event, who thinks he is the brother who is married. Feb 20 at 9/8c on @hallmarkchannel pic.twitter.com/V2jEaAEEPP

Hallmark’s It Was Always You

The final Love Ever After movie is the highly anticipated It Was Always You. Premieres on Saturday, February 27, at 9 p.m., Eastern. This Valentine’s themed romance stars WCTH star, Erin Krakow, and fan favorite, Tyler Hynes (On The 12th Date Of Christmas).

What is It Was Always You about? Elizabeth (Krakow) has her engagement plans “thrown into a disarray.” That is because his fiancé’s “free-spirited” brother, David (Hynes) returns home and disrupts their lives. Now, Elizabeth is wondering about what she really wants in life, as she questions everything.

Moreover, the four Hallmark Love Ever After 2021 movies. Some of the titles could change between now and early February. Moreover, these movies promise romance, some new locations, and a lot of love.