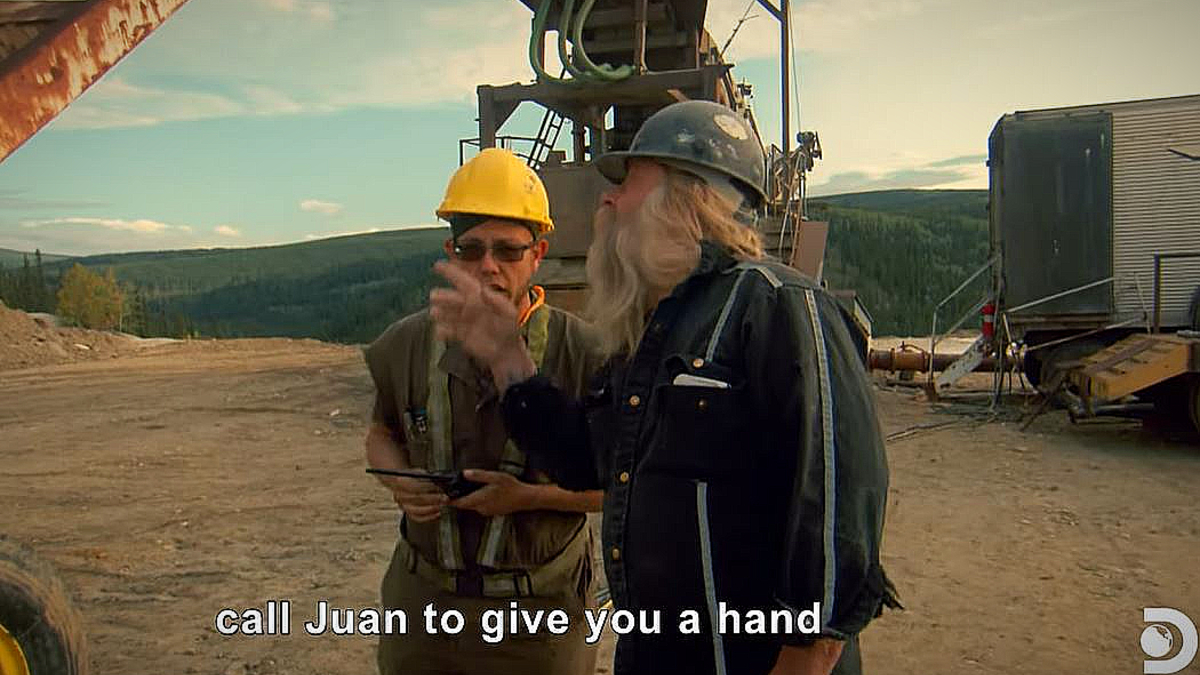 Gold Rush tonight shows how a run of luck can stop on its heels, as Team Beets lead by patriarch Tony Beets suddenly has a conveyor belt issue and must have his son Kevin Beets calls in Juan Ibarra to fix the mechanical issue.

Dawson Creek is where the Beets crew is working, and so far they are behind in their production numbers. Juan was formerly Todd Hoffman’s mechanic who now is on call to help Tony and Kevin with their mechanical issues.

Tony is on a mission to boost his production and scouted a new remote Yukon wilderness spot, a fallow wash plant that he had his eye on a 30 year old 35 ton trommel with a 40 foot drum on wheels that was abandoned. Tony picked it up for $400,000, and now this relic is the latest hunk of equipment in the Beets arsenal. Tony felt it was really well built. Kevin wasn’t as sure on first looks.

Gold Rush has a pretty long run with the finale landing on March 19. So we have some time there. TV Shows Ace exclusive preview below reveals the headaches keep piling up for Tony Beets whose use of the F-bomb shows he’s a bit frustrated.

The preview action for Tony Beets and his crew

Last episode the Beets crew had to haul the heavy load, working from their base at Paradise Hill camp. Tony and Kevin pulled together a seven man crew to drag that new trommel to the tune of $60,000 a day. Mike Beets lead the charge as Beets dragged his new purchase to where he needed it.

This week, the issue is the decayed belt on the conveyor.  Driving up to the site, Beets yells for Kevin and says: “The conveyor belt is too loose. For f***s sake. Shut her down. Gotta fix that f***ing belt!”

The narrator points out that if there’s too much slack the belt will shred to pieces rubbing against the metal frame.

Kevin points out the crack and the extent of the damage as Tony advises him to call in Juan Ibarra. Kevin was one step ahead and had already called him in.

The men realize that the drum is broken as Juan says: “Yeah, I think that’s half a problem right there…this is not good, the tail pulley is broken.”

Juan explains the issue further and says: “So the the belt naturally is going to want to go to the looser side this side’s always loose because the tail pulley’s broken over here.”

Parker took a chance in Alaska with John Reeves of the Fairbanks Gold Company. They come to an accord to test drill some Cleary Creek land outside of Fairbanks.

Fred Lewis has been running the lean surface dirt and dealing with one disappointment after another. Lack of gold production and flagging crew morale has Freddy Dodge’s nephew Kendall and Fred trying to keep their team of veterans together. He also had to call Parker Schnabel for some advice.

He needs to find more money to keep his crew paid. The $15,000 XRF Gun brought in by wife Khara’s dad to look for gold in drill samples is a last chance effort. Last episode we learned he needed to dig deeper to bedrock for any pay dirt worth sluicing.

And Rick Ness is furthering his $100,000 gamble in the deep cut. He was halfway to his goal, and his strategy is to go deep and he and Chris Kruse are following their gut and working hard to make sure this year doesn’t follow last year’s disappointing results.  The last we saw with Rick, he hit an unexpected wall of bedrock slowing his production.

Tune in to see how the Beets’ clan fare, and if Rick Ness and Fred Lewis can catch up to Parker’s haul for the season: