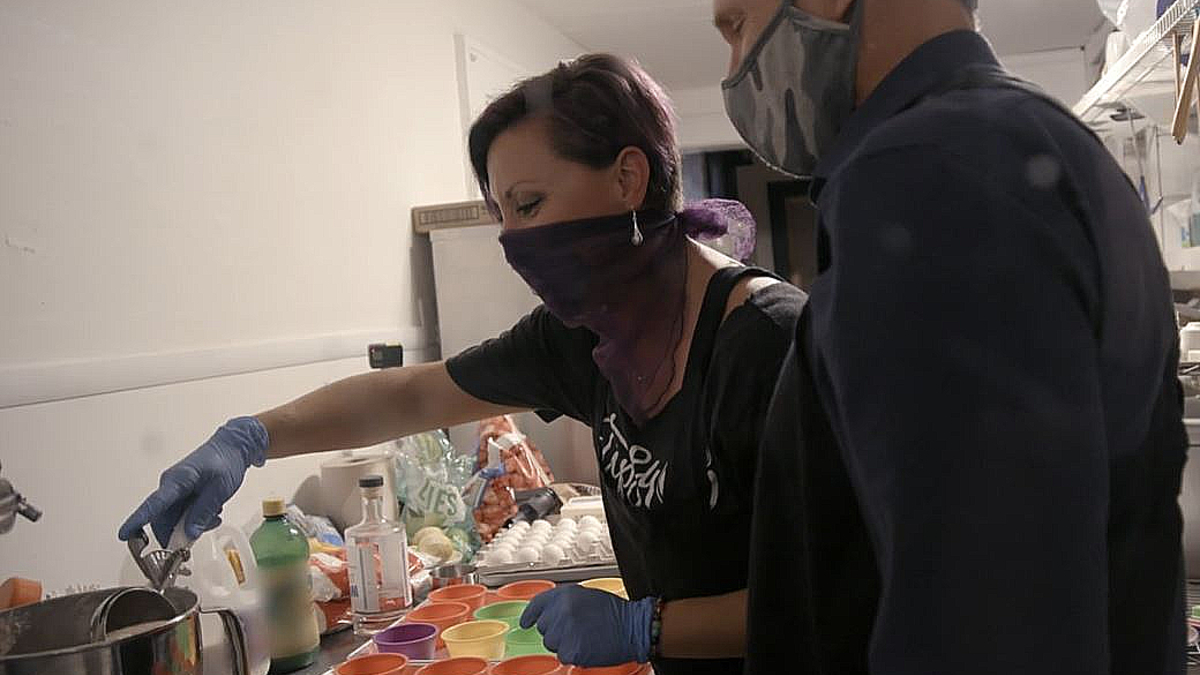 On the premiere of Undercover Billionaire: Comeback City, we meet Giselle, owner of The Tipsy Bean Cafe which is suffering due to COVID like so many small businesses.

Giselle is caught in a numbers crunch, she needs to sell 200 cups of Joe a day to make a profit, and right now she’s selling about 20-40 cups. That’s not enough java slinging to make the beans add up in her bank account.

Enter Glenn Stearns of Undercover Billionaire fame who is pulling a Mulligan in Erie, Pennsylvania, and he is getting his hands dirty with Giselle trying to help her stay in business.

TV Shows Ace exclusive clip below shows how he counsels her, and it is mixed with a solo interview where he explains his thought process and strategy.

In our clip below, Giselle is making cakes and Glenn is helping.  He asks her how many cups of coffee she sells in a day. He reveals he did some homework and that her numbers are woefully short of the mark.

Giselle reveals she does her in-house baking, getting up at five or six o’clock in the morning and sometimes working until nine o’clock at night.

Glenn wants to know more.  He asks: “If you’re cooking the whole time who’s doing like quality control of everything?”

To break this pattern, Stearns says that she needs to hire a reliable person, He says: “She needs other people to come in and help do that so she can think bigger. You don’t have to be a coffee shop owner like Giselle to learn from her mistakes. You can be a carpenter, you can be a printer, you can be any
small business in the world… but you have to find other people as good as you. You have to!  That’s the only way you grow.”

Billionaire Glenn Stearns returns to Erie after he did the ultimate challenge, giving up his name, money and contacts and going undercover. And with only $100 and an old truck, he used only local resources and connections. He built a business worth $750, 000 in just 90 days, Underdog BBQ.

Stearns has repeatedly shared his story in many interviews, that he came from nothing, failed fourth grade and fathered a child at age 14. His success reveals that tenacity and planning can elevate just about anyone, and not to judge the potential that someone might have.

His goal with both series is to show how you can achieve the American dream, even during the pandemic that has served up a big fat economic crisis and abject leveling of so many small businesses.

Stearns says: “Every hour [and] every day counts for these small businesses now, instead of building my own business I’m facing an even bigger challenge
keeping the American dream alive for all of us.”

For the new series that follows Undercover Billionaire, Stearns went back to Erie for Comeback City. He says he fell in love with the town, and has several businesses—including Underdog BBQ—that need an immediate tweak to survive COVID restrictions.

Tune in to see how Giselle fares and if the Tipsy Bean can get the numbers up where they need to be: