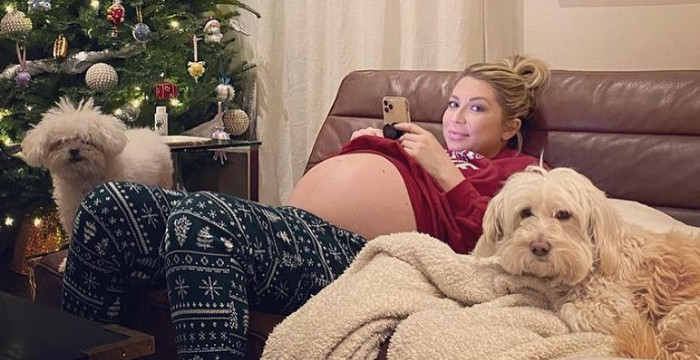 Fired Vanderpump Rules star Stassi Schroeder is days – or even mere hours – from giving birth to her first child. Bravo let the starlet go in June after previous racially insensitive behavior. A week later, Stassi broke the surprising news that she was expecting a baby with long-time boyfriend, Beau Clark.

The couple was supposed to get married in Italy in October 2020. However, the pandemic put those plans on hold and moved the baby plan to the forefront. Stassi and Beau secretly wed in a small backyard wedding in September, revealing the news on what would have been their wedding day in October.

They still plan for a destination wedding in Italy in 2021. In the meantime, their focus shifted to their baby. In June, Stassi’s PR rep gave an early 2021 due date, but the baby girl could arrive before the end of the year.

Stassi’s ‘Over’ Pregnancy at 38-Weeks

Last week, Stassi Schroeder took to her Instagram to share a photo of her pregnancy progress. As Daily Mail reports, she made it to 38-weeks. And she was “over it.”.

By that far in pregnancy, most women would feel the same way. Partly due to discomfort and partly due to eagerness to meet their new baby.

Now in week-39, Stassi Schroeder is doing whatever she can to “get the baby out.” On Tuesday, December 29, she took to her Instagram Stories to ask her followers for any other suggestions.

It seems that Stassi is ready for her baby girl to come out. While she hasn’t given any details about possible names, she may have given a huge hint with the nickname she’s been using for the baby.

What has Stassi tried to help induce labor?

Stassi shared two new posts on her IG Stories. In the first one, she’s walking on a treadmill. On the bottom half of the video, she included a checklist of thing she’s tried, each item followed by a checkmark:

“What else to get this baby out?,” she begged her fans.

Since comments aren’t visible on IG Stories, if fans had suggestions, they sent them directly to Stassi.

The second picture is a photo of the “labor salad.” She tagged the restaurant where she ordered the salad – Caioti Pizza Cafe.

In November, Counting On star Jinger Duggar Vuolo posted on social media that she was trying the same salad. In 2019, Bachelor Nation alum Jade Roper had her baby hours after consuming the salad.

The Sun reports the ingredients of the salad as, “romaine lettuce, gorgonzola cheese, walnuts, watercress and the restaurant’s secret herb-balsamic dressing.”

The salad is credited for the birth of Hilary Duff’s second child. Will it work for Stassi Schroeder? Time will tell! Follow us on Facebook and Twitter for all your TV news.