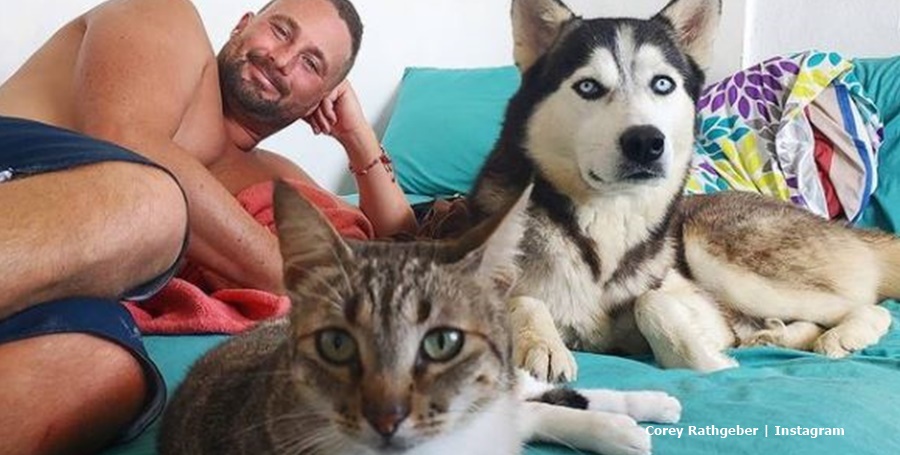 Corey Rathgeber and Evelin Villegas took their Christmas photos for Instagram with their pets. The 90 Day Fiance couple took a lot of them. He and Evelin wore their Santa hats. And the pets both got some red and white trimmings. Corey shared eight photos of them. And, it’s no wonder they took so many as the pets bombed each one of them.

Corey Rathgeber put up a very long list Amazon wish list for Christmas. And, some fans thought it a bit off. Actually, he asked for some really expensive items like a 2020 HP Pavilion 15.6 Inch FHD 1080P Touchscreen Laptop. Other costly items included a quadcopter and a PlayStation. But fans might really like the Christmas photos that he shared the day after Christmas.

The eight photos that 90 Day Fiance star Corey Rathbgeber shared revealed Evelin’s dog and their cat Gata.  Corey captioned them with, “Lol the expressions on Gata and Puppy’s face are priceless!” Then he said that he “couldn’t pick a favorite.” He wished everyone a”Merry Christmas,” while acknowledging the hard times this year. Finally, he asked fans to pick their favorite photo.

Puppy and Gata not feeling this Christmas

Fans know that Evelin’s dog gets along very well with cats. In fact, sometimes her pup’s referred to as a cat dog. Often, she shares photos of her dog and the cat together. And it seems they both have similar sentiments about Christmas and posing for photos. In fact, they are simply not feeling it. Each of the photos showed them bombing it one way or another.

Actually, Gata seems more against the idea than the dog. But even the pup managed to show his feelings about it. In the first photo, Evelin’s dog yawned. Meanwhile, Corey Rathgeber held the cat who looked singularly unimpressed with the whole affair. Mind you, the silly little Santa hat thing on the cat probably accounted for that. After all, a cat must have some pride! In another photo, the dog gave a really bored-looking side-eye.

Most fans selected the fourth photo as their favorite. As one person commented, “Number 4 is my fave. The cats face is priceless ❤️.” And another one wrote, “Number 4 and Merry Christmas 🎄.” This fan agreed, writing, “My fav is the 4th one. But all of them are very nice! Merry Merry Christmas to you all!❤️.”

Mind you, some of them liked the fifth photo In that one, Corey Rathgeber held the cat who looked like it was about to make a desperate effort to flee the photoshoot. One fan noted, “They are thinking: Humans are always making us do this silly picture stuff with clothes on. 😹😹.” Actually, that 90 Day Fiance fan probably got it in one.